“The cobblers’ kids never get new shoes. It’s the same thing for a builder’s family,” Jason Peavy said. “I’m always building houses for clients, but never doing anything for my own family.”

Jason is a local homebuilder and his wife, Hayley, works PRN as a cardiac rehab tech during the school year. They have two daughters, 16-year-old Kaitlyn and 6-year-old Callie, as well as a cocker spaniel named Annabelle.

The couple built their last home together more than 16 years ago when they were a young family, and since then, their needs and their styles have changed. Now with one daughter in high school and the other in elementary, they felt they had outgrown their old home. They wanted more space for their kids as well as more space to entertain friends and family. But as Hayley says, she wasn’t a paying customer.

The Peavys’ new home has been several years in the making. At one point, they had a completely different lot in mind, but everything from clients to the pandemic put their plans on hold. Finally, when the pieces fell into place, they ended up building their home in the Villages at Twin Rivers on a lot that offers a nice amount of privacy and the perk that no one will ever build behind them.

Personal tastes change, but so do design trends, so while their last home was traditional with a darker color scheme, the Peavys knew they wanted something cleaner and simpler this time around.

“Stylistically, what we moved from to this is night and day. We were looking for a modern house,” Jason said. “We didn’t want it to stick out like a sore thumb, but we also wanted something that is a little different and not seen so much in Waco at this point.”

The home’s inclination toward a more modern aesthetic is immediately visible from the outside. It respectfully blends in with its neighbors by using white Austin limestone, which is an ever-popular material in Waco, but it leans modern with an expansive glass and minimally framed front door, large windows and contemporary three-car garage doors. 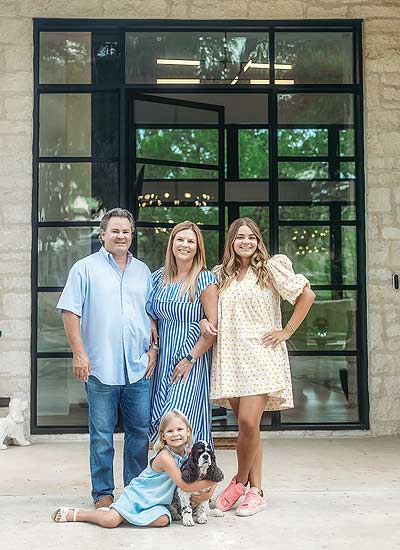 Inside, the home’s many windows provide tons of natural light. It also has generous ceiling and doorway heights throughout that add to its sense of openness. Plus, there isn’t any fussy crown molding anywhere in the house. It’s a beautifully clean slate, ready to complement the Peavys’ current furnishings or adapt in the future when trends might change again.

“This is all bright, open and airy,” Hayley said. “Everything’s black and white, so we can add color with the decor. That’s what we decided we wanted to do. Keep everything simple, and then it’s much easier to change a pillow or art on the wall instead of repainting and whatnot.”

Designed for entertaining, the living room, kitchen and dining room occupy one large space. The Peavys’ last home was largely open concept; however, it had an enclosed formal dining room that often went to waste. This time, they opted for just a single dining area that seats up to 12 and can be used for both casual and formal get-togethers.

A focal point of the home’s main living area is its fireplace. Large slabs of black porcelain tiles with dramatic white veining reach from floor to ceiling.

“It’s kind of like an art piece at the center of the living room that captures your eye,” Hayley said.

The kitchen has white shaker-style cabinets, high-end appliances, a custom black shiplap hood, a stacked subway tile backsplash, leathered black granite countertops and a central island. Rather than going with island seating that faces toward the cooking area, which would have meant an occupant’s back would be to the living room, the Peavys opted for an extended seating area that allows their guests to sit perpendicular to the action and participate in conversations happening in either the kitchen or living room.

“It’s a breakfast table, it has tons of storage underneath, but we also use it as a serving area. I want to use it as big charcuterie board,” Hayley said.

Just off the kitchen is the mudroom that has a desk area for Hayley, the laundry room and a walk-in pantry that includes more cabinets and another countertop space in addition to the typical shelving.

“I just wanted the countertop, so I didn’t have to put all the little appliances in [the kitchen], Hayley said. “We can keep everything in here, and you can make your coffee in here.”

In both the pantry and kitchen, several of the cabinets have custom glide-out shelving that allow things like the cooking utensils or the kids’ snacks to stay organized and accessible.

Unsurprisingly, function and organization were key in the laundry room’s design as well, which received Hayley’s special attention.

“I just wanted fun and lots of space in here because, you know, us moms spend a lot of time in here,” Hayley said. “I wanted a space to fold. I did double hanging racks and cabinets with built-in hampers for lights and darks.”

An area that took a lot of Jason’s focus was the wine cellar. He fondly calls it his “rabbit hole.”

“I’ve got a pretty big collection,” he said. “What started out as a small thing with friends and just having a glass or bottle of wine here or there has turned into a collection. We’ve come to like a bunch of different varietals, and there are different wines for different occasions, but the most special bottles would be our birth-year wines. When you have a special occasion, let’s say you turn 40 or 50 or 60 or whatever, you’ve got a bottle that you can open and drink that’s as old as you are.”

Several years ago, the Peavys took a trip with friends to Oregon. While they were casual wine drinkers before their trip, their introduction to the Oregon wine industry developed their appreciation and interest. 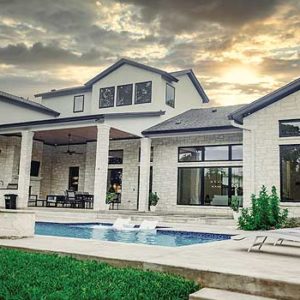 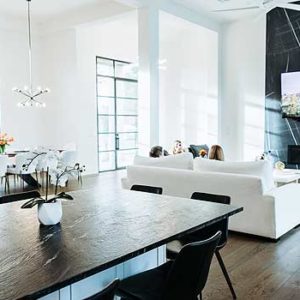 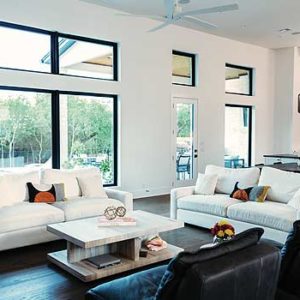 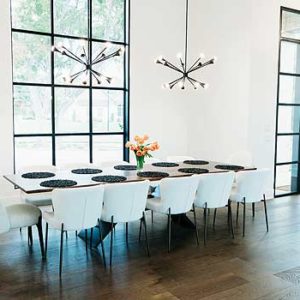 “Everybody knows Napa [Valley] and California [for its wine industry,] but there’s a lot of wine in Oregon that people just don’t know about,” Jason said. “It’s not as big of a destination, but there’s some fantastic wine up in Oregon, and I would say a large part of my collection is from producers out of Oregon.”

Also on the main floor, the primary bedroom is spacious but elegant in its simplicity. It has a bank of windows that overlooks the pool and backyard and minimal furniture. The primary bathroom features a single floating vanity that stretches across the room. There’s also under cabinet accent lighting, dual sinks, higher-end matte black fixtures, marble countertops and a free-standing soaker tub. The flooring is a faux-marble porcelain tile that’s easy to maintain. In addition to its traditional shower head, the shower also has a hand-shower and a rain head that’s mounted flush with the ceiling. At the far end of the bathroom are Hayley and Jason’s individual walk-in closets.

“We each wanted our separate spaces,” Hayley said. “And then we did built-in dressers in each of the closets, so we didn’t have to have furniture in the bedroom.”

While the hardwood flooring throughout much of the home is a wide-plank, but unassuming, medium-stained wood, several occurrences of flooring in the home’s smaller spaces tend to use fun, modern patterns. Each of the his-and-her closets features a different geometric tessellation on lushly padded carpet. The downstairs half bath features an accent wall of glossy white subway tiles paired with a petal-like mosaic tile on its floor. In the laundry room, black and white chevron zigzags across the floor while black and white diamonds are used for the utility sink’s backsplash.

Jason’s home office and Callie’s bedroom are also on the main floor. On the second floor is a game room, guest room and Kaitlyn’s bedroom. When it came to the teenager’s room and bathroom, her parents gave her a lot of freedom in the design. For example, she chose a mint green chandelier instead of a fan in her bedroom, and she has gold-colored and acrylic accents in her bathroom, unlike the rest of the home, which has matte black draw pulls and knobs.

“All the hardware, she went and sourced it herself,” Jason said. “Everything she picked, she did on her own. She picked light fixtures, her bedding and décor. She’s got wallpaper going up in her bathroom. She put her own stamp on it.”

The Peavys spend a lot of their time in their backyard, which is set up to entertain almost any size group. Under a ceiling of lightly stained cedar, there’s a dining table, a lounge area with a TV and fireplace, as well as a built-in grill, Green Egg and sink. A barbecue smoker sits just off the patio. Then there’s the pool that’s surrounded by additional seating, another table and pool shelf loungers.

“We’re outdoor people. We love being around water,” Jason said. “Our youngest, she’s a mermaid. She swims in the pool every chance she gets. I would say most evenings, we probably spend out here. It’s nice because at about 5 o’clock the whole pool will be in the shade. The way it’s set up, you get the seasonal breeze back here, so it’s cool in the evenings.”

The Peavys have plans for wine tastings with their wine group and football watch parties in the fall, but even in the Texas summer, they’re able to regularly have friends and family over to enjoy the space, and they didn’t waste any time breaking it in.

With their other place sold, the Peavys had to be out of their old home and into their new one by July 1 of this year. They moved in with a week to spare and decided to have their first get-together right away to celebrate the Fourth of July and Jason’s birthday.

“We had a big group of friends over, and it was kind of crazy,” Jason said. “We got the house finished, but we left the pool to be one of the last things done. Well, basically I was borrowing water hoses from anybody and everybody I knew to make sure that we got the pool filled up. It was a mad dash for two days so we could have the party.”