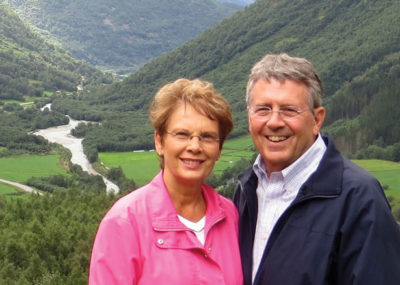 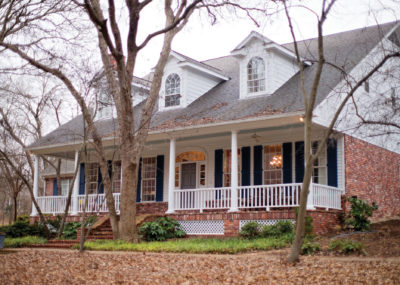 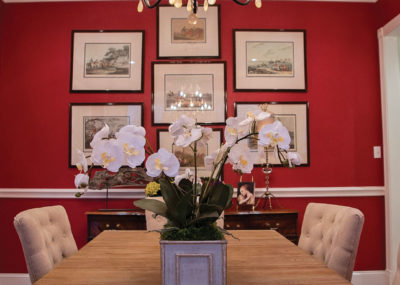 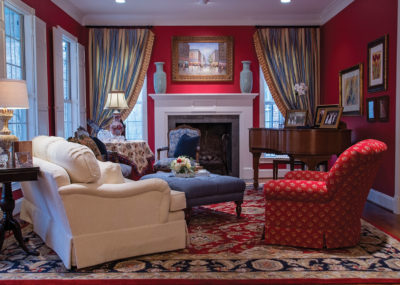 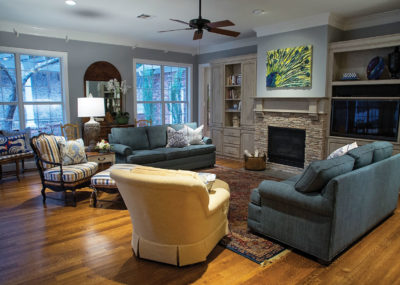 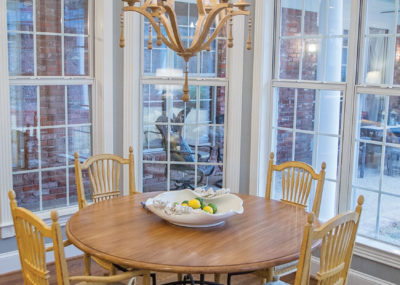 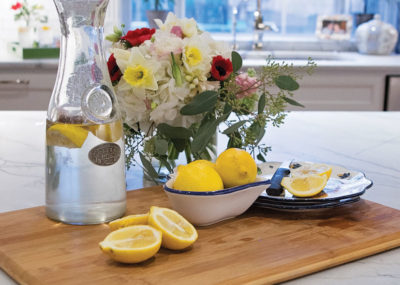 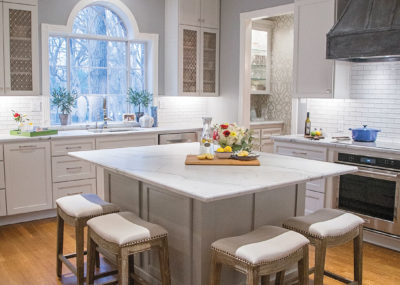 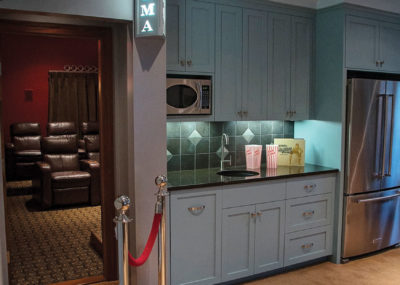 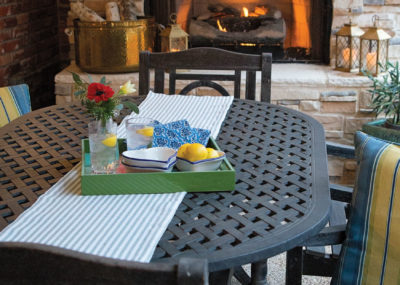 As you turn into Pat and Ken Ross’ driveway off Bosque Boulevard, you get an almost immediate feeling that you are somewhere miles away. The noise of the traffic on the road behind seems more hushed than before, and as you begin to take in the details of the grounds, each feature you notice suggests that you have arrived at a private country retreat.

A circular stone-paved driveway slopes up to the stately colonial house. To the right, a deck and a pool are enclosed by slender iron fence rails. Throughout the front yard, weathered-looking lampposts add a touch of rustic charm. And to the left are the trees — leafless and tired on this chilly winter day, yet still giving the house its overall sense of seclusion and elsewhere-ness.

As it happens, this out-in-the-country feeling is just what drew the Rosses to the house when they purchased it 11 years ago.

“We liked that it was close to everything but felt that you were away from town and that it wasn’t a typical city-type house like we’ve had before,” Ken said.

His wife, Pat, agreed, “When you drive into the driveway in the summer with all the trees around, it feels like you’re in your own oasis.”

“Oasis” is certainly an apt word to describe the surroundings of the Ross home. “Idyllic” is another that comes to mind with the various creatures that frequently visit the Rosses’ backyard.

“We see a lot of wildlife on the hill behind our house,” Pat said. Foxes, bobcats and owls have all made an appearance — and in what must have been a particularly magical sighting, “One recent Christmas Eve we saw five deer and thought they must be helping Santa.”

Ken and Pat met while attending Baylor. After getting married, they lived in Longview for 30 years where Ken worked as an attorney and Pat was a homemaker. The couple then moved to Edmond, Oklahoma. They lived there eight years before retiring in Waco. With three grown children and seven grandchildren who all live in either Austin or Rockwall, they decided Waco was a good middle point.

Looking at the front of the house, a stone pathway bordered by red bricks leads up to a wide brick porch with simple white columns and railings. Three dormers above the patio roof add an element of storybook charm, and a wooden bench swing completes the homey-ness of the whole picture. On either side of the front door, bright blue shutters accent white siding, while tall windows offer a peek at the warmth inside.

And warm it is indeed.

“We both love color,” Ken said, and that love is evident from the moment you walk inside. In a house with so many things to notice, color is perhaps the first thing that strikes the eye. The wide entryway features bold, bright wallpaper: a traditional floral design in green, red and gold with soft blue accents.

Directly ahead and to the right, a dignified staircase marches up to the second floor. Ahead to the left, a narrow hallway stretches on, offering the smallest peek into the recently finished kitchen. At the end of the hallway, a green Chinese screen — another striking pop of color — hangs over a window that teases a glimpse of the backyard.

But drawing immediate attention are the rooms directly to the right and left of the entryway. Both the formal sitting room, to the left, and the formal dining room, to the right, have walls with a magnificent dark shade of red. I asked Pat about the thought behind such a bold color choice. When the family lived in Oklahoma, she said, the dining room in their home had red walls that they enjoyed so much it seemed an obvious choice for their home in Waco.

And the effect the color has in the two front rooms is indeed striking. The dining room, with its long, rectangular table, large mirror in an ornate gold frame and wrought iron chandelier, suggests formality. However, certain touches, like the fawn-colored upholstered tufted chairs around the table and the natural light that floods in when the solid wood shutters are open, evoke familiarity.

The sitting room has a modern coziness, complete with a black stone fireplace and white mantel, that makes it a room in which someone might very happily pass a winter’s day reading and enjoying the view outdoors. At the same time, the room has elements that give a feeling of stepping back in time. A gleaming piano stands in one corner and a handsome grandfather clock in another, the red walls bringing out the cherry tones of its polished wood.

Across a narrow hallway from the sitting room is Ken’s study, which — perhaps more than any other room in the house — reinforces the woodland location of this home. Pocket doors with glass panes slide shut to offer the room a degree of privacy, making it a retreat within a retreat.

The walls are painted a soft green, which is complemented throughout by the original wood trim and molding. Wooden cabinets, designed by Renae Palmer of Palmer Davis Design, which oversaw the renovation of the house, complete the sense of rustic elegance.

A window opposite the sliding doors offers a view of the woods bordering the backyard, and the front yard is visible from the study through the windows in the sitting room across the way. A small stuffed bear adorning the floor humorously hints at the closeness of nature all around the house.

But the crowning feature of the study, and the piece that ties together the green walls and the brown trim in particular, is a stunning marble credenza, dark green and shot through with streaks of brown and white. When I asked the Rosses where they most enjoyed spending time in their house, Ken admitted, “I almost defaulted to [the study] because I do enjoy spending time in there.”

But Ken and Pat both agree that their favorite part of the house is the kitchen and adjacent living area, which they call the den. These rooms are clear evidence of their love to entertain, and with grown children who have families of their own, they are often welcoming guests.

The kitchen, the most recently finished renovation in the house, seems to be in every respect the perfect model of a modern kitchen. Spotless white cabinets finished with silver hardware, sleek silver appliances and a large island make this room beautiful and functional. The white countertops with gray marbling are quartz from MTTS Granite and Marble. Pat said the rest of the kitchen was designed with those quartz countertops in mind.

Other custom details abound, such as the vent hood above the range. As one of few dark pieces in a kitchen gleaming with white and silver tones, it certainly makes an impression. Pat had seen pictures of metal vent hoods in home magazines and worked with Jill Davis to design an alternative, which was crafted from wood and finished to look like metal, complete with round nail head details.

Especially noticeable in the kitchen are the beautiful wood floors. They are sanded and finished oak, with a warm, golden glow. Where silver and white give the lighting in the kitchen a cooler, crisper quality, the soft, polished brown seems almost to give off its own light, and the natural wood grain offers a variation in texture, at least visually. The floors are all original to the house, Davis said, and their particular look was achieved with nothing more than a sand and finish.

The kitchen, including the same oak floors, flows easily into the den, both in terms of space and color.

“[We find that] visitors want to congregate in the kitchen, so we wanted to open up that area,” Ken said. A counter-height wall partially separates the den and the kitchen, allowing for easy conversation and visiting between the two rooms. The soft gray walls of the kitchen carry over into the den, which has a decidedly more muted color palette than the front rooms.

A stone fireplace in shades of gray, cream and sand provides a central gathering point, and the neutral colors of the stone are echoed in the creamy weathered finish on the mantel and on the tall built-in shelves that flank the fireplace on both sides. A unique painting above the mantel provides a singular burst of color: thick strokes of vibrant blue and yellow paint depicting a peacock and its plumage. The painting is by Justin Gaffrey, an artist the Rosses met while spending time in Florida.

Behind the den is a breakfast nook, over which hangs another chandelier — this time a simple wooden one. This area is surrounded by windows, which look out onto the covered patio and backyard, another perfect place for those family gatherings.

“The grandkids really do enjoy being out there,” Ken said, adding that one of their daughters has often brought friends from a church group over to the house for retreats. The focal point of the patio is a large stone fireplace, similar in colors to the fireplace in the den, but set against the red brick of the house, it stands out even more.

“We have to credit the previous owners [for the outdoor fireplace],” Ken said. “I probably would not have added one in, so I’m glad they did.”

On the second floor of the house are more amenities that add to the retreat-like feel of the home. First up is a well-furnished exercise room, with walls in a calming shade of pale blue. A set of French doors at the back of the room leads out to a tiny balcony and railing, offering a bird’s-eye view of the handsome kidney-shaped pool that you see as you first drive onto the property. The fitness center, being on the second floor and having a view of the pool and woodland surroundings, also comes with a look toward the road just behind the house. This is the first — perhaps only — reminder to someone inside that, as tucked-away as it seems, this house is actually only steps away from a road that, if not home to heavy traffic, is at least frequently traveled.

But it’s easy to forget the proximity to the road once again when you walk into the theater — complete with a lighted sign announcing “Cinema” — adjacent to the exercise room. This room seems to be soundproof, even with the door still open. Its deep red walls and dark leather chairs (the room seats 11), create the impression of a cozy cave.

Having a media room has always been a dream of Ken’s, and this theater is one of the first things he and Pat added to the house when they moved in.

“We do enjoy entertaining, and sometimes when Baylor is playing an away game we’ll have people over to watch it on the big screen,” he said. Just this past weekend, their son and grandsons were visiting the house. The son enjoyed using the exercise equipment, while the grandsons played video games in the media room. Looking, as they were, for a place to entertain a large family, it seems the Rosses have indeed found a place where generations of family and friends will retreat for years to come.