The Roberts family found their quaint home while walking around the block in Castle Heights. The 1926 cottage wasn’t for sale, but Sarah and Korbett imagined their boys, Caleb, now 6, and Benjamin, 4, playing in the front yard and climbing the live oak and sycamore trees lining the property. Since moving into the home, they have welcomed their third son, Andrew, now 10 months old.

“All the trees made it look like a tree house,” Sarah said. “We liked the yard for our boys. We’ve always lived in older homes, so we loved the charm.”

But they also loved the idea of moving to Riverside, where there’s plenty of space for the boys to explore. So the Roberts family bought a lot in Riverside and discussed building a home there.

Then the Castle Heights cottage went on the market, and they quickly took a tour. But they waited to make an offer.

“It had a funny flow,” Sarah said. “Older houses don’t have an open layout at all. There were lots of opportunities for updates. Upstairs, there was a bathroom in the middle of a hallway. We didn’t make an offer right away, but then we decided to take on the challenge.”

They reached a compromise: keep the lot in Riverside and stay in Castle Heights so they could live close to their office on Austin Avenue, where Sarah works for KSR Advantage and Korbett offices as a family business advisor for Erben Associates, based in Austin.

“Our worlds are here, and I’ve always liked this street and the sense of community in this neighborhood,” Sarah said. “The final draw to this home was the location. Korbett bikes on the trails in Cameron Park. But if we could live two places, we would. We still go out there [to the Riverside lot] and throw rocks in the water. We’d love to pick this house up and have it right next to the river.”

The Roberts family moved into the home three years ago and made renovations for a long year.

“Renovations always take longer than you think they will,” Sarah explained.

Downstairs, they gutted the kitchen and added all new appliances, renovated the master bathroom and bedroom, reconstructed the original fireplace in the sitting room and removed paneling in the family area. They also added a ceiling to the downstairs portion of the two-story sunroom, creating a breakfast area by the kitchen.

“It was a two-story sunroom with a spiral staircase,” Sarah said. “The woman who lived here would sunbathe upstairs with her friends.”

Outside the house, they built a side porch connecting the dining room to the side yard. They added landscaping, stone pathways, an iron fence, enclosed a garage and replaced the yellow paint with a crisp alabaster shade. But they kept the ivy on the rock wall, as well as the basketball goal, Korbett’s one request when moving into the house.

“The porch was important to me so we could spend time outside as a family,” Sarah said. “Previous homeowners had renovated the bones of the house, the roof and windows. A lot of people have worked on this house and made additions.”

When the Roberts family moved in, they tried to create cohesiveness from the original build to the additions made in the 1960s.

“We wanted to retain a lot of the character of the house while making it more functional for our family,” Sarah said. “We wanted to create unity. Although the additions weren’t something I liked when we moved in, I’ve grown to love the L-shape of this house. I can see through the windows and keep an eye out on kids playing and being kids, and it has lots of windows with a view of the trees.” 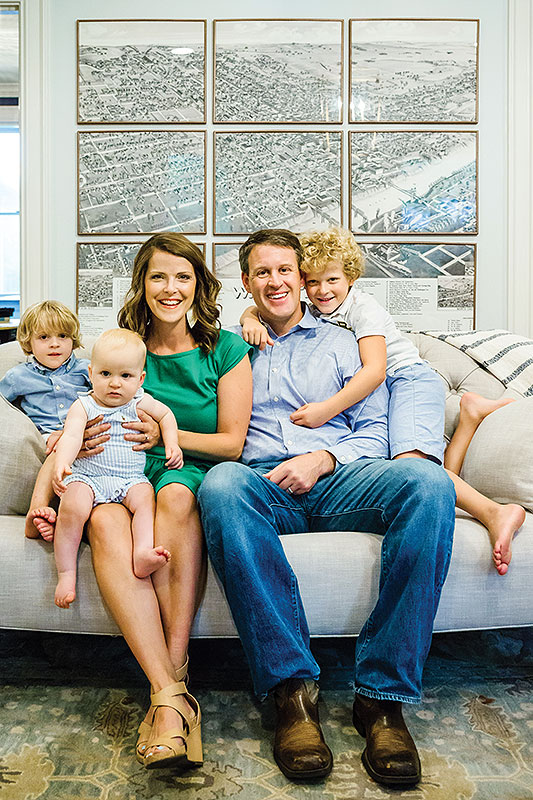 During renovations they consulted with previous homeowners, Dr. Bob and Nancy Grayson, who moved next door after raising their family.

“The Graysons loved this home,” Sarah said. “They knew a ton of details about the house and were always offering advice. When you own an older home, it’s hard to know what people have invested in. It was great to ask questions and know the history.”

For the remodel they worked with The Alford Company and consulted with Catherine Dolen regarding design work on the final layout of the kitchen and master bath.

“I was trying to make sense of the bathroom that dead-ended in the hallway upstairs,” Sarah said. “Catherine was the one who told me to get rid of it. She has a great eye.”

Sarah also worked with her grandfather, Bill Chamlee, an architect in Temple.

“My granddaddy drew some plans, which was sweet,” she said. “He’s a very special person to me. We spent a lot of afternoons at my granddaddy’s office, and I remember a lot of his architectural drawings.”

The Roberts family moved into their house in the middle of renovations, before the kitchen was finished.

“We set up our laundry room as a makeshift kitchen,” Sarah said. “It was very rustic. We set up a few appliances, crockpots and a coffeepot.”

“You’d be amazed by what you can make in a crockpot,” Sarah said with a laugh. “Our boys were young, so we ate a lot of fruit and yogurt.”

Sarah spends most of her free time in the kitchen, which is bathed in white from the marble countertops to the cabinets. They built a butler’s pantry with a wine fridge adjacent to the dining room. Above the butler’s pantry they added tongue-and-groove panels to the ceiling, the perfect complement to the white cabinets and coffee-colored floors made from plank wood tile in a herringbone pattern.

“The kitchen was one of the spaces where you could tell there were lots of additions because there were dividing walls,” Sarah said. “With everything we did, we tried to emulate what was here before. We played off the butler’s pantry with the cabinets in the kitchen. We added more space. I love to cook, and like many families, we spend a lot of time in the kitchen.”

The breakfast room’s aqua ceiling matches the butler’s pantry. The room is decorated simply, drawing attention to the wall of windows and the long dining table, which was built with wood from the renovations.

Through the glass doors in the breakfast room, you can see the sitting room, one of Sarah’s favorite spaces. She designed this room as a retreat, a “counter to having three boys in the house,” by blending shades of gray, blue and cream with gold accents. A piano — a family heirloom — sits beside the fireplace. 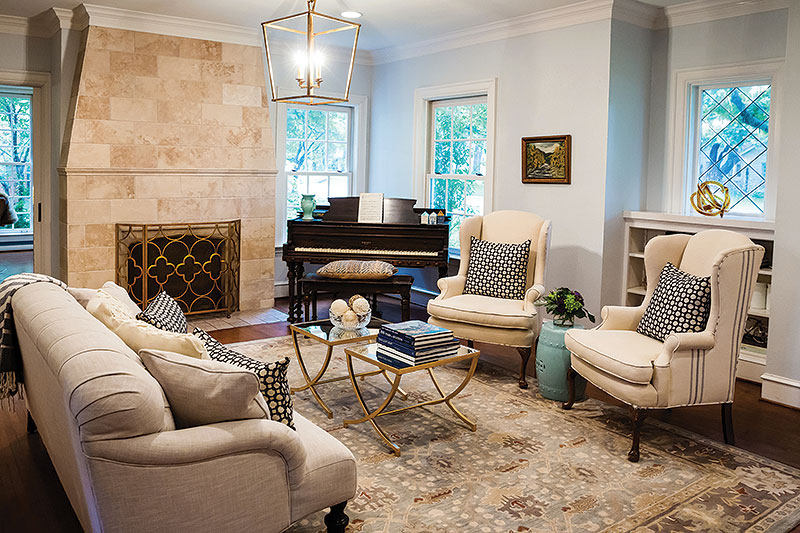 “It’s always a peaceful, quiet place to slip away and read a book,” Sarah said of the sitting room. “It has calming, neutral colors. The kids don’t play in there often. We do most of our activities in other rooms. It’s a nice little retreat.”

The sitting room leads into the formal dining room, where they added glass doors opening to the side porch. The focal point of the room is a chandelier from the 1920s hanging above the dining table, the Roberts’ first piece of furniture.

“We bought it as newlyweds in our first year of marriage,” Korbett said.

Through the hallway is the master bedroom and bathroom, another major renovation project. The bedroom walls are painted in Sherwin-Williams rhinestone, as is most of the house. The bathroom is washed in white and features a chandelier above the tub.

“The master bathroom was important to me,” Sarah said. “There was so much space to work with [in the master bedroom], so we expanded the bathroom. It was great to open it up. We took the tub from the original master bathroom, which was upstairs.”

When the Roberts family moved in, the new master bedroom wasn’t finished. So Sarah and Korbett stayed in the original master bedroom upstairs, which is now a guest room. The room is still one of Sarah’s favorite spaces because of the “beautiful morning light and view of the trees,” she said. 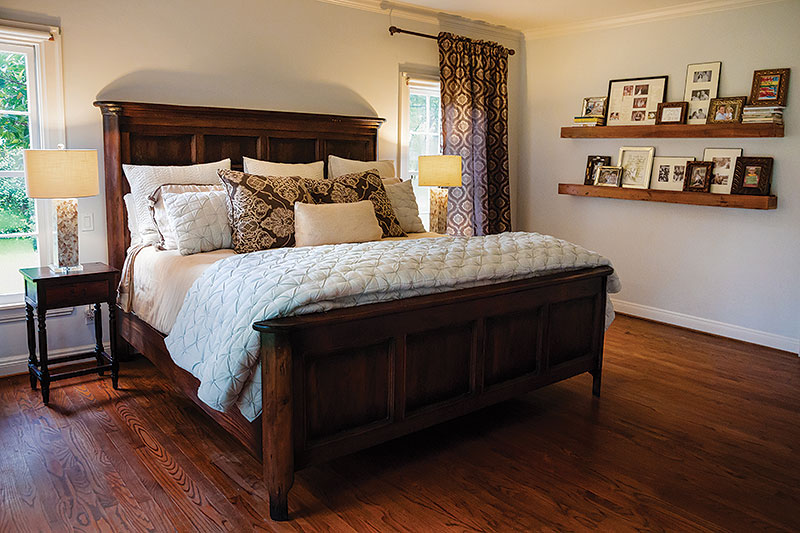 One of Korbett’s favorite features — besides the all-important basketball goal outside — is the stairs. There are two sets of stairs, one on each side of the breakfast room.

“When the boys have extra energy, I’ll time them running up the stairs,” Korbett said. “There aren’t a lot of spaces that are off-limits in our house.”

Sarah said this is why their home looks “lived in.”

The upstairs area, featuring the kids’ rooms and playroom, is the boys’ domain. The playroom was originally a bedroom and bathroom until the Roberts gutted the space. They added built-in cabinetry to store toys and games.

“It’s been fun to see the boys enjoy their space,” Sarah said. “We love how the upstairs opens into a playroom. The boys use the space how we hoped they would. Korbett and the boys are always playing in the side yard. They play every sport under the sun.” 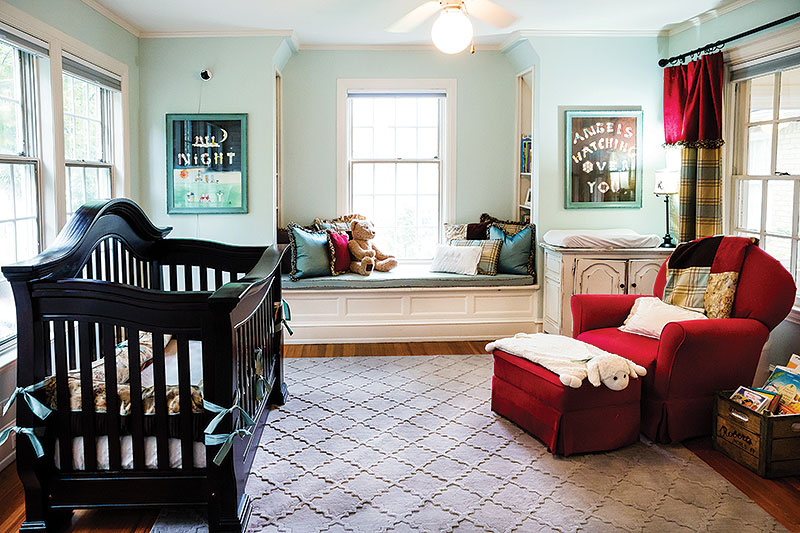 When the boys aren’t in their playroom, they’re exploring the nooks and crannies of the home.

“The older features are some of the boys’ favorites,” Sarah said. “They love finding spaces to hide in and climbing through the windows and doors. They love looking through the keyhole in the front door.”

During the remodel the Roberts family spent six months traveling to England and staying in a hotel and a furnished apartment by Baylor.

“That time was a blur,” Sarah said. “Benjamin had turned 1. His first steps were in a hotel. But it was a good year. Our kids could walk around campus.”

In the process of buying and remodeling the home, Sarah and Korbett kept their boys in mind. They wanted a space where the boys could play but also feel safe and surrounded by community.

“For us, the thing that was almost as important as the house was this neighborhood,” Korbett said. “The boys can play outside. We can take a walk and see the gorilla [on Austin Avenue]. I’m excited our boys will make memories here.”