Ellie is the daughter of Thomas George Chase III and Cara McCraney Chase.

She is the granddaughter of Helen and Thomas G. Chase, Jr., of Waco, and Marilyn and Richard McCraney, of Atlanta, Georgia.

Soft-spoken and always finding ways to serve others, Ellie said she tries to live by a quote her late aunt, Mary Lacy Chase, shared with her: “The path is not to happiness. Happiness is the path.” And Ellie’s path is paved with the people she loves.

“I try to surround myself with people who like to have fun and have a good sense of humor,” she said.

Ellie hails from a line of Wacoans and Cotton Palace royalty. Her father, George, was a royal escort in 1988 and her aunt, Felicia Chase Goodman, was queen in 1991. Ellie’s sister, Claire Elizabeth Chase, was a royal attendant in 2005 and a princess in 2016.

“Ellender would loved to have seen Ellie in this special role and, even more so, following in her footsteps to the University of Texas,” Cara Chase said.

Ellie is a senior at Waco High School where she is a member of National Honor Society. She has run cross country all four years of high school and cheered her freshman and sophomore years. Though she doesn’t have one favorite subject in school, Ellie said, she took a particular interest in her junior government course.

“I loved my dual credit U.S. Government class last semester. Since this is my first year to be able to vote, it seemed really relevant and helpful to learn the details of our government so that I can be better informed when I cast my first vote.”

Ellie attended Hillcrest PDS for elementary school and named her kindergarten teacher, Kathleen Minshew, as her favorite teacher of all time.

“She made learning fun at such a young age and we still keep in touch. I recently had her as my guest at the Waco High Academic Achievers banquet,” she said. “More recently, Scott McClanahan has been very inspiring and helpful with my AP classes and in the process of finding the right college.” McClanahan is director of Advanced Academics for Waco ISD.

This fall, Ellie will attend the University of Texas, where she has been accepted into the Liberal Arts Honors program.

“I’ve been watching my sister, Claire, enjoy college life and all of the new experiences. I’m fairly independent, so I can’t wait to live in Austin and meet new people.”

Ellie is a devoted member of National Charity League (NCL), an organization that encourages mothers and daughter to serve the community together. 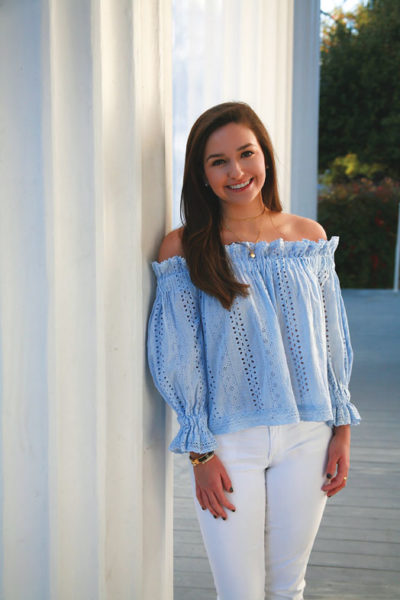 “I have spent a lot of time working with the children at the Family Abuse Center and it is probably my favorite volunteer activity,” Ellie said. “There’s nothing better than playing with the babies. I also loved my Meals and Wheels pet food delivery route. It was fun to get to know the clients and their adorable pets. One of my favorite people on the route always greeted me with a big hug. Through NCL, I’ve had so many volunteer opportunities that I wouldn’t otherwise have had.”

“By beginning to volunteer at a young age, kids can learn that it is always important to be involved in their community and to help others, Ellie said. “Because I started at any early age, I feel like volunteering will always be a priority in my life.”

Ellie is a graduate of the 2017 Teen Leadership Waco class, which is a leadership development program sponsored by the Greater Waco Chamber of Commerce. She was selected as a member of the Waco Youth Council, which helps address issues affecting teens in our community.

“We have members from schools across Waco which helps us to think about the community as a whole, rather than just our individual issues,” she said.

As a junior, she was a Symphony Belle and is a member of St. Paul’s Church, where she has been an acolyte since the seventh grade.

Outside of school, Ellie likes to spend time with friends and play with her German Short Haired Pointers, Ace and Ranger. She likes taking yoga classes with her mom and enjoys cooking and trying new, healthful recipes. Ellie also loves to travel.

“I love to go anywhere in Colorado,” Ellie said. “It’s fun to ski in the winter and escape the Texas heart in the summer. We used to go to Mexico for New Year’s with my great grandparents when they were still alive and those are some of my favorite memories.”
Ellie’s easy-going personality makes her fun to be around.

“Ellie has been a delightful and easy teenager,” Cara said. “She’s pretty independent, so sometimes we have to force her to hang out with us. But, she always joins us with a smile on her face and is great company.”

Camp Longhorn Inks Lake is a 10-year tradition for Ellie — nine years as a camper and last summer as a counselor.

“I had the youngest cabin of girls and absolutely loved them,” she said. “I can’t wait to do it again this summer. Camp Longhorn is one of my favorite places in the world.”

Before heading to camp, she’ll take a trip with her sister and grandparents. After that, she’ll make her way to Austin.

Growing up in Waco has been a perfect fit for Ellie, she said.

“I love the size of Waco because it allows me to bump into someone I know almost anywhere I go,” she said. “It’s also fun to be able to have friends in other schools around Waco.”

A favorite spot where you might run into Ellie and her friends? Lake Waco.

“I like how close the lake is, which gives me the opportunity to enjoy it with my friends without much pre-planning,” she said.

“Those are my favorite places to take my friends and family when they visit from out of town,” she said. “My dad and I have a Friday morning tradition of breakfast at Lolita’s, so that’s definitely a family favorite.”

Ellie’s royal gown is both feminine and traditional in design. It is constructed of white dupioni silk and overlayed in white lace with antique gold accents and adorned with more than 2,300 hand-placed Swarovski crystal stones. The center panel of the bodice is accented in gold and crystal chain that creates a pin tuck pattern, beginning at the V neckline, down to the waist.

The collar, sleeves and waist are each outlined with a beautiful scallop crystal chain. The skirt continues with the crystal and gold pin tuck pattern down the front panel of the skirt, and is accented with a cluster of stones in each of the diamonds. In addition to the white and gold lace, there are over 20 scrolled gold and crystal appliques placed on the skirt and the train to create more sparkle to the elegant gown. The dress was designed by Brooke Moore, Court Costumes Chairman, and constructed by Susie Thennes of Dallas, Texas.

“It is a huge honor to be representing Waco as Cotton Palace Queen,” Ellie said. “I remember how much fun my sister had when she participated and she has remained close with many of the people she met.”

In her sparkling gown and the traditional Cotton Palace regalia, Ellie said she’s ready for the weekend to begin. Showing warmth and genuine hospitality will be her personal mission during the weekend festivities, Ellie said.

“I’m looking forward to meeting every member of the court and making sure that they all feel welcome,” she said. “The in-town court is such a great group, so it should be easy to help the out-of-towners have a memorable weekend. Cotton Palace is an opportunity to celebrate our past and present, show off Waco’s hospitality, all while making new friends and having a fun weekend.”

Her parents know Ellie is up to the task of making Waco shine.

“I hope that Ellie has fun being Queen,” said Cara Chase, “while also appreciating the responsibility of representing all the best qualities of Waco to our visitors.