Annika’s family history includes three generations of cotton growers — and that heritage gives special meaning to Annika as she represents Waco Cotton Palace this year. Her great-great-grandfather, Ruff Watson, was a landowner in west Texas in the 1920s and 1930s where he and a friend farmed the land for cotton. Her great-grandparents, Ethel and Murray Watson, Sr. lived there for a few years to help with the family business and her grandfather, Murray Watson, who later served as a Texas State Representative and Senator from 1957-1972, picked cotton alongside the workers.

In the small town of Charleston, Missouri, Annika’s great-grandparents, Eva and Harry Warren, planted cotton and her grandmother, Greta Watson, remembers the family hosting migrant workers in their home during harvest season and learning first-hand the difficult nature of the work. Greta and Murray Watson are still invested in the cotton industry. One day, Annika’s parents and uncle Marcus Watson will continue this legacy.

Annika’s first brush with royalty was as a Waco Cotton Palace Royal Attendant in 2006. But her family has been actively involved in the festivities for many years. Annika’s uncle, Marcus Watson, was an out of town Escort in 1990. And Annika’s grandmother, Greta Watson, has been a volunteer in some capacity since the 1970s.

“Our family has been in the Production as a pioneer family and I was in the Baylor scene for a couple of years,” Annika said.

Missy and Randy have sponsored out of town Court Members and Missy has served on or chaired various committees, such as Court Direction, Hotel Liaison, Gifts, Thursday Night Dinners, Program Advertising and Tabloid. Missy also has served as Secretary to the Waco Cotton Palace Board.

Sweet and spirited, Annika is a senior at Vanguard College Preparatory School where she is a Varsity Cheer Captain, Spanish Club President, a Vanguard Ambassador, Mountainview Mentor and is actively involved in the Theater program.

“My favorite subject is Theater,” she said. “It’s so much fun to be able to act as different characters together. We have a lot of fun acting with each other.”

Annika said she has been blessed by many great teachers throughout her years in school, but it’s her Theater teacher and Cheer coach who have given her opportunities to go outside her comfort zone and learn from those experiences.

“I love the teachers at Vanguard because they are so passionate about what they teach and about seeing each student succeed,” she said. “Lana Hickok, my Theater teacher, has taught me to aim high with my goals and to work hard to achieve them. My Cheer coach, Carrie Livesay, has made the traditions and school spirit fun to participate in even though we go to an academically rigorous school.”

This fall, Annika will attend Baylor University where she plans to major in Marketing. She said she looks forward to having the ability to learn how to manage her school and social life.

“I can’t wait to find out who I am along the way,” she said.

Serving others is important to Annika and she said she has found that giving is a very rewarding feeling.

“I enjoy volunteering at the Family Abuse Center because I love getting to spend my time playing with the children in the facility,” she said. “It’s so rewarding to see how happy they are to make new friends.”

Annika said she believes volunteering helps everyone grow to become better people and that young people can learn a lot about themselves and others when they are serving.

“The best way to find yourself is to lose yourself in the service of others,” Annika said, quoting Ghandi. “I have learned that giving to others is the most rewarding feeling I have ever experienced.”

As a mother-daughter team, Missy and Annika began volunteering together early on through the National Charity League of Waco (NCL).

“I remember painting the walls of the Talitha Koum Nurture Center with my mom and other NCL volunteers when I was just six. And what I’ve learned is that everyone can do something to give back and that even the tiniest contribution can make a world of difference for someone.”

Missy said she cherishes her time volunteering with Annika through NCL.

“Having the opportunity to volunteer together has brought us closer,” she said. “Getting to know other moms and daughters and learn about our community along the way has been a joy.”

In addition to her work with National Charity League of Waco, Annika has served as a People to People Student Ambassador, a Waco Symphony Belle and Historic Waco Foundation Brazos Belle.

Besides volunteering and staying active in both her school and community, Annika said she enjoys cooking and baking food for her family and friends, performing (singing, acting, dancing, impressions, and cheering), hanging out with her friends, shopping and babysitting. She also enjoys traveling any chance she gets.

“My family has been able to take some amazing vacations,” she said. “When we travel, we like to get to know the local people and experience the culture — and also trace some family roots. Our family trips are always meaningful that way.” 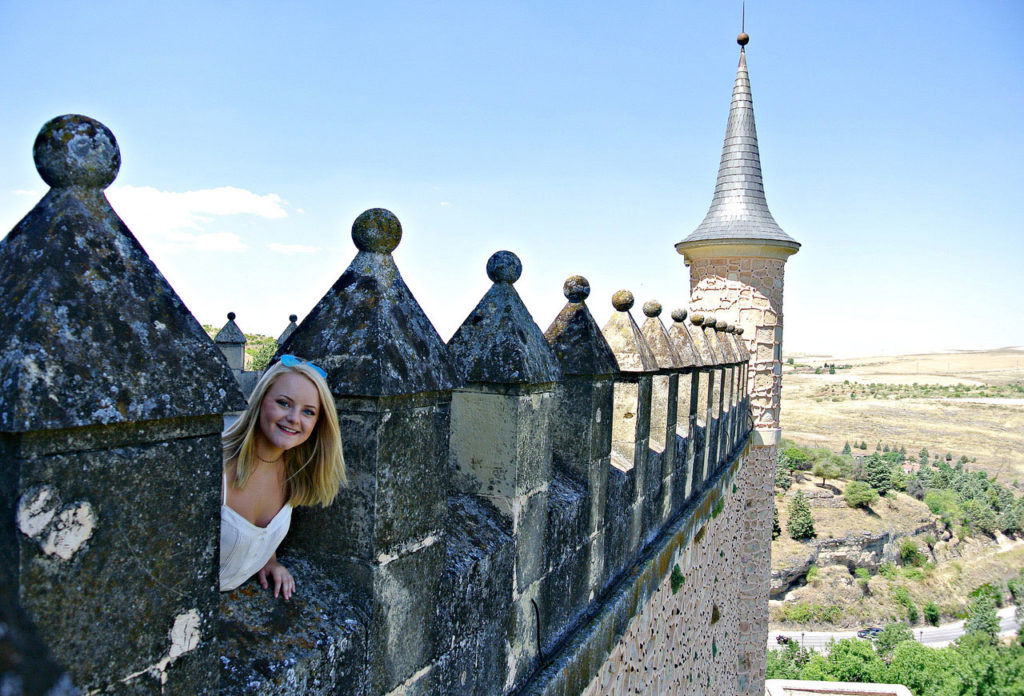 Last summer, Annika had the opportunity to travel alone to Spain to learn the Spanish language with SPI Study Abroad, a program that brings together high school students from all over the world.

“I stayed with a woman who only spoke Spanish and Basque, and not a word of English,” she said. “Luckily, my two roommates were better at Spanish than I was at first and helped me translate and communicate with her and the locals of San Sebastian.”

After just a few days of being immersed in the language, Annika said she could understand what they were saying and could even respond in Spanish. And by the end of her stay, she had a much better grasp of the language, as well as an understanding of the culture, she said.

“I learned a lot about myself and how to manage difficult situations where I didn’t always have a parent to turn to,” she said. “My parents were so awesome to allow me to experience this before college because I now have a better understanding of how the world works, how to manage my money and time, and how to live on my own for a period of time.”

Annika said she enjoys the independence of traveling, learning about different cultures and making new friends through the international travel programs in which she’s participated.

“Of course, I’ve had to help pay for those trips by working during the summer, babysitting and selling a lot of hair ties,” she said.

After graduation, Annika plans to travel back to Europe to become an au pair after going through Baylor’s orientation and Line Camp.

Patience is a virtue that Annika said she holds dear.

And loyalty is a quality Annika deems important in her friendships.

“I take comfort in knowing that a friend will always have my back and will stick with me through thick and thin,” she said. “Also, someone who understands my sense of humor is important, because it would be weird to have a friend who couldn’t genuinely laugh at my jokes.”

She said she tries to put integrity, family and friends, living to be a good Christian, hard work and discovery at the forefront of everyday life.

“Annika is a loving and loyal person with a heart of gold and a determined spirit,” said Randy Larson, her dad. “When she makes up her mind to do something (or not to do something), it’s best to make way and encourage the journey. She is pretty comfortable in her own skin and not afraid to tell you what she thinks or feels … for that I admire her.”

Her mother describes Annika as honest, trustworthy, independent and authentic.

“She’s a nurturer and someone who really cares about others and their feelings,” she said. “She’s also a free spirit who loves to travel and isn’t afraid to travel on her own. She has a cute sense of humor and when she gets on a roll and starts doing impressions … she’s hilarious. She’s taught me to enjoy life more. Our family life is definitely more interesting and fun because of our children.”

Annika said she’s proud to live in a unique city like Waco.

“Waco has a wonderful sense of community, a great downtown area, college district, historic homes and people,” she said. “We really do have a spectacular city because it’s not too big and not too small. Even when you think there’s nothing to do in the city, you’ll find something new.”

When she’s not at school, you might find Annika at her favorite locally-owned, new pizzeria called Moroso or taking in the sights — and the sweets — in downtown Waco. 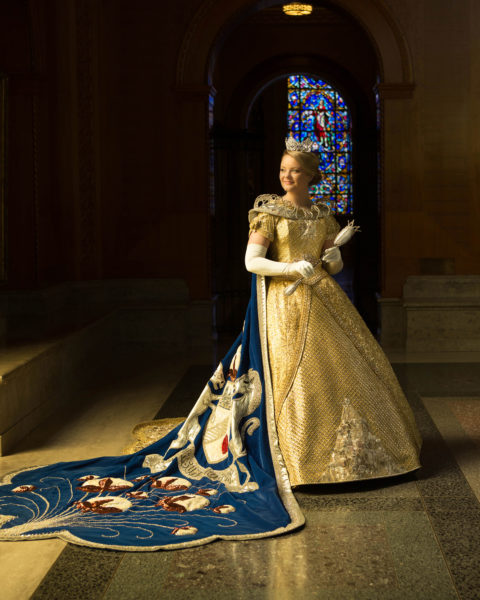 Being Queen to Annika is all about representing the city she loves, meeting new people, keeping the history of Waco Cotton Palace alive and sharing what Waco has to offer during the fun weekend.

“It’s just the perfect way to showcase the best of Waco to those who may not otherwise get to experience what our community has to offer,” she said.

Annika’s Royal Gown is fashioned of gold lamé with diagonal pin tucks that are embellished with stones on the bodice and portions of the skirt. Court Costumes Chairman Jill Goss, who designed the Queen’s gown, said she was inspired by Queen Elizabeth II’s royal coronation gown from 1953. With touches of floral lace embroidery, Annika’s dress is feminine and complemented perfectly by the traditional Waco Cotton Palace regalia that is worn by the queen each year.

“I hope people will see a young lady who shines from the inside-out, who proudly represents her family, her community and this time-honored tradition,” Missy said.

Annika’a mission will be to make the weekend memorable for everyone involved, she said.

“I want to be as welcoming as possible,” she said. “I also want everyone who has worked so hard to make this weekend possible to know how grateful I am for all of their hard work and time they have put into Cotton Palace 2017. I hope that the local Waco residents gain a new perspective about our city and are proud to be a part of it, like I am. And that the out-of-towners remember Waco not only for the city that has places like Magnolia Market, and Baylor University, but also for its welcoming and warm atmosphere and tight-knit community.”