“I will attend this year’s [Grammys] because I do have two nominations.”

Creative Waco commissioned me to do two murals, and one of them was during their opening. They had me do a live painting. So I invited [executive director Fiona Bond] to see some of my work, and she loved it. From there, we just talked a little bit about what it would be like to mentor some of the kids here in Waco.

I love teaching [high school] kids, because that’s the age where they’re going to veer off to do whatever they want to do. Some of them don’t necessarily go into art or anything creative, but at least it teaches them how to implement creativity into whatever they’re pursuing.

And it was therapy for a lot of the kids. They don’t usually come from rich backgrounds. A couple of them told me, ‘This is the best thing I’m gonna do.’ I told them they’re just starting. They have their whole lives ahead of them. But I’m glad this is catapulting them into thinking, ‘Man, I can do a whole lot more than the 8-to-5 thing.’

I’m on a judging committee for the Grammys. And every year I go to [Los Angeles], and I sit with four of my peers. We basically look at every piece of vinyl, every CD that’s submitted. We look at 2,000 [or] 3,000 and then narrow them down to five. And those are the ones that are submitted to the board to have the members vote on [best album package]. 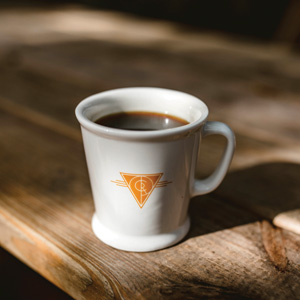 Suarez likes the atmosphere at Pinewood. “All the guys here treat me like family,” he said, including Dylan Washington, one of the owners who greeted Suarez as he was waiting for his coffee. “Plain, black drip coffee, because it has the most caffeine in it,” Suarez explained of his drink of choice.

I’ve been fortunate enough to work with the Grammys for three years now. And I will attend this year’s because I do have two nominations for submissions that I’ve done for independent artists. One just got nominated. One made the final round. It’s Mariachi Divas, from Los Angeles. The lady who runs Mariachi Divas [Cindy Shea], did a lot of the mariachi music for ‘Coco’ the movie. One thing I’ve learned is that if your name’s on the credits [of the album] and it’s nominated, you’re nominated.

What makes KurbSide different is we mix a lot of our Hispanic heritage into our coffee drinks. One of our bestsellers is Dirty Horchata. Horchata is a rice water Mexican drink. We make one that is true to our heritage, but we use less sugar. We use agave, so it’s a little bit healthier. Then we add two shots of espresso into it, and it’s amazing. We sell a lot of those.

We do regular drip and lattes and typical coffee drinks. The only difference is we try to mix a little bit of our Mexican culture into it.

The coffee community in Waco is cool. Everybody helps each other out.

Will Suarez oversees Creative Waco’s ArtPrenticeship, an eight-week summer program in which a group of Waco ISD students get a look at the business side of the arts and then work together to create and paint a mural. Suarez graduated from University High School and attended art school in Austin. He also is an owner of KurbSide Coffee in Union Hall.