“Home is not a place. It’s where you feel known.”

Some of the greatest people I’ve ever known in my life are here [in Waco]. There’s people here I would call family, even maybe even more so than my own blood family. Just an unbelievable community here.

I think that there’s something really special happening here. I always tell people when they ask me why I’m here, [the reason] is I love it.

I think that my specific calling in life is to encourage and build up the men of my generation. I think that there’s a lot of young men here that I can encourage, but specifically at church through my community at Highland Baptist Church, and just different types of groups that are built around Waco through different hobbies — sports or dancing or whatever it is — and then also through my YouTube channel, [The Waco Dude]. 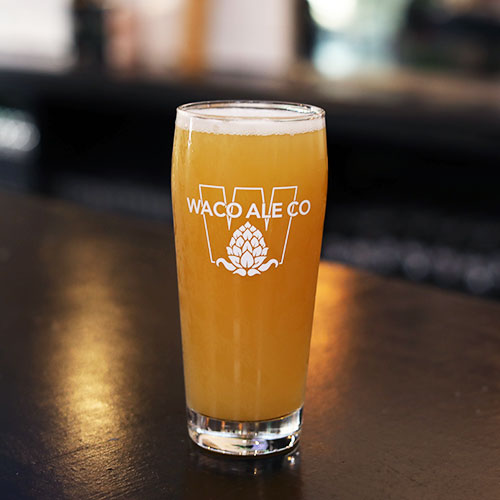 Nacita chose to meet at Waco Ale Co. because “I’ve been wanting to come here for a while. It’s Waco-specific. I’m not a beer connoisseur; I didn’t actually drink beer until after I moved to Germany. I don’t know a lot about beer but always down to try new things. I never want to get stuck doing the same thing over and over again.” After asking what they’re known for, Nacita had a pale ale called Hopburst Orange.

I played [football] in Italy last year with Coach [Art] Briles. It was incredible. Football-wise, it was unbelievable getting to play in that setting with Coach Briles because the last time I had seen him before Italy was on Baylor’s campus.

The last conversation I had with him was I had just gotten released from the football team. He told me that he was sad for me and that I would always be family. But in that context, even in my whole career at Baylor, I talked to Coach Briles five times for maybe 30 seconds. He was so up there, you know, he was the man, the top guy, and he didn’t really talk very much.

But then I go to Italy, and we’re literally riding public transportation to practice together. We’re sitting in a meeting for three hours before practice, and we’re going to church together and going to lunch together. I’m actually getting to know him as a person. That was really, really extraordinary.

Silas Nacita made an impression in Waco and on the Baylor campus as soon as he arrived. His story was the stuff of legend: he had been homeless and once hitchhiked from Waco to his home in California. He attended McLennan Community College and worked full time, hoping to save enough money to attend Baylor. He earned an academic scholarship and walked on to the football team in 2014. In his first game with the Bears, a 45-0 win over SMU, Nacita scored a touchdown with 5:06 left in the fourth quarter. He scored two more touchdowns the next week and became a fan favorite, earning the nickname Salsa Nacho. His football notoriety in Waco was short-lived, however, as he was declared ineligible after it was discovered a friend’s grandfather was paying for his apartment. Even with how his time at Baylor ended, Nacita has decided to make Waco his home. He’s started a production company, Ten31Creative, and uploads video to his YouTube channel, The Waco Dude.