“In life, there are always some bumps, so we just need to be strong and move forward.”

I wasn’t planned to open in the middle of [the pandemic] of course. We got all our plans finalized and everything rolling before the pandemic, and then the pandemic came in place. We were already too far ahead with all the work, and we didn’t have options but opening.

But I see it as a blessing. I always say that in life, there are always some bumps, so we just need to be strong and move forward.

Italian wines are really earthy just because of the vines. They’ve been around for hundreds, if not thousands, of years. So in a glass of wine, you’re going to be able to taste everything that’s around the winery itself, from the soil, if the winery gets breeze from the sea or the river or a lake, how much sun it gets.

There is a lot in a glass of wine to understand. And that’s the beauty of drinking wine. You also have a sip of history, because those vines have been watching everything that has been going on for as long as we can remember.

My wife, [Kristen], she’s from Waco. We met when she was in the Cayman Islands while she was visiting with friends. We started dating, and now it’s been a little over five years that we’ve been married. 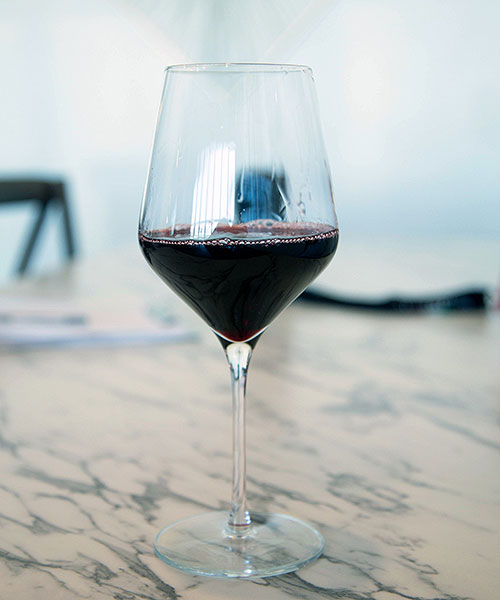 At a table in a private dining room off of the open, airy space of the main dining room at his restaurant, Di Campli chose for his drink a glass of Brunello wine, an Italian varietal made of Sangiovese grapes from the Tuscany region of Italy.

My favorite [tattoo] is the gladiator from Rome, because I’m a big fan of history, which of course includes the Roman history. Also I’m a big fan of Japanese [history]. I always love to read stories about what happened like a thousand years ago and learn from it. It’s on my left arm, close to my heart.

We just purchased a food trailer that will serve as catering kitchen and pop-up [restaurant]. This food trailer is a 24-foot, fully equipped trailer. It’s like a mobile kitchen. We can go and serve up to 500 people with it, and they can order anything that we have on the menu, because it’s going to have a grill in it, a fryer, burners, flat tops. It looks like a kitchen. When I went in it for the first time when it was done, I felt like I was inside our restaurant but I was actually inside of a trailer, and that left me speechless.

Di Campli’s has been open a little over a year and has already gained a loyal following. It was named the top restaurant in three categories — Pasta, Italian and Take a Date — in this year’s Best of Waco voting. Before opening his own place, Massimo Di Campli was general manager and wine director of a restaurant in the Cayman Islands.