“Accessibility is a right, not a privilege.”

In between my first and second years at MCC, my dad had a massive stroke. He needed rehab. I saw the therapist working with him, and I knew from then that I wanted to help people.

I now work with the people who worked with my dad at the hospital at Ascension Providence. And now I do that. I like being able to help people get back to where they want to be, physically and mentally.

[No Limitations offers] flag football and cheer, basketball and soccer, and we do other activities such as an Easter egg hunt so the kids in wheelchairs can participate. We put the Easter eggs on top of tables. It’s hard to get them if they’re on the ground. Then we help with any other organizations that help our kids.

Pediatrics was the last thing I ever thought I would get into in the field of physical therapy. [I thought], ‘It’s just not fair. It’s sad. I don’t want to do that.’ But the Lord just kind of changes your plans up. I got into that aspect of therapy, and then someone brought this No Limitations thing up. So I thought, ‘Let’s try it. Let’s help.’

I just kind of fell in love with it, with the kids and giving the parents and the kids their dreams to do whatever they want to do. 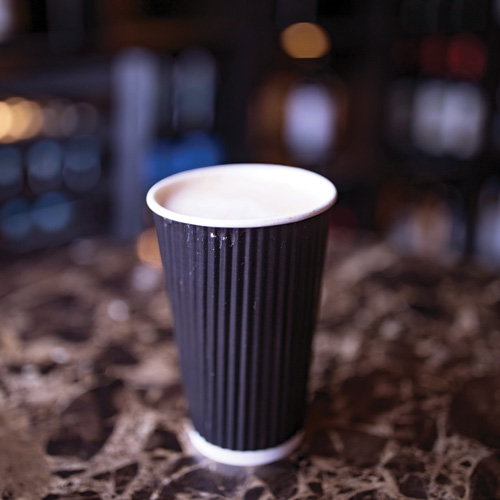 Vicinais ordered a hot chocolate at Alpha Omega, a Mediterranean grill and bakery at 929 Franklin Avenue. She likes the uniqueness of Alpha Omega. “It’s not the same old thing that you can get around here,” she said. “It’s something different.” As for the hot chocolate, she wanted something “sweet and warm” on a chilly afternoon in mid-February.

But being able to give not only the kids opportunity to play these sports but the parents too. Some of our fathers had dreams of coaching their son’s football team. And now we get to give that dad the opportunity to coach their son in that sport.

A lot of me is No Limitations and what we try to do for Waco and for kids to help better their lives here in Waco. The inclusive park, we were an organization pushing for that and getting that on Waco’s agenda. It’s on the agenda to do in the next few years.

Accessibility is a right, not a privilege, and that’s what we try to do with our kids, try to make Waco more accessible and make their lives better. It really is a feeling of just being blessed to be in the same room with these kids because they see the world differently.

They are just so happy even though they’re going through all this struggle — going to therapy two or three times a week, and doctor’s visits and medicine. There’s just so much joy and brightness around them; it puts everything in perspective.

Maria Vicinais likes helping people … obviously. Her full-time job is as a physical therapy assistant at Ascension Providence. She also volunteers her time — a lot of her time — with No Limitations, a local nonprofit that offers opportunities to young people with physical or developmental challenges.
Vicinais grew up in Robinson and attended Robinson schools, where she was a standout softball player. At McLennan Community College, she studied physical therapy and was selected to the North Texas Junior College Athletic Conference all-conference second team as a sophomore. She’s the daughter of Maria Vicinais and Pedro Vicinais, who died in 2011.