“We really need middle-class shoppers to keep the doors open.”

I’m in my fourth year [at Mission Waco]. For about a year I just did development. Then it was sort of a trial period. With the board, we had lots of discussions and interviews.

The succession plan for Jimmy [Dorrell, Mission Waco co-founder and president emeritus] and our board was a slow and long one, and it’s healthy. It’s been extremely good so far. We’re in year five of the transition plan. The first year, we did a big fundraiser called Next 25. I came on board and ran that.

Then the third year, I took on [World Cup Cafe], took over the communication and took on all the events. Then last year, I finally took over the grocery store.

Jimmy is fully retired. He’s president emeritus, but we still meet probably twice a month at the cafe, and I’m talking to him probably once a day on the phone.

I feel like it somehow got communicated that Jubilee Food Market is only for [residents of the neighborhood]. We really need middle-class shoppers to keep the doors open. The average ticket sale is less than $10. 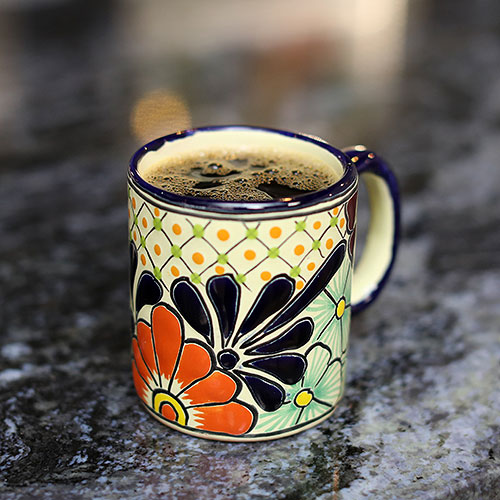 On a bitterly cold afternoon, Calaway chose to meet at Lalo’s Coffee & Pastries, owned by North Waco native Eddy Garcia, across the street from World Cup Cafe. Calaway ordered a Cafe de Olla Latte. “It’s got kind of a sweet vanilla flavor and is just a really dark, strong coffee,” he said.

Our margins are really slim. A family like mine, we’re buying dinners for our family. We can go to Jubilee and spend 100 bucks easily every week, but then I’m also still going to H-E-B to get some of the prepackaged foods that we don’t have here.

We need more people who are willing to do that, who can come in and drop $70 or $80 or $100, because most of the families in our neighborhood aren’t spending that kind of money.

As you can imagine, there’s a reason why small grocery stores don’t exist, right? It’s almost impossible to make money, especially if it is just a random grocery store. People from Woodway are not going to drive over here to shop when they can get everything at H-E-B. So we’ve got to figure out a better way to market to folks outside the neighborhood.

All the research shows that if a middle-class family spends money in a low-income area, and if a lot of people do that, then you would see really low-resource areas now suddenly become more resourced.

John Calaway is the president and executive director of Mission Waco, just the second person to hold those titles since Jimmy and Janet Dorrell began the nonprofit in 1992. One of Calaway’s goals this year is to increase business at the Jubilee Food Market, a Mission-Waco-owned grocery store that opened in 2016.