“Never thought the building would fall. That just didn’t enter my mind.”

I got [to my desk in the South Tower] a little bit earlier than most. Our office didn’t show up till about 9 o’clock, and the first plane went in right before 9. So a lot of my office saw what happened [when they were] outside the building. But I was sitting at my desk getting ready.

That’s when I heard the first explosion. We didn’t know what it was. I had no idea it was a plane. There were windows all around us, and I was in a cubicle. I went over to the windows and looked, and it was a massive hole in the side of the building 30 floors above us, up to the left. You could see something terrible had happened, but we had no idea what it was.

After looking out the windows, we were like, ‘We need to get out of here.’ I started down the stairs with other people, but it was chaos, because a lot of people didn’t know what happened. I got to 44, which is a transfer station, with an express elevator coming up, the local [elevators] coming down. And there are people everywhere, shoulder to shoulder. 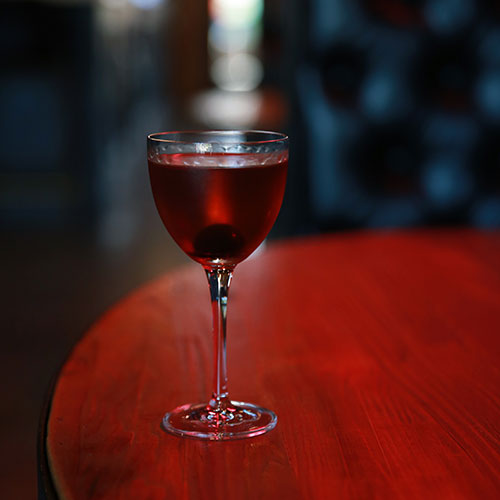 For his chat, Ressetar chose to meet at One Day Bar. “It’s a unique bar,” he said. “It’s a cool environment, and the drinks are good.” His drink of choice, a Manhattan, is “sort of a family tradition. I have a lot of family on the East Coast,” and the drink was supposedly first served at The Manhattan Club on East 26th Street in New York City.

I probably should have continued down the stairs, but they were making announcements that our building was safe. They were trying to get people out of that other building. So I went back to 58, up the elevator, made a quick phone call, grabbed my bag, and that’s when our building was hit. That plane came from the south and turned in at an angle.

We all hit the stairs, and it was just a slow march. We did have lights the whole way down. It was super hot. But you also thought, ‘OK. We’ve got to get out of this because there’s a fire up there.’ Never thought the building would fall. That just didn’t enter my mind.

I saw a lot of things. I saw a lot more blood than you probably saw on the news. Right as I walked out of the World Trade Center and to the street corner, not too far away, there was a huge pool of blood. I know someone got hit by falling debris or something. I was like, I don’t need to be around this. I don’t need to watch. I went to Connecticut for a couple of days and then came back into the city.

We’ve gone back [to New York] a bunch. I’ve taken my kids, and we’ve talked about it. We’ve gone through the memorial. It’s so well done.

It was such a moment. I was fortunate. I was very lucky, but the world changed. Life completely changed.

J.D. Ressetar is an attorney at The Zimmerman Law Firm in Waco. He and his wife, Chelsa — director of advancement at Vanguard College Preparatory School — have three daughters: 9-year-old Ruby, and 13-year-old twins Allison and Brindley. On the morning of September 11, 2001, Ressetar was at his desk in the offices of the DAIS Group, an investment research company, on the 58th floor of the South Tower of the World Trade Center. At 8:46 a.m., a plane crashed into the North Tower. At 9:03, a second plane hit the South Tower, between the 77th and 85th floors.