“It was bigger than we anticipated and a ton of fun.”

E-commerce was kind of sheltered from a lot of the blowback [from COVID-19]. Brick-and-mortars [stores] and the hospitality industry and everything else were experiencing the worst downturn they’d ever had in their existence. And we’ve got so many friends that are head chefs and own restaurants and bars and brick-and-mortar retail stores around Waco and Texas.

We wanted to try to try to help out as much as we could. [Sendero Provisions Co. has] an enormous social media presence and email network, and we’ve got friends all over, bands that we’ve met around the country. We thought, let’s throw a big livestream concert. Everyone’s at home; no one’s doing anything. And then let’s just give all the money back to these friends.

We ended up reaching out to every single band that we knew, Houndmouth, Phillip Phillips, and then it kind of trickled in from there. It just turned into this really cool party.

We decided that all of our sales over that weekend online were gonna go straight back to the businesses, nonprofits and artists. We sold, I think, 2,000 or 3,000 Together for Texas hats and shirts.

So we ended up raising just over $50,000. With taxes and shipping and everything else backed, we cut 42 $700 checks to people around the state. It was bigger than we anticipated and a ton of fun. 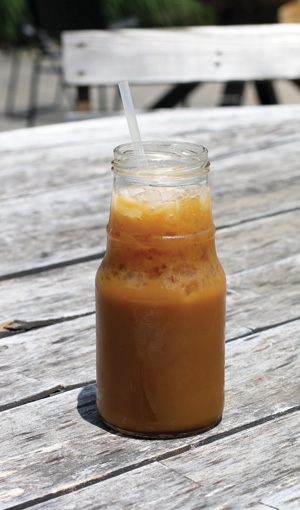 Harlow chose to have a drink at Common Grounds Woodway, because he likes to support local businesses and it’s fairly close to Sendero’s warehouse. On a warm Thursday afternoon, he ordered an iced Cowboy Coffee. “I’ve been so hot lately, maybe preparing for summer,” he said. “I usually drink black coffee, but I was feeling sweet today.”

And all the shirts were made locally here at Hole in the Roof, so they got the full benefit of making the shirts and everything else.

I finished my [Ph.D.] classes in about three years. And I’ve got 1 1/2 papers left. So I could probably finish it quickly if I just bog down and do it.

Ultimately, either I was going to end up in Houston in a research group [in the oil industry] or do production and exploration, or I would do Sendero or something entrepreneurial. I just really don’t like Houston. We’d lived here on and off for 10 years, and we had so many friends.

We were deeply involved in the community and met all these wonderful business owners. We’re good friends with Corey [McEntyre, the executive chef] at Milo [All Day], the Balcones guys, the guys at Brotherwell Brewing, Helberg BBQ, Pinewood, Common Grounds, pretty much everyone.

We really like Waco and didn’t want to leave, and this gave us an opportunity to do that, jumping in with Sendero. So that’s where we plugged in, because we wanted to be Wacoans.

Hunter Harlow is the co-founder and “El Jefe” at Sendero Provisions Co., which sells hats, shirts and other items, all outdoor-themed. Harlow holds degrees in geology from Baylor and the University of Kansas and is close to completing a Ph.D. in geology at Baylor. Harlow and Sendero recently organized and sponsored Together for Texas, a livestreamed concert featuring American Idol winner Phillip Phillips and several Texas-based musicians and bands.