We worked for Parade for many years. They just called and said, ‘Will you photograph Ray Charles?’ And he had a studio in LA, and not a great area of LA. It was a cool space. It was stuck in 1960. That’s when he built it and it was decorated and never changed. — ML

[Ray Charles] was just so gracious, just whatever we wanted to do. So we did all kinds of setups with him playing, singing. He was just super easy-going. Those legend people always are. They’re like the easiest going, the old-timers. — ML

It was the same with George Clooney and Michael Jackson’s producer, Quincy Jones. We were at his mansion in Bel Air, and he was just the easiest-going, nicest, most accommodating guy in the world. — ML 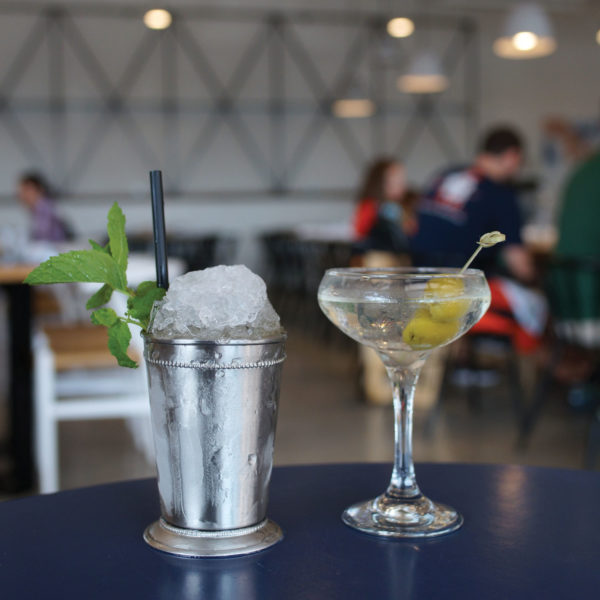 The Drink: Michael and Tracy chose to meet at Milo All Day, at 1020 Franklin Avenue. “I think it really represents the optimism and the future of Waco, of the food scene,” Michael said. “It’s comfortable. The food is fantastic. It’s a visionary chef, and it’s interesting and different food in a sea of Mexican and barbecue.”
Tracy ordered a mint julep. “It is 106 degrees outside, and that looked like the perfect drink. I have great memories of being in New Orleans drinking a mint julep. It just seemed like a refreshing beverage. I’m trying to be Southern and get rid of my California roots,” she said. For Michael, it was a martini, a drink he became familiar with at Musso & Frank, a Los Angeles steakhouse: “We sat down at the bar one Friday afternoon and said, ‘What’s this martini thing about?’” The bartender mixed a martini with Boodles gin, and “we fell in love with it, and it became our favorite drink,” Michael said.

So that was the thing we were worried to leave, [working behind the scenes with those legends]. We made that decision that we would be willing to give that up if we needed to, to provide the kind of childhood we wanted our kids to have. — TT

LA is just a very complicated place to be in the middle. If you’re super rich, it’s great, but working artists, craftspeople, you’ve got to really work at it. Then one of the things that happened is that we started realizing that we were working in New York a lot for clients. We started adding up how many days we actually worked in LA versus New York or other places and realized we could fly out of Dallas or Waco easily. — TT

We were just in Laurel, Mississippi, last week. We were photographing one of the new HGTV couples, the Napiers, [hosts of ‘Home Town’]. It was our third time back there. They’re so great. We really love going there. — ML

The latest thing that happened was one of our longtime clients, the Hallmark Channel, asked us if they could bring a shoot to us here in Waco. We usually fly to them, but they said they were doing a big shoot and could they just come here because they knew we were based here, so that was cool. — TT

Michael Larsen and Tracy Talbert are the husband and wife who make up the photography team Larsen&Talbert. They and their twins, who are now 13, moved from Los Angeles to China Spring about five years ago. Their clients include media outlets such as People magazine, HGTV Magazine and Parade, the Sunday newspaper insert. On an assignment for Parade, they photographed Ray Charles, which is where their conversation with Wacoan writer Kevin Tankersley begins.