“I remember watching him on TV and thinking, ‘That is the coolest dude I’ve ever seen.’”

I got married on October 8, 2011, and my wife asked me if I could sing some Elvis [songs] to her aunt at the reception. During the reception, I changed into a [white suit] and had my brother walk me in like the Memphis Mafia. I sang ‘Teddy Bear’ and one other song, and she just had a ball.

It was that next summer that my wife’s best high school friend was having a family reunion at Westphalia. They asked if I could sing some Elvis. It was very well received. Everybody had a great time. I thought that maybe I could start doing this.

Then I started singing at the Cactus Café in Marlin. Everybody seemed to like it. I had short, spiky hair then and started growing it out longer. I’m dyeing it now.

It’s natural hair, but not natural color. It just kind of snowballed from there. I started getting gigs here and there.

I started ponying up and spending $1,800 on an outfit. Now I’ve got three of the suits. The first one I bought from ProElvisJumpsuits.com was the nailhead spectrum suit. It’s got a lot of trapezoid jewels on it. I have a solid white suit with fringe and a macramé belt. And I bought the eyelet suit, like what Elvis wore at Madison Square Garden. It’s a really sharp suit.

I entered my first competition at the El Ranchito restaurant in Dallas on my birthday, January 30, and I was lucky enough to win it that night. And at a major competition [the E.P. Expo at the Grand Casino Hotel & Resort in Shawnee, Oklahoma], I didn’t quite make the finals. 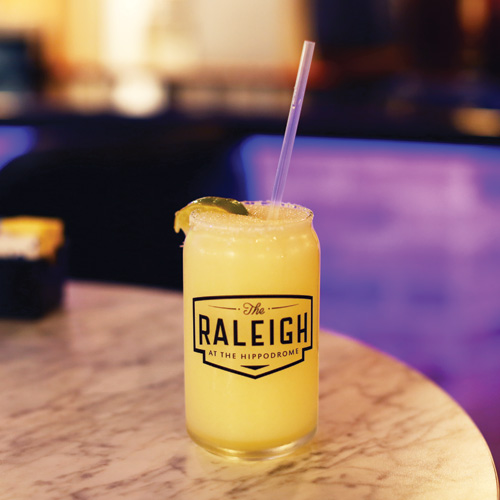 Dressed in an embroidered black shirt from Lansky Bros. in Memphis, where Elvis often shopped, Cobb chose the Hippodrome for its sense of nostalgia. And while he sometimes will have a margarita on the rocks, the frozen version reminds him of childhood Slurpees “with all the ice in it.”

I’ve been a fan of Elvis’ music as far back as I can remember. My dad introduced me to it. He was a musician and played guitar.

This has been such a blessing to me, playing for the nursing homes and places like that. I’ll probably retire [from UPS] in a couple of years, and I would like to do this more on a full-time [basis] before I’m too old and can’t carry the look and will have to stop.

John E. Cobb spends his days driving a truck for UPS, but at night, he puts on a custom-made bejeweled jumpsuit for his second gig, as an Elvis tribute artist. He’s played at several venues in Central Texas, including Kissing Tree Vineyards in Eddy.