“Dreams and ambition are woven within the DNA of a child.”

I graduated No. 9 in my class from [Newton High School], and my dad said, ‘Son, you’re smart. Why do you want to be an officer?’

He always wanted me to be a doctor. So going back to school and getting my doctorate degree, I called him one day after I finished and I said, ‘Dad, see, you can follow your dream. I still became a doctor. Although I’m not the doctor you thought I would be, it’s still a doctor.’

[I have] a passion to help people live a life free of crime. I firmly believe that people are born to do some things in life. As kids, we played cops and robbers — my brother and I and a kid in the neighborhood — and I always wanted to be the cop. But I realized that dreams and ambition are woven within the DNA of a child at an early age. And then you sit that dream somewhere in your mind, and then you pursue it. 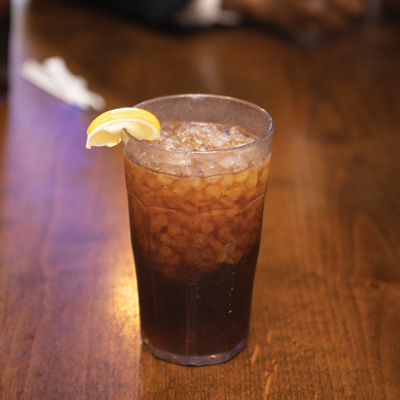 Thomas chose to meet at Heitmiller Steakhouse because “my office is not too far away, and it’s a great place. Great food, great steaks. And it just says ‘Waco.’” He ordered a sweet iced tea. “I love tea,” he said. “And I love caffeine,” which was going to help him get through an early-evening workout back at his office.

We are the investigative branch of the department. Every Ranger has been a highway patrol trooper. You have to come into the department as a Texas Highway Patrol trooper. And you have to have at least eight years of law enforcement experience to become a Texas Ranger. Within the DPS, you have Texas Highway Patrol, which is what most people think of, the black and white [patrol cars], the tan uniforms and the hat, and then we have a criminal investigation division, and then we have Texas Rangers.

So the way Rangers typically get involved in investigations is upon the request of the local agencies that need our assistance because of our expertise, our training, our ability, our resources. They will ask us to come in and assist them in the investigation. What also happens is we are asked by district attorneys and county attorneys and even the attorney general’s office to come in and assist on special investigations that may involve officials, public officials, heads of agencies and things of that nature, conflicts of interest or officer-involved shootings.

I just finished [reading] ‘Extreme Ownership’ by Jocko Willink and Leif Babin, two Navy SEALs. They talk about their experiences overseas and how they brought those experiences back to businesses and leadership.

Lt. James Thomas moved to Waco a year ago upon his promotion to lieutenant in the Texas Rangers. He previously worked in the major gang division in Houston and was assigned to the Gulf Coast Violent Offenders Task Force of the U.S. Marshal’s office. In that position, “we hunt down the most violent offenders in Houston and Harris County and the surrounding area. It’s a very exciting, fast-paced job,” he said. In 2014, Thomas earned his doctorate degree from Lamar University, making him Dr. James Thomas. “I studied adolescent African-American males and the environmental factors that impact their lives,” he said.