“Some of us have been together the whole 7 1/2 years we’ve had the market.”

I moved [to Waco] 10 years ago from Delaware. I worked at World Hunger Relief as an intern. I went to Luther College, in Iowa.

Dave Matthews recorded a live album at my college. That’s its only claim to fame.

I’m a social worker by trade, and I moved to the East Coast to do social work. But my interest has always been food — so the intersection of how we empower people to be part of their food system and local agriculture.

I found the Farm through Google searches. It’s a Christian-based community, so that, along with agricultural and hands-on experience, is what led me there. 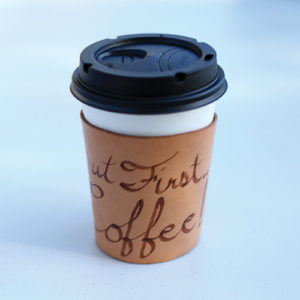 Erickson-Bruce was at the farmers market as vendors were preparing to open at
9 a.m. For her drink, she ordered a pour-over coffee, black, from Third Space Theory Thrst Coffee, a vendor on its very first day at the farmers market. “It’s the perfect way to start off a farmers market day, with a hot cup of coffee, especially on a sunny, brisk day,” she said. “And I’m always excited to try our new vendors.”

Right now, we’re on a two-year timeline [to remain on Washington Avenue]. That’s what the developers said. We’ve made it work.

At this point, it’s just embracing it. We act like we’re never moving back.

We’re making the most out of our situation here. It’s a highly visible location. A lot of farmers markets are around courthouses or city squares. It’s nice to be able to have the landmark of the courthouse and the Alico to point people to a downtown location.

The goal is to be agriculturally focused first. We’re trying to go for people who have fresh produce, chicken, eggs, honey. Then we do have a smattering of body care products, like deodorants and skin care. There are two different soap people. We also have local wine.

Then there’s also a plethora of prepared food vendors, from tamales to pupusas from El Salvador to huaraches. Happy Harvest does hippy tacos. It’s a little bit of everything, and then we even have some prepared beverages, like kombucha.

Bethel Erickson-Bruce is the market manager of the Waco Downtown Farmers Market. She held that position when the market opened November 19, 2011. She left Waco a few years later and moved back in January 2018 after she had her second child. The Waco Downtown Farmers Market is located in a parking lot across Washington Avenue from the McLennan County Courthouse. It formerly had a place adjacent to the Brazos River, just off of University Parks Drive, but was temporarily displaced to make room for a riverfront development, with the promise that the development would again have riverside space for the market.