“I get to tell the stories of these great people.”

I love what I’m doing. For 20 years I worked nightside, and when I realized [my husband and I] were celebrating our 40th anniversary and my 20th anniversary at KXXV, I thought, ‘Yeah, that’s probably enough.’ I fully expected to retire at that point.

I was offered the opportunity to continue doing the afternoon newscast. And then they proposed, almost two years ago, ‘Central Texas Living,’ which is just an absolute dream come true. I get to tell the stories of these great people and what they’re doing.

My husband says I don’t know how to say no. And I need to probably pace myself a little more than I do, but I just love all these different [nonprofit] agencies that have asked me to do things for them. There are some things that I do every year.

I would crawl over broken glass to get to the Baylor Symphony Orchestra’s annual children’s symphony concerts that are sponsored by the Waco Symphony Council. I just love being the narrator for that. I’ve served as narrator for more than 15 years. I did the Midway [ISD] Showcase of Stars.

I’m just honored they ask me to do these things. As long as I can, I’m happy to say yes.

[Not working at night] has been great because we’ve been able to do things like get season tickets to the symphony, which for so many years we hadn’t been able to because they’d have weeknight performances. And I’m getting a little more involved in Waco Civic Theatre. 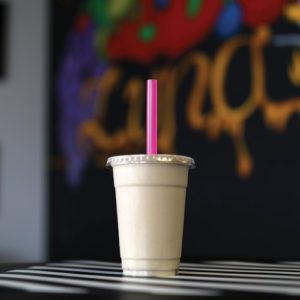 Harder is a fan of Luna Juice Bar at 1516 Austin Avenue because “I love what it stands for,” she said. Harder chose a Pumped-Up Peach Keen smoothie, a mixture of peach, banana, almond milk, agave and vanilla protein. “The smoothies are amazing,” she said. “It just tastes so indulgent. It’s the most wonderful thing.”

In fact, I’m doing ‘Mamma Mia!” I’m just in the chorus. I wanted to sing the music, and it’s been so much fun.

From the day they cast it to opening night is five weeks. I’m kind of floored by that. This kind of intense rehearsal schedule and the dancing part is a real challenge. I’m really stretching myself.

Waco is probably one of the most exciting places to be on the planet right now with what’s happening. I was born in Waco and grew up when downtown was a thing. Then it became not a thing at all, and now people are going to downtown and people are living down there.

There’s a vibrance to the music scene with all the live music venues that are downtown. It’s hard to keep up. And now with even more happening with the Gaineses and their network.

I just think there are going to be notable people and celebrities and all kinds of folks coming through town that we can’t even imagine.

Ann Harder has been a news anchor at KXXV Channel 25 for 23 years. She was on the 6 and 10 o’clock newscasts for 20 years and recently began hosting “Central Texas Living,” where she gets the chance to meet all kinds of folks, like Summer Shine, the owner of Luna Juice Bar. Harder and her husband, Mike, who is retired from Naman, Howell, Smith & Lee law firm, have three sons, two daughters-in-law and three granddaughters.