“I’m trying to help college students have a place to sell because it’s really hard to get exposure.”

The inspiration [for the company] is just California surfing, growing up on the coast, always wanted to be skateboarding, surfing, going to the lake and wakeboarding, just the extreme sport vibe.

I miss surfing, but Waco Surf is like the best thing in Texas because you can surf in Texas without the ocean, which is pretty awesome. That’s part of the reason why I really wanted to collaborate with Waco Surf, because there’s such an awesome place and people from Hawaii and California fly to Waco to go surf.

I’m starting a college student market in Waco at Common Grounds. That’s one way that I’m trying to help college students have a place to sell because it’s really hard to get exposure. I somehow made a break and got out and got exposed. But that’s not the story for everyone.

People are looking for places to sell. That’s a way for me to help highlight the local community of college kids that have businesses or companies or skills that they want to showcase. It’s similar to Eastside Market. I’m calling it Local Trading Post. It’s inspired by the Melrose Trading Post in Los Angeles.

I’m also giving away free T-shirts when I’m at the skate park to people around there or even the homeless people walking by. I just like helping out the Waco community because I like to see it grow.

Fast Times at Ridgemont High is basically like my favorite movie. [Jeff Spicoli, the character played by] Sean Penn is also an inspiration for my company. The long hair, the funny looks, the funny remarks. He just gives off that California Malibu surfer vibe, like the chill vibes. His style in the movie, like the shorts, the checkered Vans, just helps me like, bring a vibe to my company.

I was more in the valley than in Malibu. My friends went to Malibu High. I went to Oaks Christian School, which is in Thousand Oaks. It’s just over the mountain. So there’s still that kind of same vibe. The movie is a little exaggerated, but I’d say Malibu High is pretty similar to that movie. 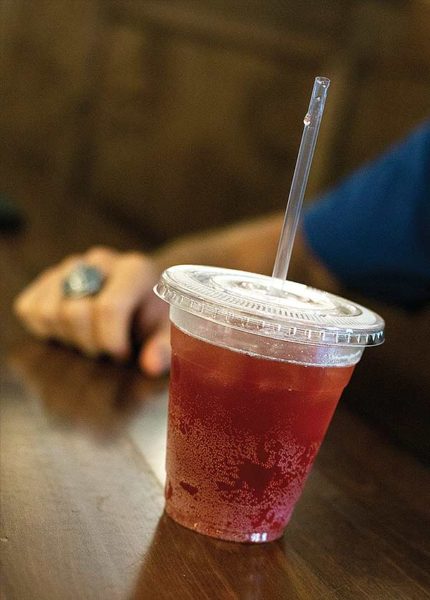 Rettinger is a fan of Pinewood Coffee Bar on Austin Avenue because “I like supporting local,” he said. “It’s just a cool environment.” His order was hibiscus tea. “I’m an ambassador for Yerba Mate, a tea energy drink. And I just like tea over coffee,” he said.”

Dan Rettinger is a senior at Baylor University with majors in entrepreneurship and marketing. He’s from Malibu, California, and he’s started a company called Local Skate Rats, selling surf gear such as shirts, hoodies and the like. He says he’s in Waco for the long haul.