“Leave something better than you found it.”

I don’t know who nominated me. It’s anonymous. You can’t self-nominate, so somebody in the community — and I’m very, very thankful for it — nominated me. We’re waiting to hear back on who the honorees are that they’re going to recognize at the banquet on December 1.

I’m with the chamber, and I’m the chair for the Waco Young Professionals group. We’ve done some really good work. We just wrapped up the Waco executive mentorship program development guide that we’ll be presenting to all the mentors and mentees.

Aside from that, I’m a board member for Inspiración, which is an early childhood program. It’s specifically targeting Latino families and teaching them to be more engaged in the education of their children. I also serve on the school board for Rapoport [Academy] charter school. And I’m on the Plan Commission for the city of Waco. Then I also serve as a member on the Waco Foundation advisory council. 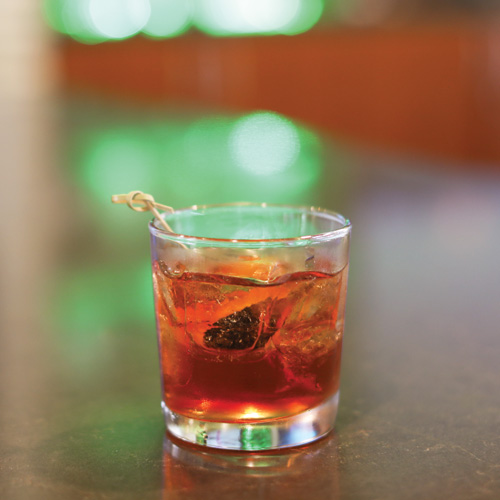 Gomez chose to have a drink at the Baylor Club because “it’s my roots. It’s where I started my professional career” when he was a student at Baylor. He worked his way up into management and supervised other wait staff. He ordered an Old-Fashioned, a drink he tried for the first time at the University of Texas Club in Austin.

It probably stems from my dad. He’s very involved in Beeville. He’s always instilled in me, ‘Leave something better than you found it.’ I’ve seen him do that time and time again, where he’s just made these impacts, and I can’t help but be drawn to doing that.

I also think that there’s not a lot of Hispanic CEOs out there. So when we talk about it from a representation standpoint, I love seeing my dad as a leader. There’s other great Hispanic males within my community who are leaders and so I couldn’t help but see that as the expectation that, OK, if I’m an Hispanic male, then I’m the leader, because I’m seeing a lot of these people that look like me do that.

Sometimes when I talk to some of the high school students back home, it’s like, ‘Yeah, I’ll go do tradesman,’ or, ‘I want to pursue this.’ But nobody ever talks aspirationally about ‘I want to be the head guy,’ or ‘I want to do these awe-inspiring things,’ because maybe within their circle, they haven’t seen that. There’s no representation of people within their immediate circle doing that.

I would really love to be that for somebody to where they can say, ‘Man, I want to be like Benji because he’s in the position that I never thought I would see somebody like me be in.’ I think representation in those higher areas of influence are needed.

Benji Gomez is a franchise systems specialist at Neighborly, the franchise-based company formerly known as Dwyer Group. A native of Beeville, near Corpus Christi, Gomez graduated from Baylor in 2016 with a degree in business. Recently, he was nominated for membership in Waco Under 40, an initiative by the Greater Waco Chamber to “celebrate dynamic young leaders under the age of 40 from McLennan County.”