“We show up, and it’s like we’re Batman with all the crazy stuff that he has.”

[Before becoming an officer] I was a long-term substitute teacher at a high school back home where my parents retired in Wichita Falls. I was doing that in the morning, then from 3 to 5 [p.m.] and on most Saturdays, I was working on airplanes.

I was like a mechanic’s assistant. I would do whatever they needed help with, anything from sweeping the floors to working on really expensive jets.

I’m a pilot, so it was cool to get to see the insides of the things I was flying. 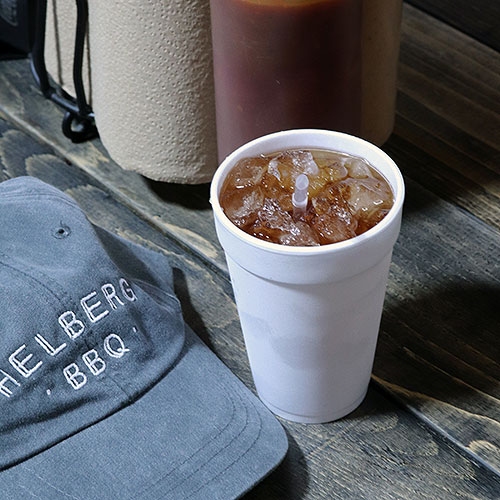 AJ Smith has been a big fan of Helberg Barbecue, even before the restaurant was named one of the 50 best ’cue joints in the state by Texas Monthly. The brisket “melts in your mouth,” he said. For lunch on a recent Saturday, Smith settled for an iced tea. Had it been the dinner hour, he said, it definitely would have been time for a cold beer.

Then they’re just infatuated with the tools on our belt. We show up, and it’s like we’re Batman with all the crazy stuff that he has. It’s really cool to see that glow in their eyes and not have any kind of bias against the police. It’s like, ‘This is crazy. I’ve seen the police, but this one’s talking to me.’

‘Waco PD on the BEAT.’ The BEAT stands for Building relationships, Engaging the community, Actively working to keep you safe, with Teachable moments for all. It is an outlet for me to show people that the overwhelming majority [of police officers are] people like me.

We’re like-minded individuals that got into this because we saw an opportunity to help people. I think that’s where building relationships comes into play, where we’re growing a relationship that we already have in Waco. We’re very fortunate to have a community that supports us.

The plan was [to release episodes] once a month. [Waco PD public information officer Cierra Shipley] was going to do a podcast and put out information on crime stats, and she wanted help. I jumped on board, because I am able to, in this role, and secretly, I saw it as an opportunity to advertise for Crime Stoppers and incorporate that to get more awareness for the program. When I started talking to Cierra, I was like, I really don’t think one episode a month is
enough. We need to do something weekly if we can.

Waco police officer AJ Smith is also the Crime Stoppers coordinator for McLennan County and is one of the hosts — along with Waco PD public information officer Cierra Shipley — of the podcast “Waco PD on the BEAT,” which was created as a way for the public to hear from Waco officers about their jobs and how they ended up in law enforcement.