The word “mentor” has its roots in the ancient Greek epic “The Odyssey,” where a character named Mentor, a loyal and wise old friend of the hero, Odysseus, is appointed caretaker of Odysseus’ home and given charge of the education of his son. Some of the same characteristics embodied by the ancient literary figure of Mentor are evident today in men, women and youth who choose to invest in others: a mentor is trusted; a mentor listens and offers advice; a mentor shares lessons from his or her experiences. The four individuals featured here demonstrate these qualities of mentorship in unique ways and make a powerful argument for why mentors are not only beneficial for but also essential to the educational and professional communities they serve. 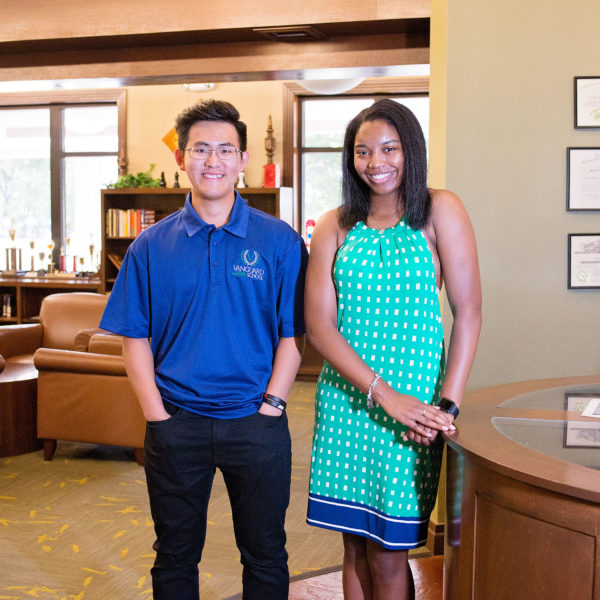 Vanguard senior Kendee Hilliard (right) started Student Ambassadors at her campus, which helps new students like Long Nguyen, (left) a foreign exchange student from Vietnam, get oriented to the school.

Vanguard senior Kendee Hilliard is not only a mentor — she’s a bit of a trailblazer, too.

“I transferred to Vanguard when I was going into the eighth grade. Going to a new school, you feel kind of scared and you don’t want to ask for help, so I knew had to help find a program for people like me who were scared and needed advice from older people,” Hilliard said. “So I went to the administration and said, ‘We need to set up a program for this,’ and they listened to me, and this is our fifth year doing [Student Ambassadors].”

In her junior year Hilliard moved into a leadership role for Student Ambassadors, which she will continue to do as a senior in the fall.

“We help everyone feel welcomed, from the [visiting] sixth graders to the foreign exchange students,” Hilliard said.

Her primary duties are helping the administration set up for prospective student visits, assigning ambassadors and assisting with new student orientation. This past school year she was paired as an ambassador with Long Nguyen, a foreign exchange student from Vietnam.

“When I met Long he was in my English class and we’d talk, and then we started Snapchatting — he’s the funniest dude you’ll ever meet,” Hilliard said. “I expected he’d be timid and closed off and I’d have to bring [him] out of [his shell], but he had to [do that for] me!”

Though the two sometimes run into scheduling conflicts due to sports commitments, they talk often over text message and in between class periods, where they keep up an ongoing friendly competition over grades. Sometimes, Hilliard said, international students will seek out their mentor’s help for English homework, asking questions about grammar and writing flow, but Hilliard is quick to note that the learning is reciprocal. Gatherings between the ambassadors and the international students often feature discussions about or presentations of the traditions, culture and cuisine from the international students’ home countries.

“[Mentoring] has to be a win-win for both [people],” Hilliard said. “You have to put your knowledge into them and get feedback from them while they’re learning from you. That’s the most impactful thing I’ve learned from mentoring. It’s made me be a better leader.” 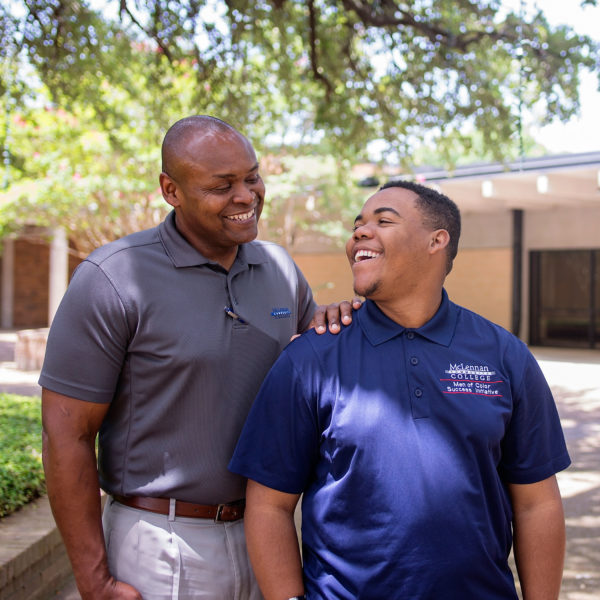 Frank Graves (left) encourages and guides young men of color at MCC to succeed in their higher education goals. Daylon Jackson (right) is a 2015 Waco High graduate who participates in the Men of Color Success Initiative.

For some young men studying at MCC, opportunity knocks in the form of Frank Graves, dean of workforce and public service.

Many of the students Graves mentors through the Men of Color Success Initiative face multiple obstacles to success in college, including disadvantaged socioeconomic backgrounds as well as cultural taboos against asking for help. These are challenges Graves helps students face and overcome — a process that begins with cultivating relationships. MCSI hosts monthly lunches or gatherings for students and mentors.

“The goal is to develop a relationship with the students so they feel comfortable [enough] that they come and ask questions and feel comfortable discussing issues,” Graves said. “[We’re] in a position to guide them toward their goals and offer them encouragement and support.”

Another difficulty many students face, he said, is feeling out of place on a college campus. “They need to hear encouraging words that they can do it. A lot of them come to campus who have maybe not been exposed to that before, and they need to hear that they belong here: you’re where you need to be, you’re supposed to be here. Now let’s assist you in making it work.”

Graves has seen firsthand how the program has impacted some of the men he’s reached out to — not only academically, but also in their careers and personal lives. One student who came in for help with math was also struggling at home and in the workforce. Graves helped the young man enroll in MCC’s adult education and literacy classes and began to see a marked improvement not only in the student’s math skills, but also in his interpersonal communication skills and in his ability to get and hold a job. Another student who participated in MCSI and is now working toward a bachelor’s degree in business was recognized by name in a recent meeting of employers and advisers for his excellent work ethic and his potential for growth within the company where he works.

“That’s what drives me,” Graves said, “to get these young men opportunities to be self-supportive and raise families and be successful.” 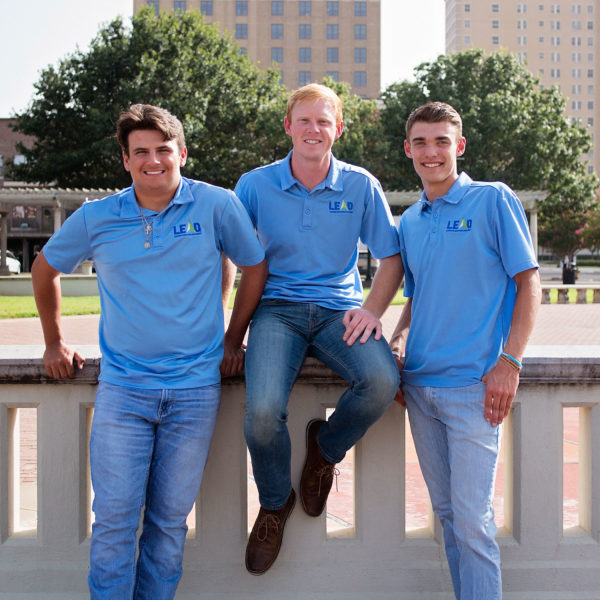 Jordy Barksdale (middle) takes Andrew Acierni (left) and Travis Beauchamp (right) on tours of local businesses to introduce the Waco High students to job fields that are available to them.

“We want our high school students to find jobs here, build their careers here, build their lives and grow their families, and the best way to do that is to show them all the opportunities that are available to them,” she said. The chamber partners with businesses to host industry tours, and Barksdale and his two mentees go on one or two tours each month to help the students determine possible areas of interest.

Most often, Barksdale noted, the mentoring aspect of the program comes not so much during these industry visits but in the smaller moments and conversations that occur between the trips.

“There’s just something really powerful about a shared meal,”

Barksdale said. “We’ll go on the tour and then we’ll go to Chick-fil-A or we’ll go to Whataburger, and that ends up being a huge part of what we do and maybe that’s just an hour or 30 minutes, but that’s significant.”

The novelty of being in a different environment offers the students opportunities to learn and sparks conversations where he can listen and offer advice and support.

“A lot of those opportunities for me to actually have influence as a mentor comes from those moments, those individual conversations about relationships. We talk a ton about sports, we talk about family, we talk about what it looks like to prepare for the next phase of life knowing that you should also be present where you’re at,” he said.

The uniqueness of the mentor role also allows Barksdale to fill a spot in the students’ lives that no one else occupies. 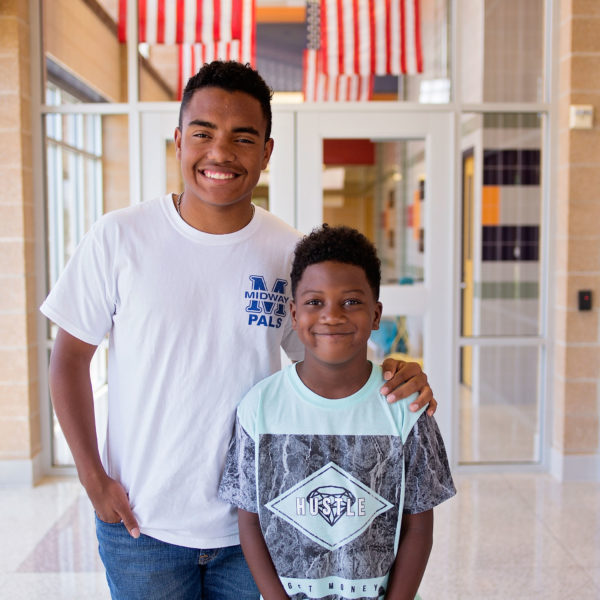 Midway senior Isaiah Watley (right) participates in the PALs program, spending lunch time one day a week with each of his students, including Kei’davion Mangum, a second grader at Castleman Creek Elementary School.

When he was a younger student, Midway High School senior Isaiah Watley saw the positive impact that being mentored by an older student through the PALs (Peer Assistance and Leadership) program had on his peers.

“They would be so excited to see each other every day. They would go play games, and then they would always tell funny stories [about things] they did with their mentors, and I wanted that same connection,” Watley said. So after going through the application and interview process this past year as a junior, Watley mentored three students, meeting with a middle schooler, a fourth grader and a second grader one day each, every week during the school year. He plans to continue being a PAL during his senior year.

“I love this program because I see the impact I have on these kids,”

Watley said. “Some of them have difficult pasts, and for me to be able to help them love school and help them make new friends, and to be the role model or the big brother that they want — it means a lot to me to be able to do that.”

The PALs program is set up as a class period adjacent to a lunch period to allow the PALs time to travel to the younger student’s campus, eat lunch with them and then travel back to their own campus. During this lunch meeting, the two also discuss interests — sports topics figure prominently throughout conversations with all three of his younger students, Watley said — and play games together. Building the relationships is challenging, Watley acknowledged, but worth it when he sees the younger students’ excitement during their meetings each week and, on occasion, outside of school.

“I’m a flag runner at football games, so I run the flags after the team scores touchdowns, and [the second grader I mentor] saw me at one of the games,” Watley said. “He was so excited to see me. He wanted to give me high fives, he wanted to give me a hug. And when I saw his reaction, I knew that I was doing something right.”