In some ways spring of 2020 was marked with upheaval and uncertainty. Yet it also forced us all to slow down and find ways to appreciate time at home. For many, there was suddenly ample time to check off some major tasks on the home improvement to-do list. We talked with six families who completed one (or more) projects at home, whether it was renovating an existing space or creating something entirely new. See how they updated rooms and find out where they got their inspiration. Maybe you’ll even discover the motivation to start your own DIY projects. 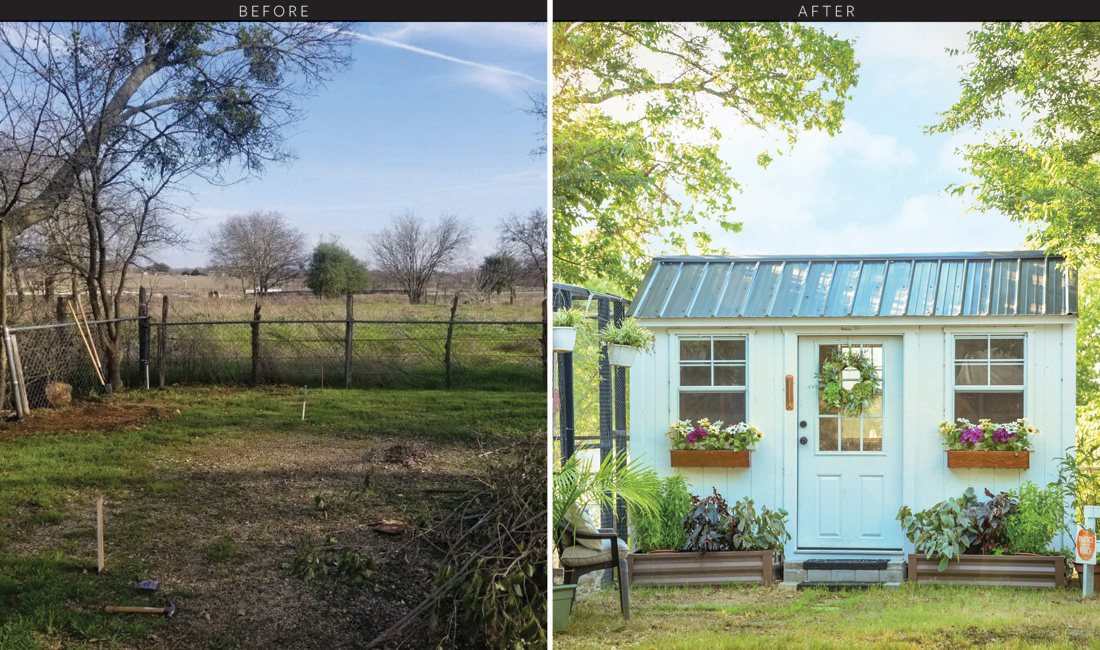 Since they moved to the country, Ragan and P.J. Young knew they wanted to raise animals, but they took time to research before making the first step to get chickens. “I knew if I was gonna do this chicken coop, I was gonna go big or go home,” Ragan said. “We call it the chicken mansion.” The custom building was ordered from Quality Storage Buildings. Then they installed the fencing for the large 20-by-6-foot chicken run before bringing home the baby chicks. Part of “going big” also meant decorations for the chickens. Ragan hung a picture and a mirror inside the chicken coop. “I was gonna put a chandelier in there, and [P.J.] drew the line at that,” she said. 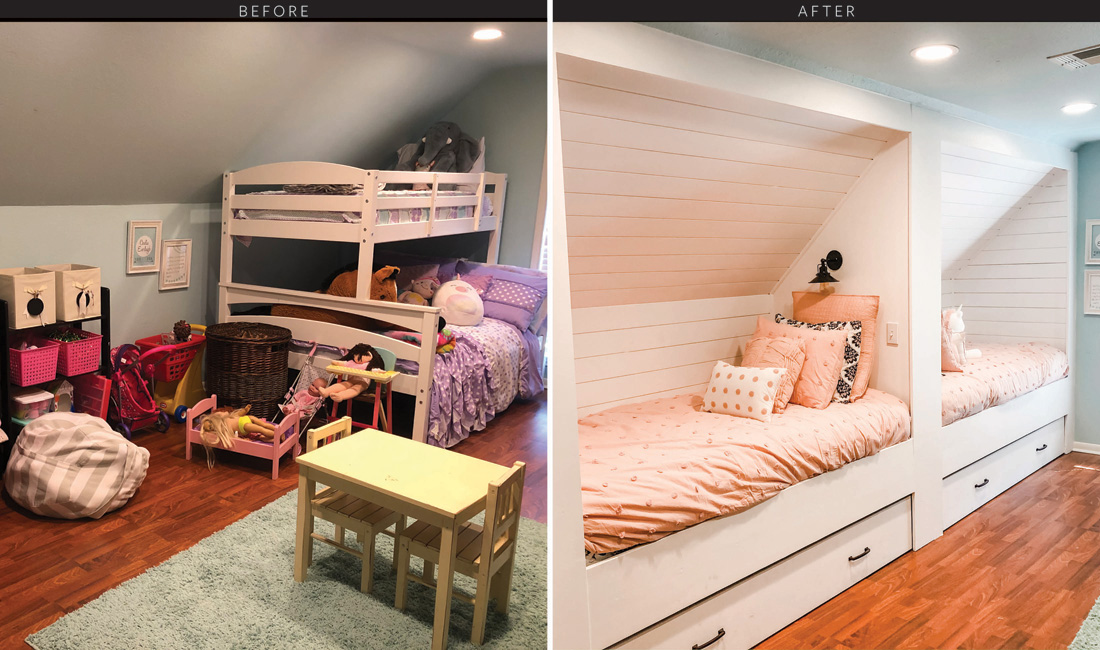 Elizabeth and Brandon Oates decided to tackle their daughters’ shared bedroom for an ambitious project. The room is shared by Clarey, 13, and CeCe, 6. “That’s a pretty big age gap,” Elizabeth said. “We wanted to give [Clarey] a little bit of privacy and a space that was her own within the room.” The pitched ceiling in the room provided a starting point for design, and after searching Pinterest for inspiration, they combined their favorite elements from a few and created their own design. With the help of his friend Jake Thompson, Brandon built the frames and installed electrical for lights and plugs by each bed. The design includes trundle beds underneath. 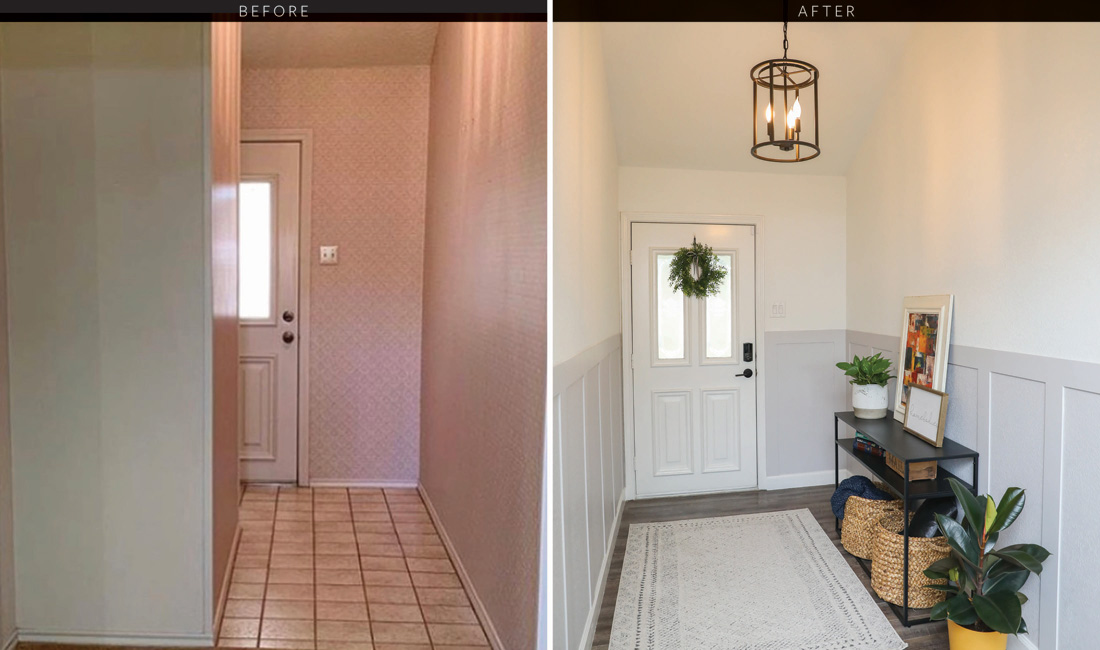 When Cece Lively bought her house, she was immediately faced with a closet. A closet that blocked the entryway, that is. “My realtor literally walked into the wall,” she recalled. The obtrusive barrier served as a second master closet, and Lively knew it needed to go. With sledgehammer in hand, she knocked down the walls, and the space instantly became lighter. After living with plain white walls for a few weeks, she wanted to add something that would draw the focus up toward the arched ceiling. She installed board-and-batten mold on the walls and a new light fixture and ceiling beam. “It was a really simple installation,” she said. “That made a huge difference.” 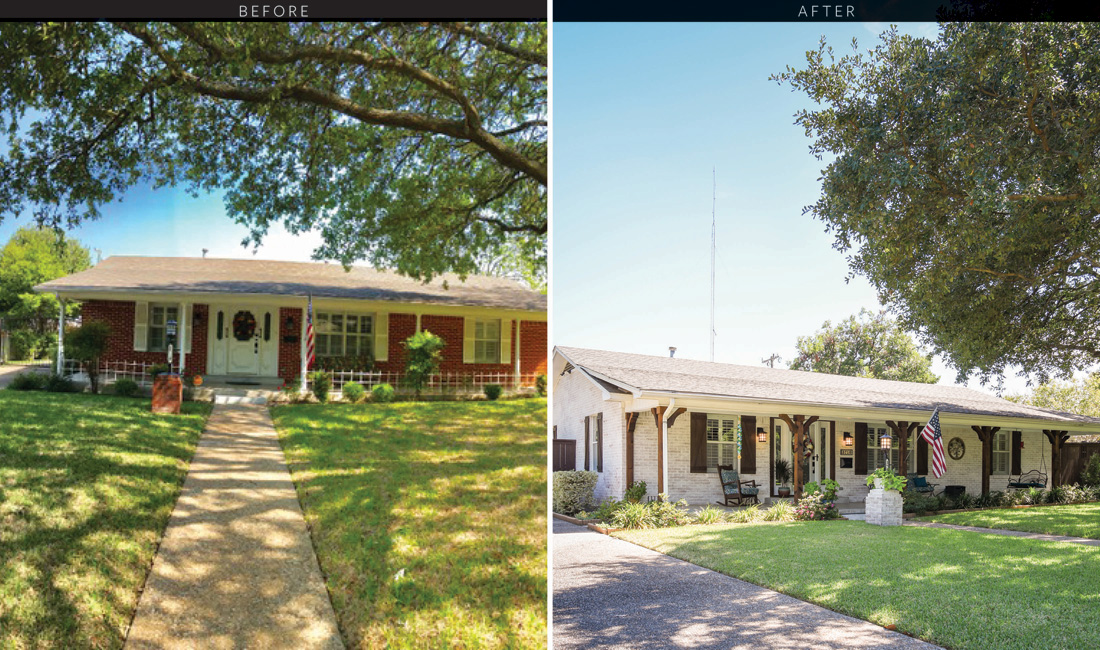 Sherry Thompson-Cornett researched online for nearly a year before she found the right solution for the exterior of her brick home — limewash. She tested it in the back last fall, but then the project stalled. The shelter-in-place orders this spring provided the opportunity she needed to finish it. The process required power-washing the bricks and then applying the limewash. “It gave the house a whole new look,” Thompson-Cornett said. Then she enlisted the help of her son to build shutters, which she stained and added clavos. To replace the white pillars, she hired Miseal Hernandez. Finally she updated her porch furniture and painted the ceiling of her porch blue. 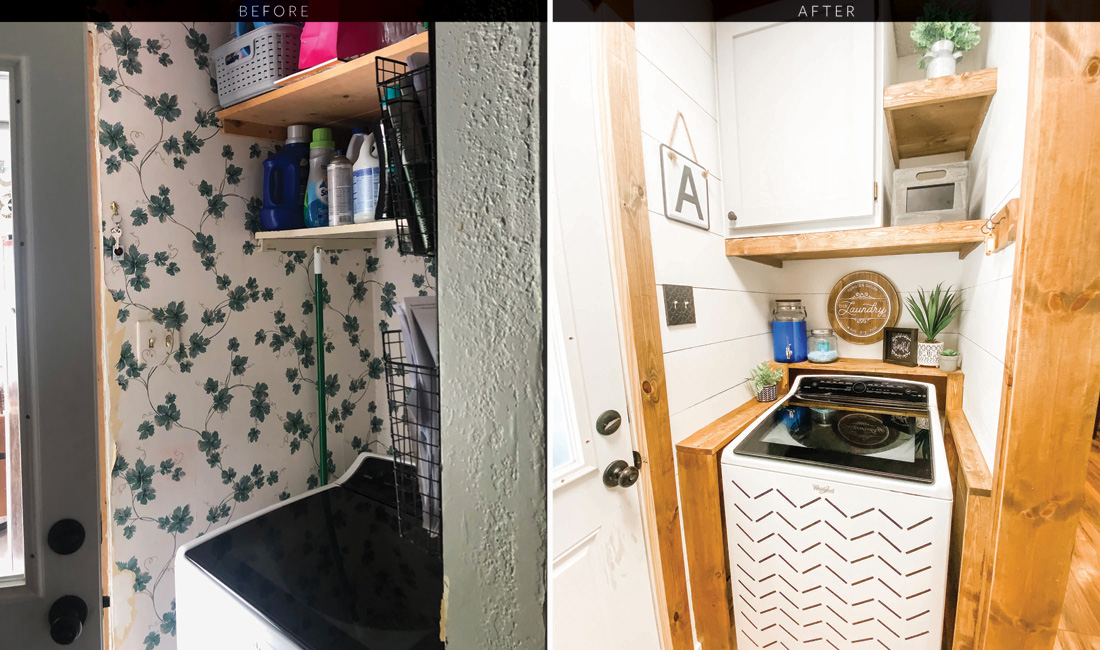 Alisha Alvarez knew she didn’t like her laundry room. The previous homeowners had a “hideous vine wallpaper” that proved to be problematic when she tried removing it. Luckily her best friend, Sarah Ewing, is no stranger to home projects and offered to lend her talent and eye for design to transform the space. They covered the wallpaper with shiplap, then built floating shelves. An old cabinet in Ewing’s house was repainted and repurposed for the laundry room. They also framed out the washer and built a shelf behind it to conceal the connections. “It goes with the flow of the rest of my home. I have the farmhouse style.” Alvarez said. “It was cost efficient as well.” 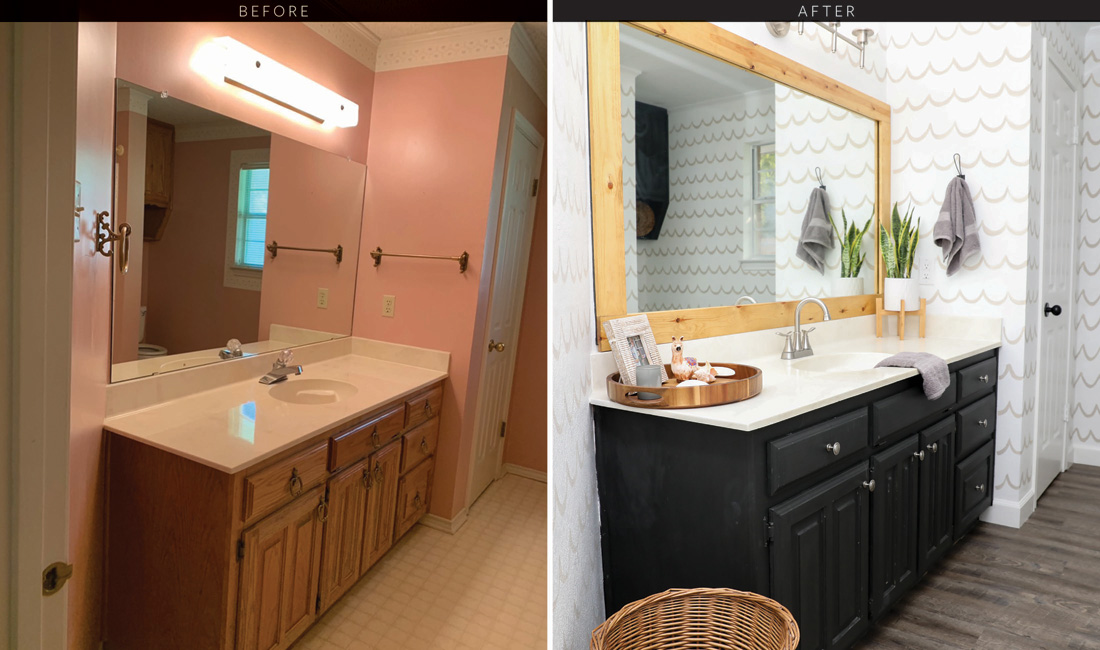 When Cece Lively asked her 12-year-old what she wanted for her bathroom, Teegan had two words — “something whimsical.” Inspired by her Florida roots, Lively hand-painted waves on the walls in Revere Pewter. “I just used a level and some painters tape to make sure that I kept a line all the way through,” she said. “That definitely amped up the space.” All that was left was some fresh paint for the vanity and cabinet. She kept the original builders mirror but framed it with stained wood to match the beach feel. This was one of several projects Lively completed since this spring. “I have a hard time just sitting still,” she said. “I’m definitely a doer.” 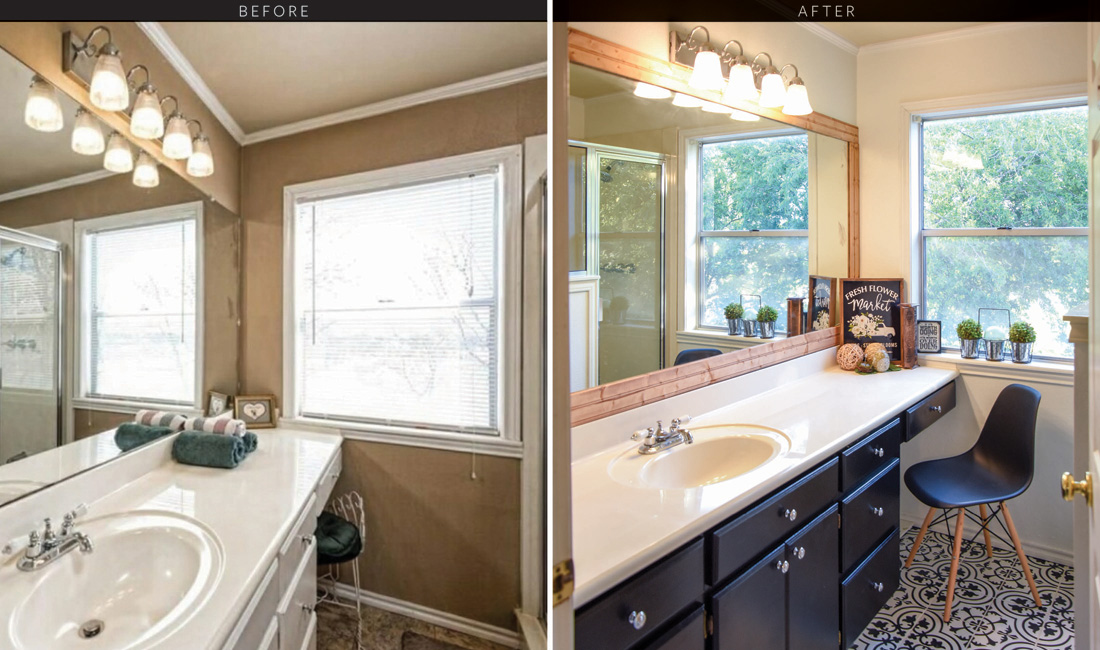 For Ragan and P.J. Young, updating their home wasn’t just a project for them to handle, they wanted to include their kids as well. This spring they tackled their sons’ bathroom. “We involved them in picking what tiles they wanted, what colors they wanted,” Ragan said. And though they didn’t get an all-black bathroom, Jackson, 12, and Wesley, 11, were part of the decision-making process as well as the renovation. “We wanted to teach them how to start doing some home renovation themselves,” Ragan said. “We taught them how to do tiling, painting, how to put new hardware on.” The boys even learned how to install drywall when a water leak caused the Youngs to repair a wall. 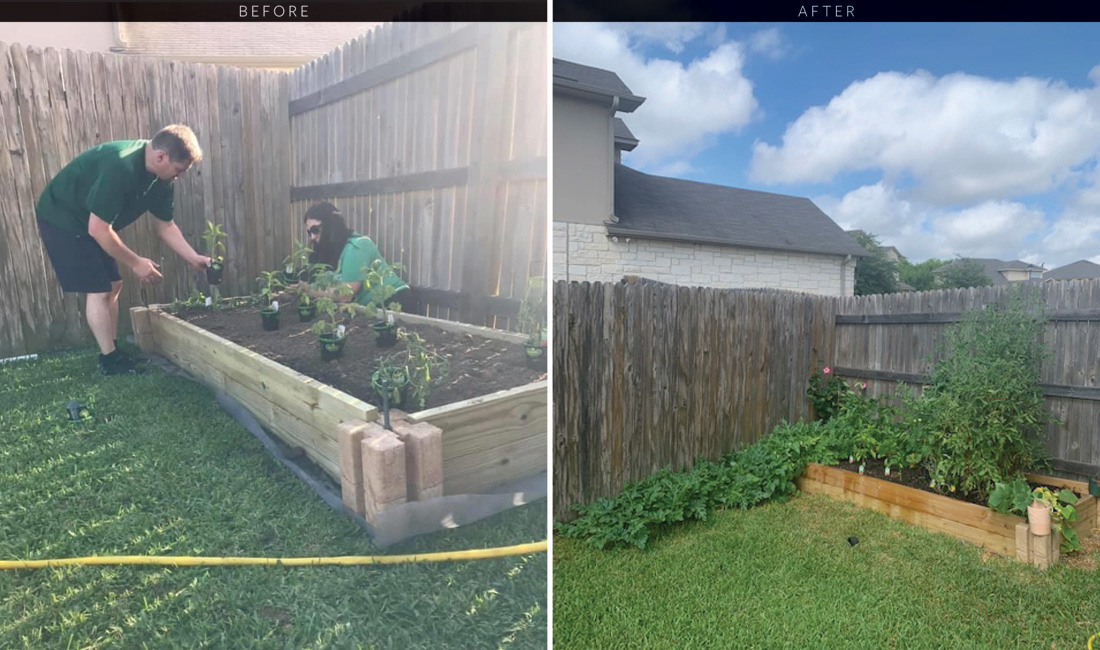 Sarah and Jon Martin had done plenty of talking about planting a garden, for years even. But with the extended time at home this spring, they decided now was the time. To avoid tilling the yard, they built an elevated bed in the backyard. The initial project took only a day to complete, and then it was time to see if they could make anything grow. They planted watermelon, Fresno peppers, bell peppers, tomatoes, cucumbers and spaghetti squash. “We quickly realized we did not have a big enough box,” Sarah said. Her husband added, “The vine ones, the watermelon and the spaghetti squash, are pretty aggressive. We were just shocked that it actually worked.” 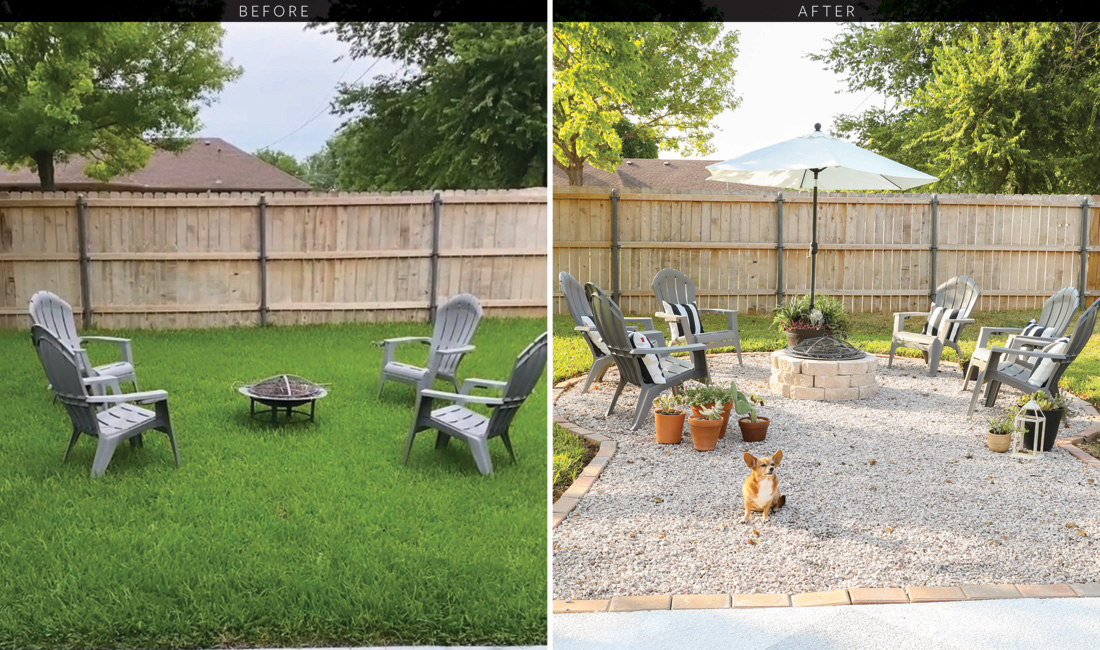 With so many establishments closed in April, many families turned their sights outdoors. Cece Lively envisioned a pool in her dreams, but without a pool budget she found another use for a shady spot in her backyard. “Wouldn’t it be great if we could extend this patio and have people over for margaritas or s’mores or whatever?” she said. After digging up and replanting the grass in another location, Lively utilized paver stones and pea gravel to create a new sitting area in the backyard. She bought some plants from Barrera’s Nursery and created her own umbrella holder to add some extra shade. Now it’s a favorite afternoon spot for her daughter to read or play games. 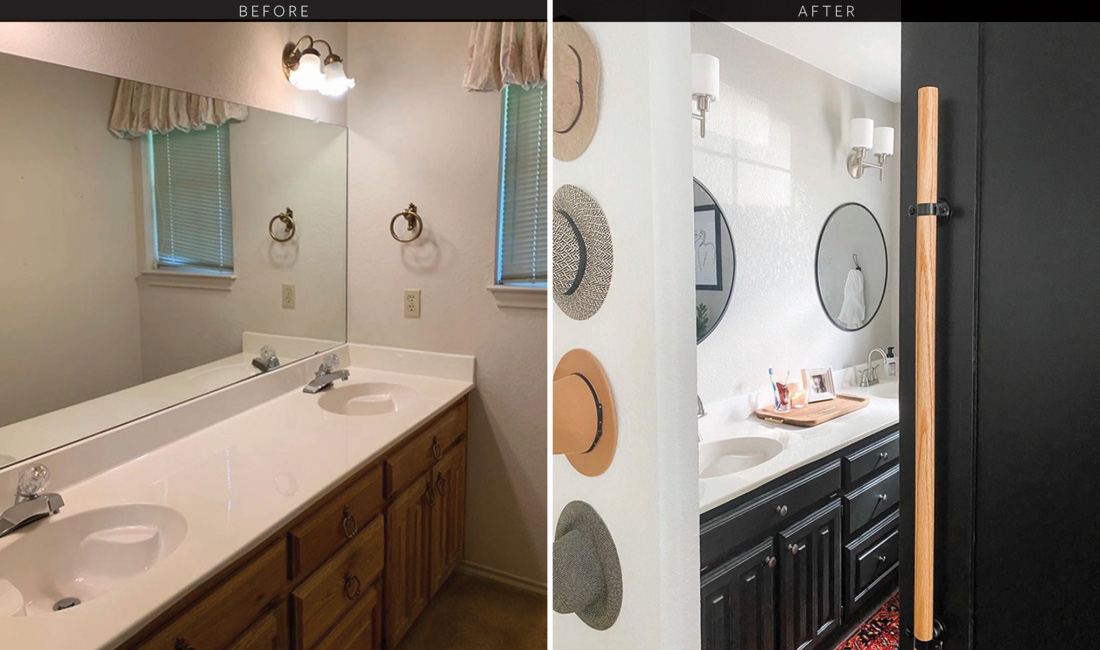 Cece Lively was never taught how to do home renovations, but she’s learned by trial and error. “I’d rather not pay somebody to do something if I can do it myself,” the single mom said. “I’m just not afraid to get in there and figure it out and make it work.” In an effort to update her master bathroom, she knocked down a wall separating the sink from the toilet and shower. Wallpaper came down, new wall texture went up. The vanity was painted, and the large builders mirror was replaced with two trendy round mirrors. Lively said she often gets inspiration at open houses and Parade of Homes: “I can see what some of the builders are doing and what’s selling well.”