Though our city is small, the musicians that it attracts are huge. From rock-and-roll to gospel, alternative to country, artists can’t get enough of Waco crowds.

Josh Abbott Band, for instance, will be back to perform in Central Texas once again this week. The last time they came our way was in 2010 for Westfest, but this year they are back for their very own show at The Backyard.

Josh Abbott Band originated in Lubbock in 2006, quickly attracting the attention of fellow Texans with their extraordinary talent. However, they didn’t become recognized as nationwide country music stars until the release of their second album. “She’s Like Texas.” Certain songs from the album feature renowned country artists such as Kacey Musgraves and Roger Creager.

The band has been touring since its earliest years and has been featured on late night television shows such as “Jimmy Kimmel Live” and “Conan.” Currently, Josh Abbott Band is touring southern states, playing concerts, rodeos and fairs.

What makes this band so adored by fans, both old and new? Their style is a mixture of standard bluegrass and red dirt, yet Josh Abbott Band adds their own character and authenticity to make this unique genre their own. Their classic hits such as “Oh, Tonight” and “She’s Like Texas” are still played on the radio today, while music from their most recent album, “Front Row Seat,” adds some new content to their set list.

“The whole band embraced this project and really committed to not only make it sound incredible but sound different and better,” said lead singer Josh Abbott, regarding the latest album on the band’s official website. “It’s more mature than anything we’ve done in the past.”

More maturity can mean more genuineness. In this album, you hear Abbott become emotional in a few of the slower songs. The band decided not to cut these parts because they want their listeners to hear every emotion and feeling that came with making their music.

“I know there’s going to be a natural reflection on me and how the album mirrors my life,” Abbott elaborated. “But I’d like to think that this is really a story that is so common that everyone relates to it and it’s not just about me. Hopefully people can listen to it and feel like it’s about them.”

It seems that listeners are definitely relating to these emotions. Since “Front Row Seat” was released, several songs from the album have hit peak chart positions, and the band sold 12,800 copies of the album in the first week alone. 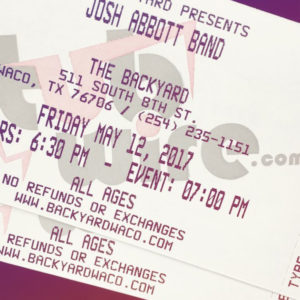 Now, Josh Abbott Band will be making a reappearance in Central Texas after seven years. The band will perform at The Backyard on Friday, May 12 at 7 p.m. Tickets will be sold for $25 in advance or $30 on concert day. There will be an extra $5 upcharge for minors at the door. For more information, visit backyardwaco.com or call 254/235-1151.