Horror, drama, documentary — there’s something for everyone with Waco’s very own Deep in the Heart Film Festival’s 111 films this year.

The festival runs Thursday through Sunday at the Hippodrome as it returns to Waco for the third year since its founding in 2017. Find times and other details in the Shortlist in the digital edition of our April issue at magazine.wacoan.com.

Films span from “Caroline,” the only American short film in the 2018 Cannes Short Film competition and contender on the 2019 Oscars shortlist, to “The Quiet Room,” a psych ward horror.

Deep in The Heart of Waco

Co-directors Louis Hunter and Samuel Thomas said a goal for the 2019 festival was to get more involved within the community and look at how to make industry-related things more accessible for Wacoans. 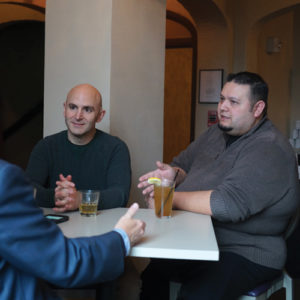 This led to a new idea. Saturday offers hands-on education sessions for attendees. Do you love filming or work with cameras? A Kodak filmmaking master class showcasing the Kodak Super 8 will be put on by Kodak presenter Norwood Cheek. Are you an aspiring actor or want to learn more about how to get scouted? An actors and agents panel was designed just for those questions. Not any of the above, but still want something cool to do Saturday? A tour of Waco film locations will show attendees some of Waco’s best spots.

After parties at Waco Escape Room and Waco Winery allow festival-goers to experience some personal touches of Waco, accompanied by a Brotherwell Brewing bash and a cocktail hour at Cultivate 7twelve.

Another goal for the film festival was to not simply select so-called “artsy-fartsy” films, so audience members don’t have to worry about “getting it.” This makes the festival more welcoming for families and audience members who aren’t the most well-versed in fancy film techniques!

“People get intimidated by the word film festival,” Thomas said. “They feel like it’s high society or something that’s way out there and artsy. It’s not. It is a time to come watch movies and see stories you wouldn’t see anywhere else really. That’s the beauty of it.”

Around 60 filmmakers will be present throughout the weekend, and festival-goers will get the opportunity to ask the filmmakers questions following their films.

“They’re coming to hang out in Waco for the weekend, show their films and meet you,” Hunter said. “That’s the important thing to us — these are super accessible films and you get to meet the people who made them.”

“Minor Injustice” is about a Texas law that charges 17 year olds as adults and follows adolescents’ journeys through the prison system. Hunter said it was filmed in Lubbock, but touches the community here in Waco.

“Let’er Buck” is put on in partnership with the Heart of Texas Fair & Rodeo, as it tells the story of a 100-year-old rodeo in Oregon.

“Tejano” is about a South Texas farmhand who breaks his own arm to smuggle a cast made of cocaine across the Mexican border to get cash to save his sick grandfather.

Thomas’s picks include: “Igniting Hope,” the story of local non-profit Unbound and how artists in the area have done work to contribute to the awareness of human trafficking, “Sonny Vicious,” a visually stunning film with the potential of being developed into a feature film or television show, and “Caroline,” described as a “jaw-dropping” film shown at Cannes in 2018. It was shot in Houston and tells the story of a six-year-old girl and her two siblings as they’re locked in a hot car.

The movies are organized into blocks that center around a theme found in one or two anchor films in a movie mix-tape style. Some examples of the themes include: kid-friendly, no easy answers, second chance, student films, and family dynamic.

This weekend will serve as the world premiere for 13 never-before-seen films, and as a Texas premiere for 39 others.

Ticket packages range from a VIP pass for $100, which includes all film screenings, educational sessions and after parties, to a ticket six-pack for $32, good for any six showings or individual tickets — all available on the festival’s website.

The weekend will culminate with an awards ceremony Sunday morning at the Dr Pepper Museum, where 32 custom-made awards will be handed out.

This festival is a special opportunity for Central Texas to get involved in the world of filmmaking right here in our own backyard. Which film genre are you most excited about seeing?