In recent days with Halloween approaching, I thought it would be a fun idea to make a list of some of the spookier spots in Waco to find out what sort of scary encounters I might happen upon. For a Friday night fright, I put the Dr Pepper Museum’s Paranormal Tour on my list and promptly reserved a spot for my girlfriend and myself for a nice little Halloween date.

I had heard about the museum’s tour before and I’ve even mentioned it in a previous blogpost, but I still wasn’t fully sure of what to expect. The museum’s website promised we would be led through both buildings to investigate paranormal activities, but what did that actually mean? Both of us are skeptics of the paranormal, so we mostly just laughed it off. On the way over, we even made jokes about the ghost of Dr. Alderton, the inventor of Dr Pepper, floating around the halls of the museum and wailing about the inferiority of Pibb Xtra.

But as we parked and stepped out of the car, an uncomfortable silence surrounded us as the final moments of sunset bid farewell and darkness fell over Waco. It’s easy to laugh about ghosts in the light of day, but we were about to head into a museum certified as haunted by paranormal specialists in the dark of night. We tried to squeeze in a few more jokes before we arrived at the gates, but we couldn’t shake the chills running down our spines.

Once we joined the rest of the group, our two tour guides brought us into the lobby of the museum and had us sit down for a quick orientation. They handed out EMF readers to each of us and explained how they work.

EMF stands for “Electromagnetic Field.” Electromagnetic fields are all around us, and our tour guides explained that spirits could influence these fields to be stronger in areas they are haunting. They encouraged us to turn them on and wave them around for the duration of the tour. If they started going off, it might just mean a ghost was following us. 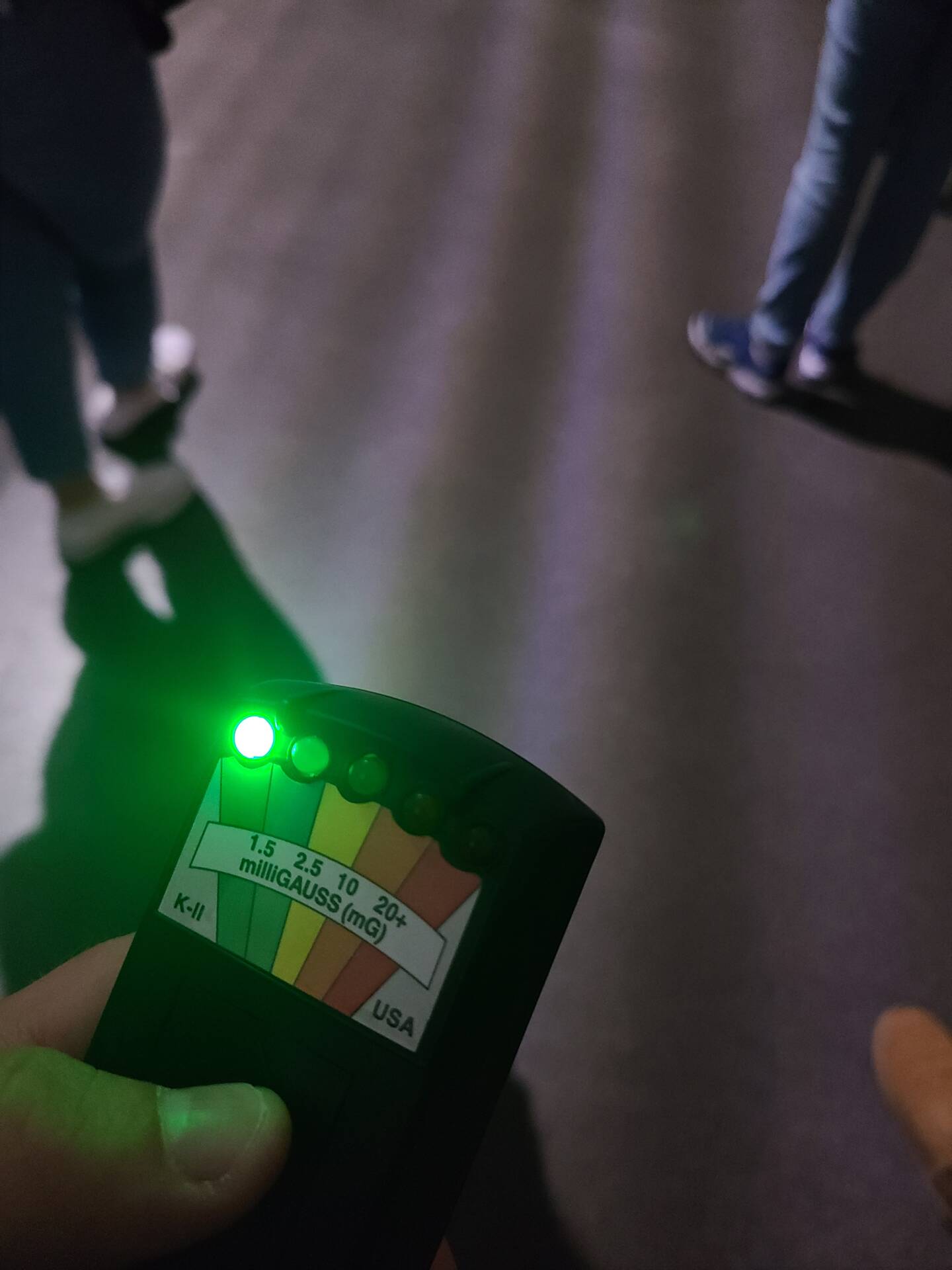 They promptly led us into the neighboring building, where we would begin our tour. Along the way, they told us all sorts of ghost stories their employees have witnessed throughout the years, including one they simply called their “doppelgänger ghost.” This ghost was known for taking on the appearance of employees, and would sometimes be seen on days the employee they were imitating were off work.

After a few more ghost stories and videos of floating orbs, we finally went upstairs and into a nearly pitch-black area we were told was their “most haunted” room. One of our tour guides invited us to sit down with her as she brought out her spirit box, a little radio box that played white noise from AM frequencies. She explained how ghosts would sometimes find ways to speak into these little boxes through different frequencies.

We all sat down, and she turned it on. Immediately, the uncanny static noise of a broken radio filled the room. “I’ve spoken with spirits in here before,” our tour guide said, “is there anyone here now?” At first, it was just the consistent white noise of the radio. But after waiting a bit, the mumbles of a human, male voice came through the speaker. 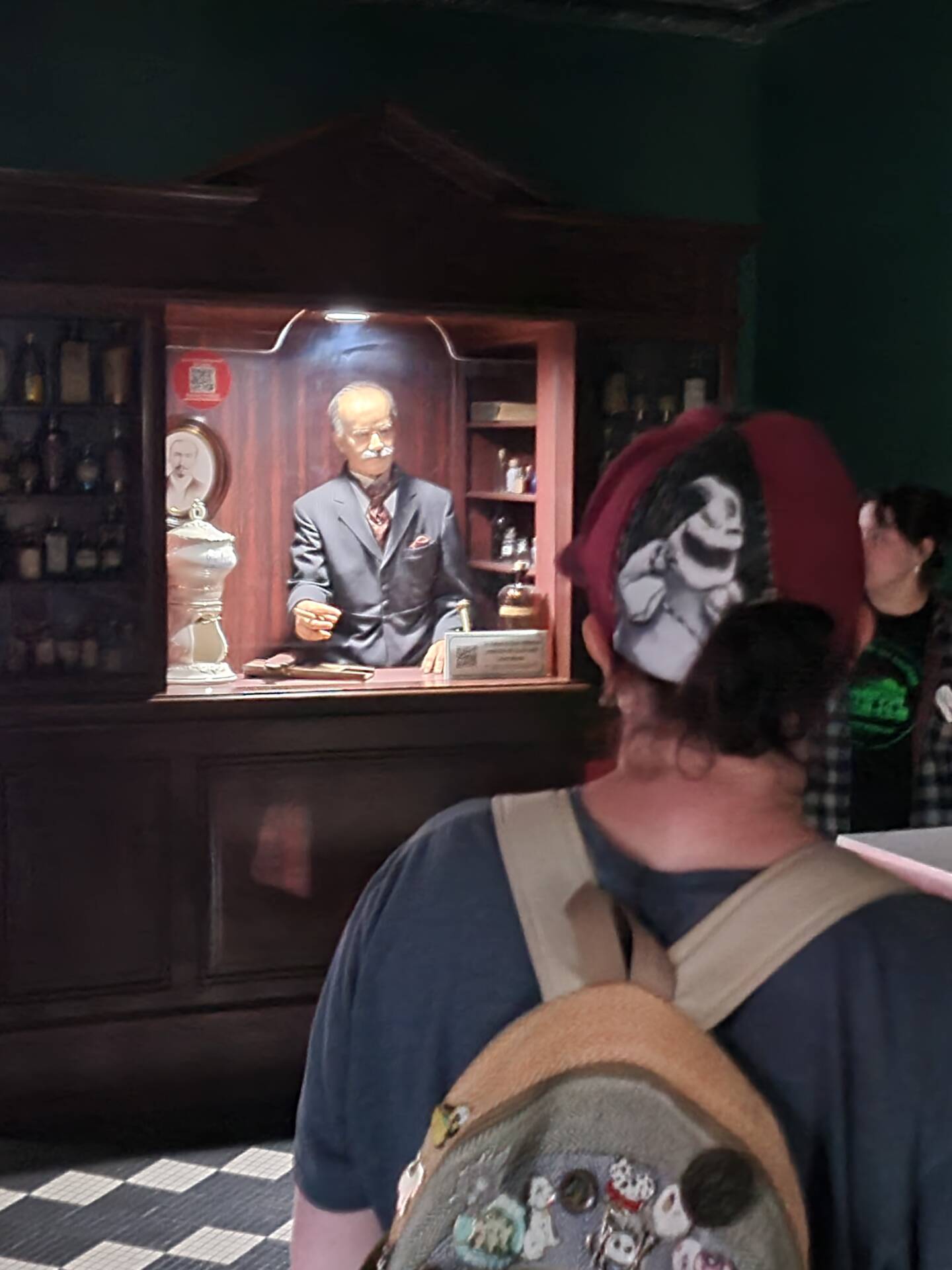 “Can I ask your name?” was the follow-up question. Again, some moments of silence, before another murmur. “I didn’t quite get that, could you repeat it?” our guide asked again.

“Smith,” said the voice in the box. It was a little unclear, but it sounded distinctly like a human voice. My face went pale and I tensed up. That wasn’t the end of the conversation, either. Our tour guide greeted Smith, saying it was nice to talk to him again. Several other questions were asked, including if he was okay talking with us and how he was feeling that night. We didn’t get many responses to those questions, and in truth, it was hard to say anything we heard was a definitive answer, so after a while we said goodbye to Smith and turned off the box, heading to the third floor.

On the third floor, we were told about one of the most active ghosts in the museum. He was a truck driver for the museum when it was still a factory in the 1950s, and during the tragedy of the Waco tornado, he died after being pinned against the factory wall by his truck. Our tour guides told us he was most active on this floor, and said they usually communicated with him via dowsing rods. 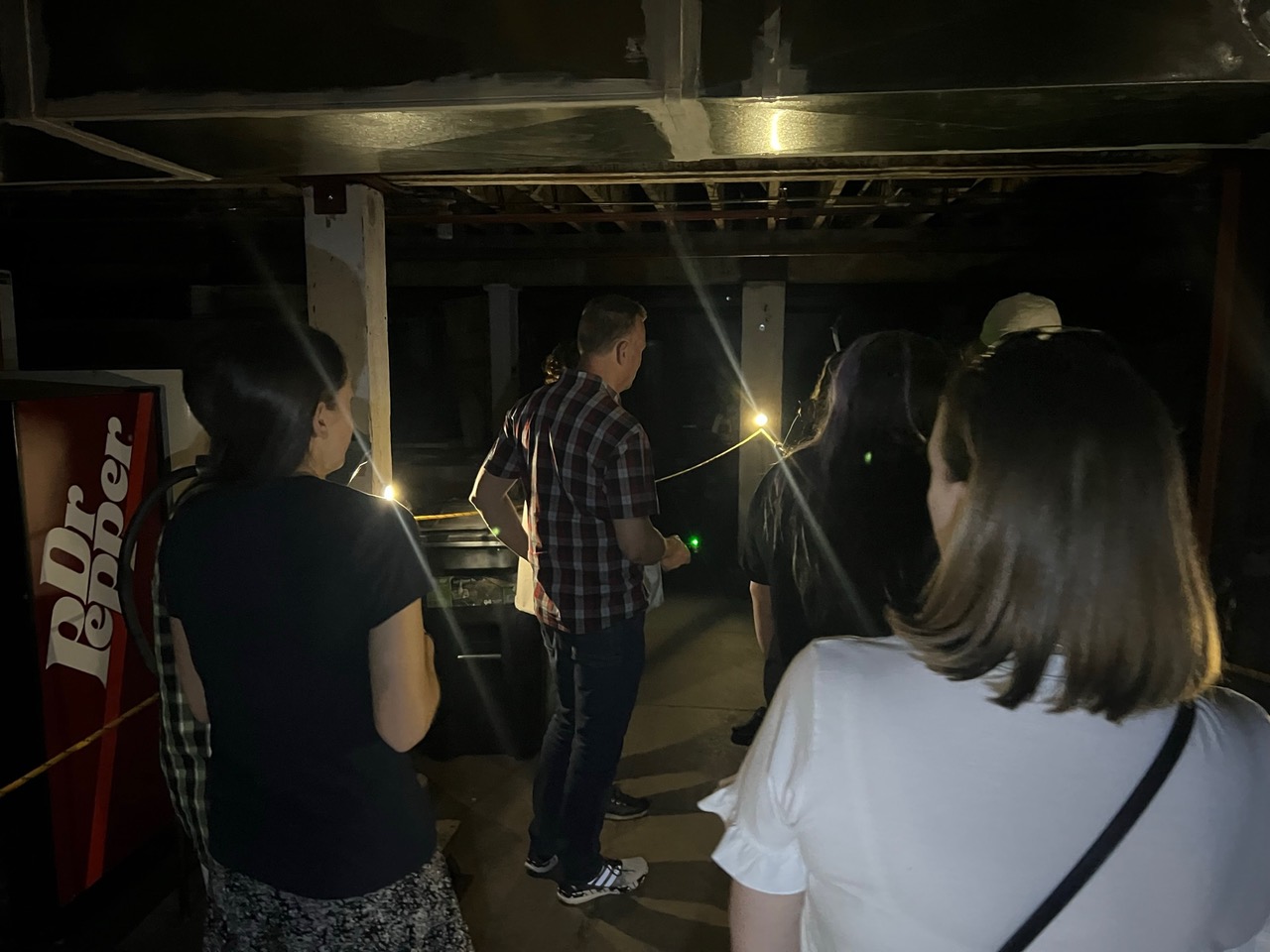 Dowsing rods are a pseudoscience tool traditionally used to find water, but some paranormal experts say they are sensitive enough to be moved by ghosts. Thus, the rods can be held up to ask yes-or-no questions. Our tour guides got out a pair of dowsing rods and explained the rules to us and to any ghosts in the room: for a yes, cross the dowsing rods. For a no, turn them apart. “Is there any spirit in the room with us right now?” one of our tour guides then asked, holding the dowsing rods up.

“Is the spirit I’m speaking with a male?”

The rods pulled apart, so no.

“Do you have a nickname starting with an ‘S’?”

The rods crossed. Another yes.

Shorty was pleasant to talk to. He answered that he was excited to have our company, and told us he was sometimes able to leave the museum to wander Waco. When our tour guide asked him to point to the person in the room who had the best fashion, Shorty was happy to oblige.

At one point during the conversation, my own EMF reader started going off like crazy, so I raised my hand to ask a question myself. “Shorty, is there any other ghosts in this room with us?”

The rods crossed, meaning yes. Our tour guide asked Shorty to point to where the other ghost was standing, and Shorty pointed right in my direction. Apparently, one of the museum ghosts felt comfortable hovering around me.

The most interesting part of the museum came when we were in the vault of the museum and decided to do one last spirit box reading. We all sat down once more, and the tour guide with the spirit box took it out again and flipped it on. “Are there any spirits in here with us right now?” she asked. Almost immediately, we began hearing two voices, both men, one deeper and one higher, and it sounded like they were in conversation. It even sounded like they were arguing. 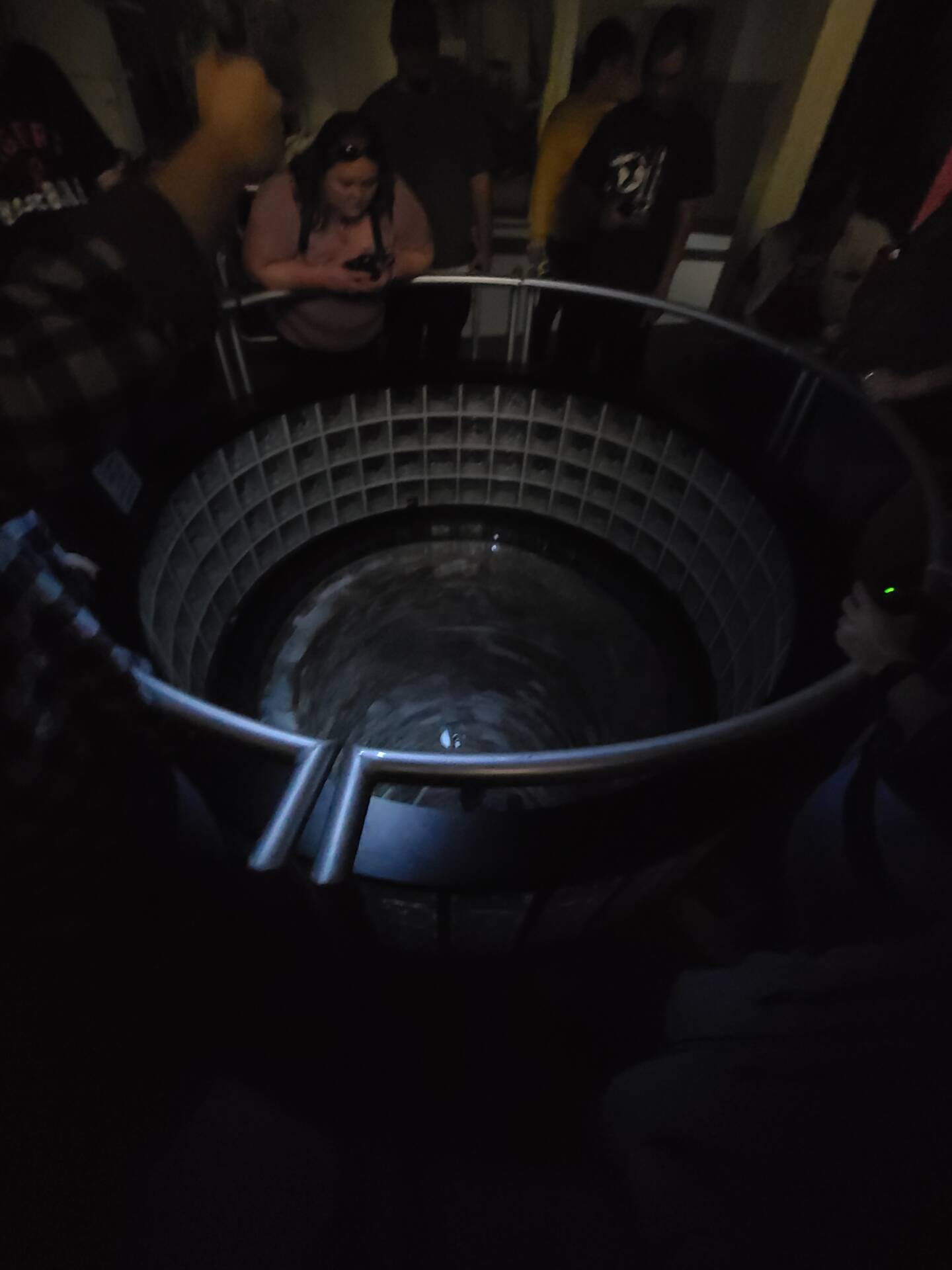 Suddenly, two words came through the box. First, from the deeper voice, we heard “Stop.” Then, immediately after, from the higher voice, we heard “Stay.” Our tour guide told the spirits that she heard both those words, and told the ghosts she wanted to respect their boundaries. “Do you want us to stop?” No answer. “It is okay if we stay?” she followed up.

Then, the clearest voice came out of the radio, as if a man had been standing in the room with us. “It is,” said the higher voice. Once again, chills ran down my spine. The tour guide asked for his name, and once again, the name “Smith” came out of the box. Apparently, our old friend Smith followed us to the safe. After a few more questions with less-clear answers, we bid the Smith and his friend farewell and turned off the box.

At the end of the tour, we went down into the basement, which is normally off-limits to tourists during the day. They told us they weren’t going to do any dowsing rod or spirit box communication down there, as whatever was residing in the basement didn’t enjoy being bothered. I have to say, stepping down into the basement felt somewhat uncomfortable. They warned us it would have an oppressive atmosphere, and though we didn’t see anything out of the ordinary that night, I couldn’t help but feel as though we were being watched the whole time. 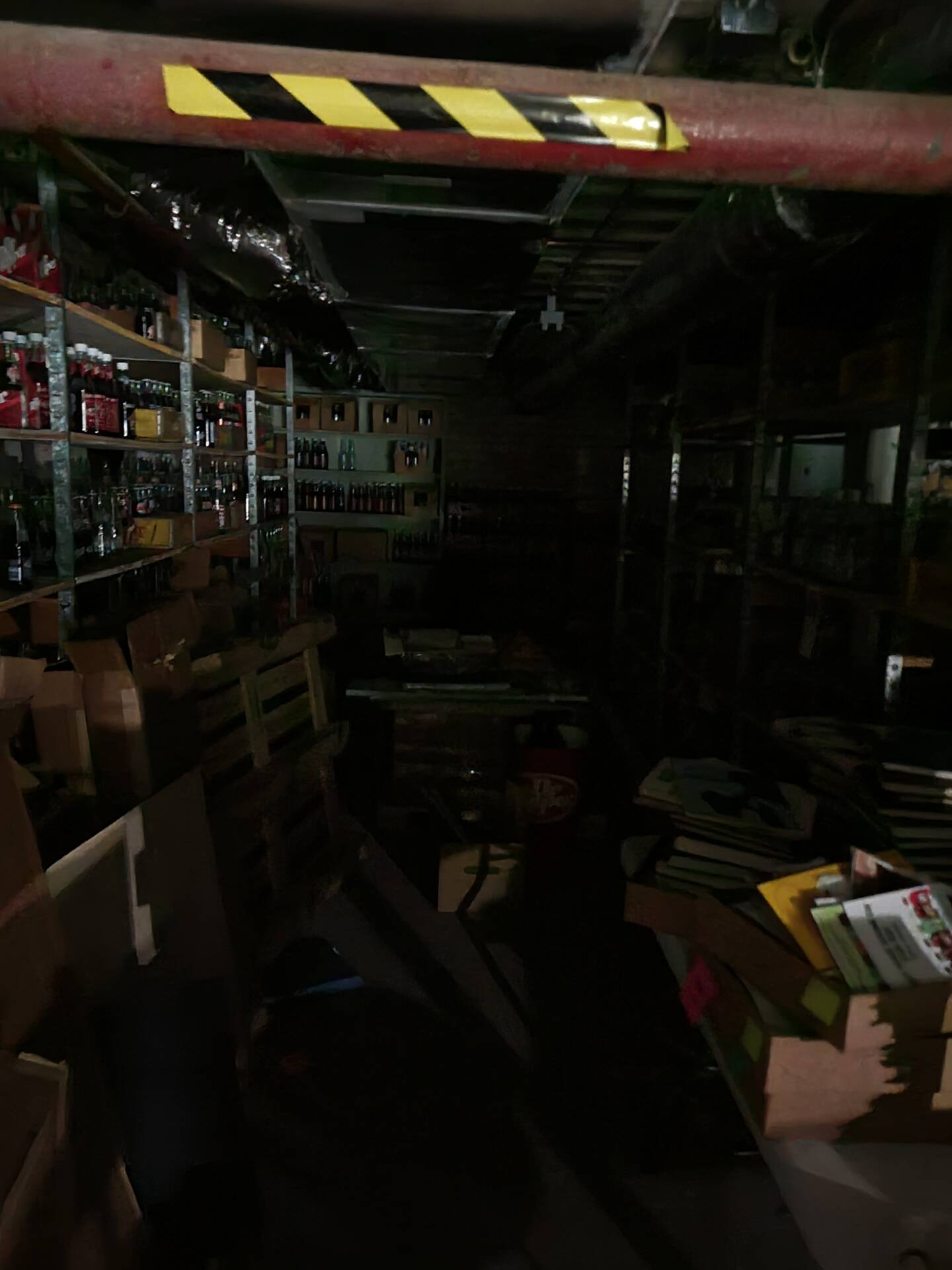 Once the tour was over, we were given a complimentary Dr Pepper and were encouraged to chant in unison, “you are not allowed to follow me home” to the ghosts of the museum. Though I would still say we were skeptical about the experience, it was still a blast to suspend our disbelief for a night and allow ourselves to get into the spirit of the spook with Waco’s very own Dr Pepper Museum.

Though I recounted most of the attractions on the tour, I held off on sharing all the details because I would encourage all who are interested in experiencing it for themselves to reserve a spot today! Not only will you witness some events on the tour that I didn’t write about here, but our tour guides repeatedly assured us that every paranormal tour is unique. Differing interactions with spirits and phenomena are part of what makes each night at the Dr Pepper Museum so special.

While most tours are held during October for Halloween, there are plenty spaced out throughout the year on the weekends. Visit their website to reserve a spot today for just $30 per person! 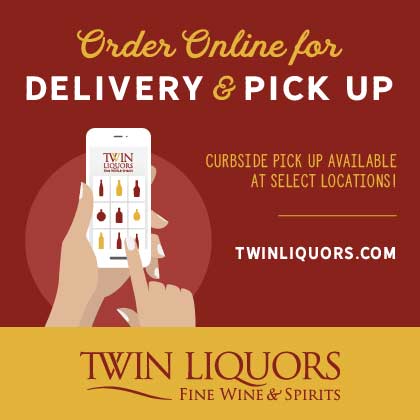 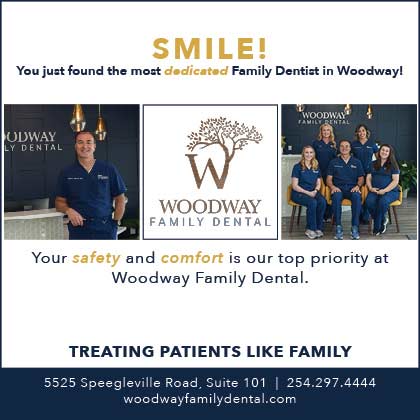