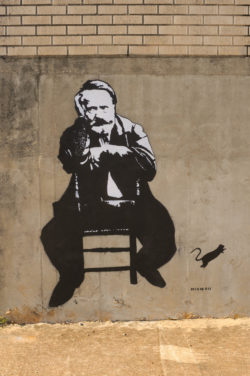 One of the first graffiti artists in Paris, Le Rat is often called the “father of stencil graffiti,” and has even been cited as an early inspiration to Bansky, a fellow street artist whose artwork was also recently featured in Waco at Cultivate 7twelve. Choosing to forgo the tagging or graffiti styles found commonly among American artists, Le Rat first creates a series of stencils before using them to spray-paint a finished image onto his chosen medium, usually the side of a carefully chosen building or a large canvas.

“Xavier [Blek le Rat] is an artist who is inspired by connecting with people and communities,” said Fiona Bond, executive director of Creative Waco. “Although he uses stencils that can be reproduced multiple times, he thinks deeply about each piece and asks lots of questions about the history and people connected with each site. Then he chooses the most appropriate piece for the context, and even if he has used a stencil in another city, he makes each piece unique.”

Last Wednesday afternoon, Le Rat paid homage to fellow Frenchman and world-renowned author Victor Hugo, spray-painting his likeness on the side of Brotherwell Brewing, a local craft beer brewing company that describes itself as a place that “connect[s] great people over great beers.”

Selecting the brewing company as a location was a thoughtful and purposeful choice made by Le Rat. Hugo, author of beloved works such as “Les Misérables,” and “The Hunchback of Notre Dame,” was known for writing about the common man and could often be found drinking and conversing with Parisian commoners at local dive bars despite being a member of high society. During a time when most French novels and artwork were centered around French aristocracy, Hugo’s work highlighting the intense struggles and triumphs of the lower class was a groundbreaking new idea in French literature.

“He was very for the people, he was not bourgeois at all,” Le Rat said of Hugo during a small speech to the growing crowd of bystanders watching him carefully paint his art. “In that way, we are alike.” 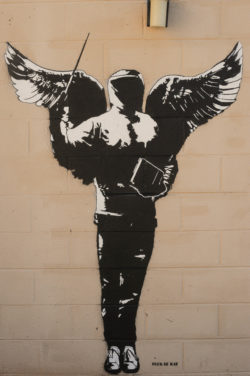 The stencil-graffiti of Hugo is just one example of Le Rat’s work in Waco. One of the first murals he created for Waco last week was a tribute to Kurt Kaiser, a Waco gospel composer and pianist famous in the Christian community for his songs “Oh How He Loves You and Me,” and “Pass It On.” Kaiser, 83, passed away earlier last week. Le Rat’s artwork commemorating him can be found at Apex Coffee Roasters located at 324 South Sixth Street.

“It’s the start of something bigger in Waco,” said Claire Sexton, director of the Art Center of Waco. “There is a small street community here in Waco, but it’s nice to have someone else come here and legitimize their presence in town.”

More of Le Rat’s work can be found throughout Waco. The work at Dichotomy Coffee and Spirits on 508 Austin Avenue depicts Le Rat’s son, a violinist, while the mural at Waco Running Company on 700 Franklin Avenue shows a portrait of Chopin, a famous 19th century composer. At the new building for the Art Center of Waco on 701 South Eighth Street is an illustration of Picasso. 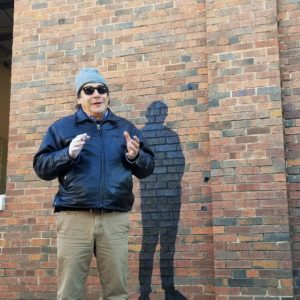 The most unusual artwork Le Rat created for Waco, however, might be the image of a selfie-taking rat — perhaps a reference to Le Rat himself — which can be found in the basement of Cultivate 7twelve. His unusual name is both a reference to an Italian comic called Blek Le Roc and also a comment on the growing rat problem taking place in Paris. Currently, some experts have cited that there are at least two rats for every one person in Paris, placing the city’s rat population at just over four million. Some have also speculated that he chose Rat as an anagram for the word art.

Le Rat concluded his scheduled visit to Waco last Thursday, but his short time here will be immortalized by the artwork he left behind.