Shane Turner’s home is unexpected. On the outside, it’s a lovely but unassuming split-level that was built in 1980. Turner himself is soft-spoken, down-to-earth and a self-proclaimed introvert. But once you walk through the front door, you see a whole different side — of the home and its owner.

Originally from Groesbeck, Turner moved to Waco to attend Baylor University, and he graduated in 2002. Since then, he’s been involved in numerous real estate and development projects throughout Waco and Texas. Turner and his brother, Cody, are partners in Turner Behringer Holdings, a real estate, property management, construction and development firm in Waco.

“I guess mainly what we’ve done is redevelopment downtown. We redeveloped the Waco Hippodrome and other historic buildings,” he said. “We also do ground-up development, shopping centers and apartment complexes, single-family home developments, but I would say our niche is historic projects. That was never our plan, but just like this house — it’s not historic, but it’s old — I like bringing things back to life. That’s kind of what we do in business and in our personal lives as well.” 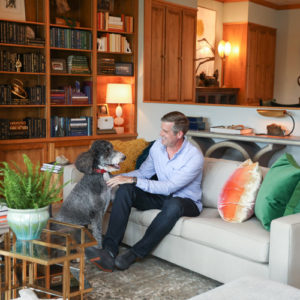 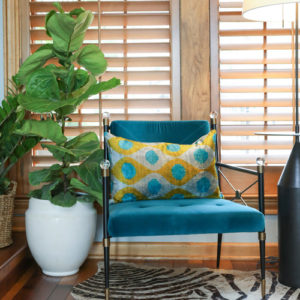 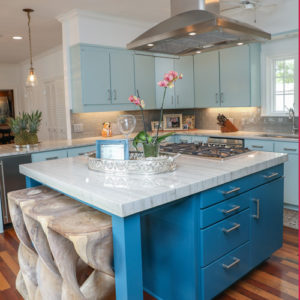 During his time in Waco, Turner said he’s lived roughly 10 different places, and three of them were lofts downtown. While loft-living is easy — “You just lock the door and leave” — Turner said that he was looking to have a yard. He also previously had a home in Stone Creek Ranch, but that turned out to be too far from work.

“Especially with operating businesses like the Hippodrome. If there’s issues at midnight, I don’t want to drive 30 minutes into town and 30 minutes back out there,” he said.

Turner bought his current home four years ago. Located near the transition of Valley Mills Drive to Lake Shore Drive, Turner said it’s just far enough from downtown to feel like he’s in the suburbs but close enough to be convenient for work or popping into H-E-B. It also has extensive views of Lake Waco and a yard for his 3-year-old sheepadoodle, Winston.

Since moving in, Turner said the home has pretty much been a work in progress.

“I started the project the day I bought it,” he said. “It took me about eight months, and then I moved in. Then I’ve done stuff ever since. It was all livable. I just came in and started doing wallpaper in rooms and just adding details and things. I wanted to do a room at a time. Put some thought into it.” 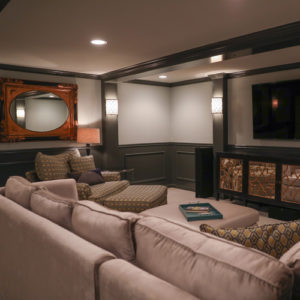 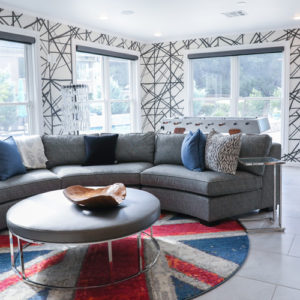 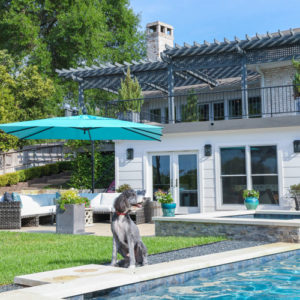 To assist with the styling of the home, Turner enlisted the help of three women: interior designers Crystal Carroll and Lesley Myrick and shop owner Honey Rader. Based out of Dallas, Carroll met Turner about 15 years ago through her former store. Since then, they’ve worked together on business projects as well as Turner’s many residences.

“As a designer, to watch somebody grow through that part of their life, it has been really fun,” Carroll said. “A lot of us don’t have that opportunity. You know this person. You know what they liked last time, and you know that you can push them a little further as time moves on.”

Before moving to Georgia, Myrick had a design firm here in Waco and was a Wacoan columnist. Myrick provided a fresh and unique perspective on Turner’s style. Rader owns Honey’s Home and Style, a home decor shop on Austin Avenue.

“I’ve always shopped with Honey,” Turner said. “She’s kind of a closer. She has cool stuff. She finds unique items that I could find in Dallas or L.A., but she brings them to Waco.”

From the front door, you step into the main living room. The back wall is floor-to-ceiling windows and a set of French doors that open up to a deck looking out at Lake Waco. Just off the living room and back toward the front of the house, a step leads up to the dining room and kitchen.

“It’s a very open design,” Turner said. “When I have a Christmas party, there’s close to 200 people that come. I open these big [patio] doors here so [the space] extends out onto the patio. It’s not crowded. Especially with the different levels. If somebody is up there [in the kitchen] they can see all the way across [to the back patio]. I really like that about it.”

Aside from removing a wall in the kitchen to open up the space, most of Turner’s initial changes were cosmetic. He replaced the kitchen countertops, painted the existing cabinets and added all new appliances. New hardwood floors were installed throughout.

“The house was designed pretty well, but it had not been touched since 1980,” he said. “The house was 100% wallpaper. The cabinets were red. There was big, thick tile. There was some red carpet in the living areas. Very ’80s.”

While Turner still has a few plans in mind for the main living area, like replacing a pair of existing bifold doors with something custom, the majority of the vintage aesthetic has been swept away. In its place is something more transitional and eclectic.

“He wants things that are interesting. He definitely doesn’t want to do what everybody else is doing,” Carroll said. “But his style, it’s transitional. There are some traditional elements, some things that are important to him that move from home to home, but then he also wants to do something modern, or in some ways, just wild. This house is probably who he really is.” 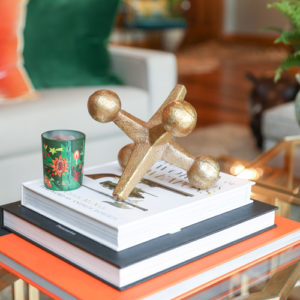 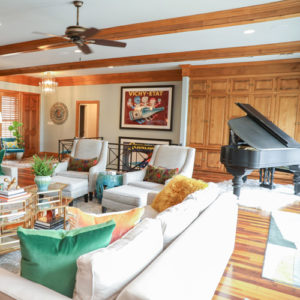 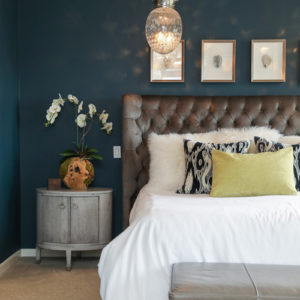 All over the house, you’ll find interesting accents, original works of art, photographs from Turner’s travels and meaningful family treasures. A Steinway grand piano from 1898 sits in the corner of the living area. Turner doesn’t play, but his grandparents were gospel singers that recorded albums, and his grandmother was a concert pianist and organist. The piano, which Turner bought from the family that originally had it built, is a reminder of his musical roots. A radio from 1931 sits in another corner, and in the stairway hangs two large vintage billboards from France that were initially bought for one of his lofts.

“I like to entertain, but I’m also an introvert, so I like something there to spark a conversation,” Turner said. “There’s just stuff I own, just little things that are nothing special other than they have a story behind them. My brother calls my house a museum because there’s a bunch of little stuff, but I think it’s still comfortable. I want people to pick stuff up and ask questions about it.”

While you can’t pick it up, one thing that is certain to create conversation is the wallpaper in the dining room. It’s not on the walls though. A daring pattern of black-and-gold koi fish swims across the ceiling.

“I was really focused on providing comfort and an entertainment space, and Shane wanted to shake it up,” Carroll said. “One of the things [Myrick] provided, the really wild wallpaper probably pushed Shane outside of his comfort zone. Because I’ve been working with him so long, I probably wasn’t prepared to push him that far out of his comfort zone, but the wallpaper really shook up the space and made a difference. It was thrilling to see what somebody else would recommend, and it worked out great.”

Also on the main floor are a spare bedroom and guest bathroom that Turner still has on his project list as well as the laundry room and master suite, which have already been remodeled. Situated at the back of the home, the master bedroom has an incredible view. However, when it’s summertime, you see more trees than lake, but Turner doesn’t seem to mind.

“I feel like I’m in a treehouse in here,” he said. “It’s split-level so we’re up here in the treetops.” In the winter, when the leaves have fallen, he has an unobstructed view of the lake.

Turner said the room itself is very much his style, a clean look with lots of grays and blues and one of his bedroom must-haves, carpet.

“I’m one of the weird people that actually does like carpet in the bedroom. I want to step on a warm surface in the morning,” he said.

From Plumlee Place in Robinson, useful blackout curtains frame the room’s multiple windows and patio doors. Large pendant lights hang over the king-size bed and stand in for bedside lamps. A retro yellow chaise lounge gives the space a pop of color.

In the master bathroom, Turner updated the wallpaper, flooring and countertops but left the original faucets that he thought were cool and unique. He expanded the shower, adding new tile, a rainwater showerhead and a window feature. He also swapped out an outdated jacuzzi tub for a more modern freestanding one.

“I have never used the bathtub. Actually, I’ve actually used it twice for my dog,” he said.

Back in the living room is a stairway down to the lower level. It’s underground at the front part of the house and aboveground at the back. This bottom floor has a theater room, another guest room that shares a jack-and-jill bathroom with his home gym, and a game room.

Formerly a storage room, the theater room is typically only used when he has guests over. The hallway walls down here are covered with art sourced from Rare Performance Memorabilia, a Waco art gallery that specializes in music and movie memorabilia. His grandparents’ records and album covers are also featured.

One room that was not part of the original home is the game room. It used to be a carport, but when Turner decided to add a pool to the backyard, he realized he also wanted a kitchen nearby. The game room has a seating area and TV, a foosball table, a kitchenette with a microwave, sink and full-size refrigerator and a half-bath. The sink backsplash and one of the bathroom walls is a beveled, matte black, mirrored-glass subway tile. Black-and-white striped transitional shades allow the option for light to filter through or be blocked completely. The room’s wallpaper is a bold, black-and-white print of graphic and abstract lines. While it might seem like a cool adult hangout, it’s actually Turner’s nieces and nephew who use it the most.

“They come over to swim all the time. They pretty much take over this floor,” Turner said. “I usually set up stuff, TV and games, and they just stay down here and make a mess.”

With the addition of the game room, Turner estimates his home to be about 5,300 square feet. While he might not use every room every day, he wouldn’t want to live anywhere smaller. Besides his brother, Turner’s mother, a sister, an aunt and uncle and a cousin now live in Waco, so he frequently has people over at his house, and he typically hosts his extended family for holidays.

“It’s obviously a big house for one person, but the way that it’s set up, I can shut down parts of it,” he said. “When I need this much space, I use it. When I don’t need it, then I don’t use it. My dog uses all of it.”