Abby and Kevin Tankersley are native Texans — and proud of it. Abby grew up in Bryan, and Kevin is from Waco. The couple met here and later married here in 1996. In 2000, they moved to Arkansas, and Kevin earned his master’s while working at the University of Arkansas at Little Rock, and Abby taught elementary school. But the Tankersleys were determined get back to Texas to be closer to family. Just in time for their daughter Sophie’s first birthday, they moved back to Waco in 2005.

Kevin is a senior lecturer in the department of journalism, public relations and new media at Baylor University as well as a freelance journalist for several publications. Abby is a freelance chef. Together, they write the Wacoan’s monthly Food & Drink column.

“When we bought this house, we thought, ‘We’re not going to stay here,’” Abby said. But the house was zoned for the elementary school they wanted — Woodway Elementary School — and the Tankerlseys were in a bit of a time crunch to find a house.

“We had already moved back, and we were staying with my folks,” Kevin said. “We needed something that was move-in ready. This one was in our price range, and we didn’t love the house, but it was [move-in ready]. It was here, and so, here we were.”

Since then, Kevin and Abby have tried to move two different times, but things have never panned out. At one point it was a buyer’s market, and they didn’t have any luck selling their home. Another time, they found a house they liked, but after the home inspection revealed too many issues, they backed out. 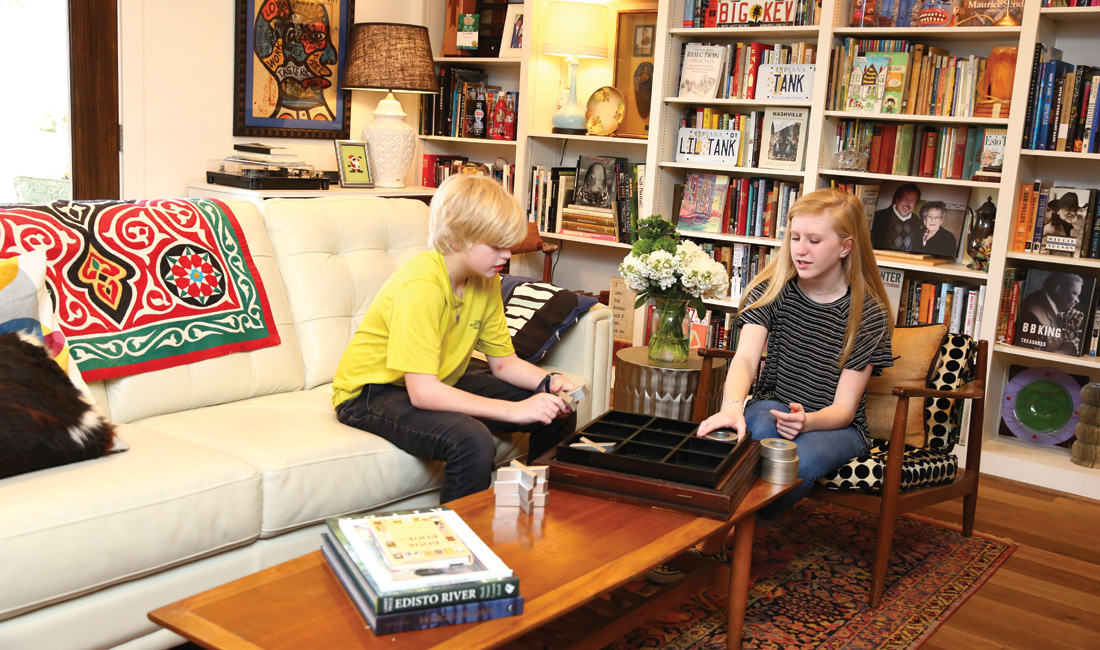 “Now we’ve been here almost 14 years, and we can almost see an empty nest,” Kevin said. Sophie is now 14 and an eighth grader at Midway Middle School, and their son, Brazos, is 12 and in seventh grade. Rather than trying to move again, the Tankersleys bit the bullet, tackling the renovation of their home one project at a time.

It shouldn’t be a surprise that two educators are bibliophiles, but Kevin is also a judge for the Independent Book Publishers Association and on the board of directors for the Friends of the Waco-McLennan County Library. The Tankersleys read a lot of books, they buy a lot of books, and they collect a lot of books. And all of them need a home, so a few years back, the first project they tackled was adding floor-to-ceiling shelves to an empty wall in their living room.

The books are arranged by categories: one section is filled with the magazines and publications that Kevin has written for, another is filled with Abby’s collection of children’s books, signed books line the top row, and sports, art and music books each have a section. This isn’t their complete collection by any means. Books can also be found in the bedrooms, and Chef Abby has a sizeable selection of cookbooks in the kitchen.

More than just displaying books, the shelves also showcase an eclectic collection of art and keepsakes. You’ll find “face jugs” by Waxahachie folk artist Carl Block, a folding chair from the team bench at the 2003 NCAA Men’s Final Four Basketball Tournament, a framed pair of shoes that belonged to Kevin’s great-uncle Clyde, and, of course, the King has a little bit of real estate.

“I’m not saying that’s a shrine to Elvis, but everything on that one shelf is, um, Elvis stuff,” Kevin said.

Just a small sample of his larger collection, a few license plates are tucked in among the books.

You can spot a “Big Kev” plate on the shelf with “TankYou” and “Tank” nearby — Tank is a common nickname for the men in the family — and Brazos has a “Lil Tank” license plate in his room. 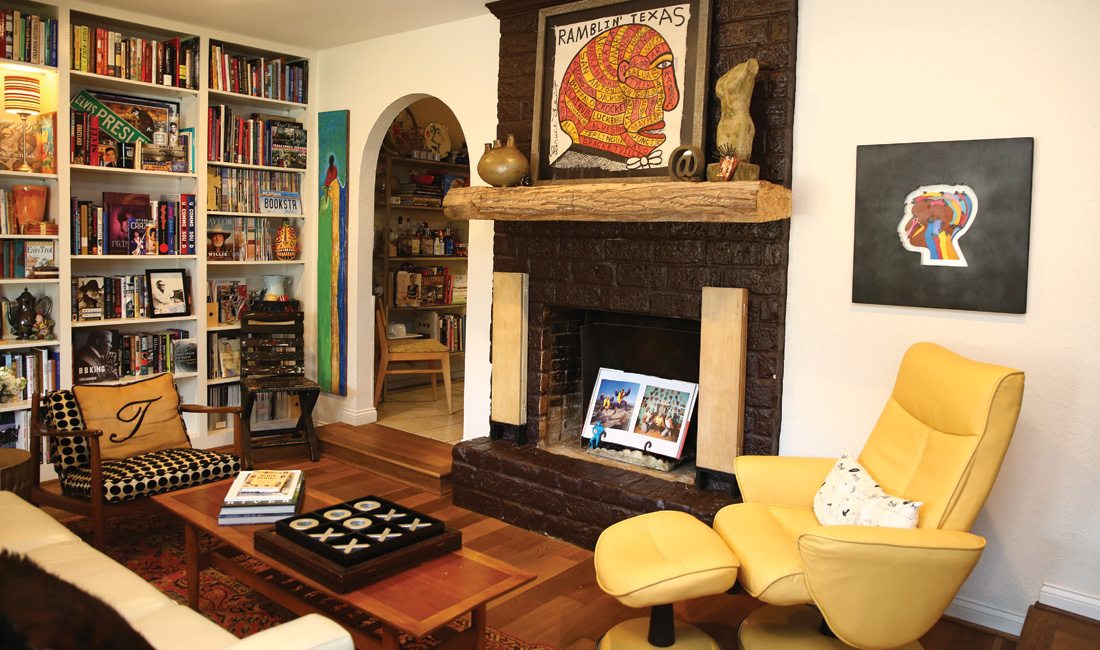 About the same time the shelves were put in, the Tankersleys also had the fireplace revamped. They painted over the white brick with a dark eggplant color, and they exchanged their plain mantel for a large piece of wood from a salvage yard in Hillsboro.

The Tankerlseys think one of the reasons their house didn’t sell a few years back is because it didn’t have any curb appeal.

“We had one of the ugliest houses on the street because it was just this brown siding that had faded,” Abby said. “It was really a non-color. Anything that you would put up against the house would just disappear. You couldn’t see it. We tried putting flowers. Nothing worked.”

Another thing they were unhappy with was the lack of light in the living room. A single front door and a single window didn’t let in enough light, plus a partial wall at the entryway cut off the room, making it feel smaller. Faced with both of these issues, Kevin and Abby decided to move the front door and expand the front porch, and they enlisted their neighbor Bill Painter, the owner of Texas Style Construction, for the project.

Luckily, the existing space had a lot of potential. The porch that was hidden behind a flowerbed was completely covered by the roof, so the bed was removed, the concrete was expanded out, and a large horizontal support beam and two columns at the porch’s edges replaced the single center support beam. The living room window was removed, and the front door was moved to the center of the room and enlarged to accommodate double doors.

“Now, we’ve got chairs out there. When the weather’s nice, I’ll sit out there and read,” Kevin said. “We’ve invited friends over, and we’ll sit on the porch. Sophie plays guitar out there. I’ll force the kids out there sometimes to get them away from [computer and TV] screens.”

Sitting on the porch also provides a way for Kevin to remember and pay tribute to his late father. 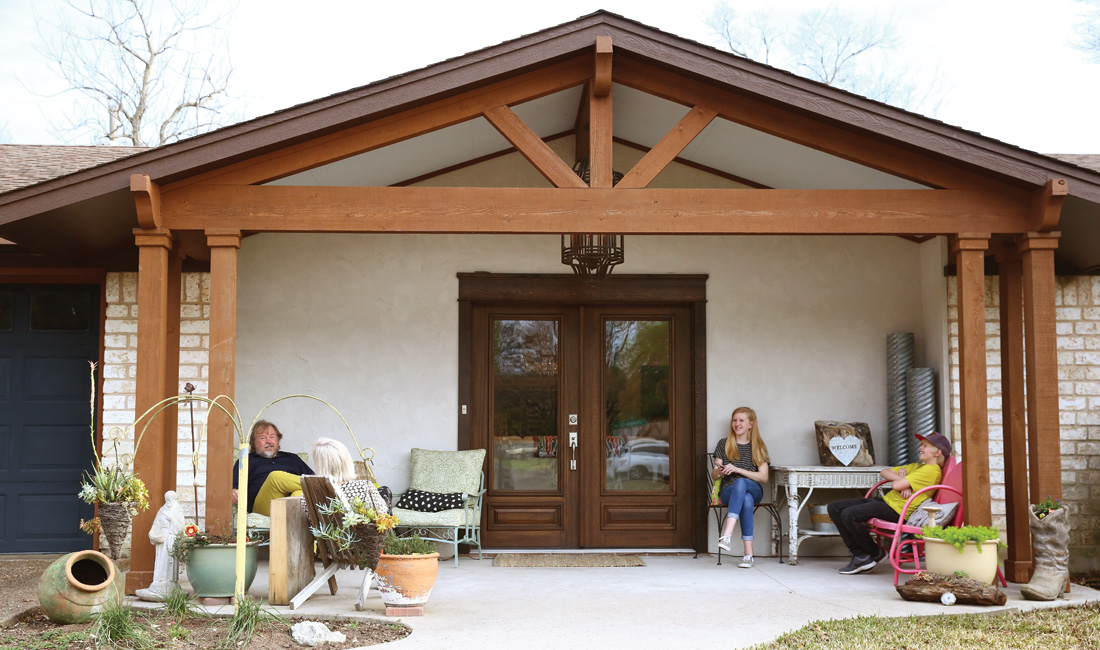 “The last few years of his life until he just couldn’t anymore, Dad would walk 2 miles every day, and he said he had a goal to wave at every single car that drove by. And now, when I’m on the front porch — I’m sitting having a drink, I’m reading — if I see a car, I make a point to wave. I guess it’s kind of taking after Dad.”

Shifting the front door and removing the partial wall from the entryway had the exact effect on the living room that the Tankersleys were hoping for. The double front doors feature full-length glass inserts that allow their collection of folk art to be displayed in the best light.

All over the house, and especially in the living room, you’ll find colorful original artwork. They love the work of Leon Collins, an artist from Navasota who paints early African-American life. The Tankersleys are also regular patrons of the Webb Gallery in Waxahachie, which is owned by Julie and Bruce Webb. They own several works by Bruce, which he signs Bruce Lee. One painting, “Ramblin’ Texas,” hangs above the mantel. Another work by Webb that they own, “Waco Cat,” Kevin recently had tattooed on his bicep. 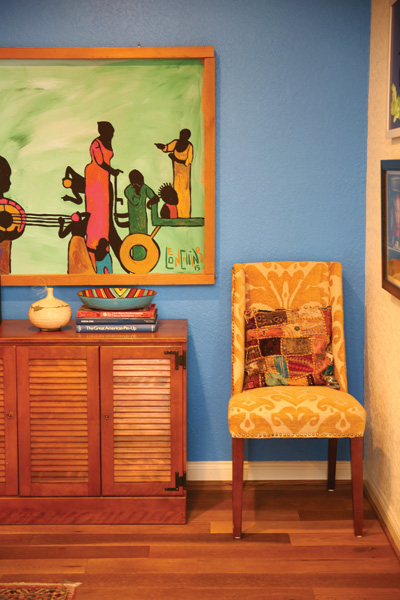 In addition to art, Abby and Kevin like to go junking and antiquing in small towns all over Texas looking for cool furniture, especially if they can find midcentury modern pieces. You’ll also find them scouring some of Waco’s shops like Laverty’s Antiques & Furnishings, Consignment Furniture Showroom and Cedar Chest Antique Mall in McGregor.

Redoing the kitchen was always part of the plan, but the project happened a little sooner than expected, and it didn’t have the best beginning.

“For Brazos’ birthday one year, I went to go put the cake in the oven, and I had preheated the oven — or I thought I had. I turned it on, and I opened the oven, and the oven was cold, completely cold,” Abby said.

The oven that went out was an old built-in that was original to the house, and unfortunately, any new oven they found wasn’t going to fit in the former oven’s small space. It forced them to rethink the entire kitchen.

The space that housed the oven was turned into cabinets, and the oven was moved to be beneath the stove. The microwave was moved and hidden inside the new cabinets. While they were moving things around, they also installed granite countertops and a new backsplash. They removed the built-in desk nook and replaced it with more cabinets for pantry storage.

The stove is a particularly bright spot in the new kitchen for Abby. The home has a gas water heater, and a gas line was already available in the kitchen, but Abby said a previous owner must have put in a glass cooktop at some point. But like most chefs, Abby prefers cooking with gas, so she switched her old cooktop out for a gas range, which she loves.

The rest of the home is a work in progress. The Tankersleys managed to replace the living room and hallway floors with white oak hardwood, and the guest bathroom renovation is already on the books, but they have hefty plans for the den and master suite set for some day in the future.

“If I could do what I want to do, I would blow out the back of the house and expand. Expand our bedroom, our bathroom, get a bigger closet — I would love a bigger closet — bump out the kitchen and then bump out the den. Back there would be all open kitchen, dining, den. It would all be kind of one big room,” Abby said.

Kevin’s fine with that plan, as long as it includes an outdoor shower. He has an entire Pinterest board dedicated to outdoor showers.

“You can step out of the traditional shower, and then you’re outside. Obviously, we’ll be enclosed for privacy, but it will be open air,” he said. “They’re just extensions of the bathroom and have lots of greenery out there. I’ve never had one, never used one. I have no idea why, where the idea came from. I guess I saw a picture of one somewhere.”