Brooklyn has long been perceived as Manhattan’s bruising, brawling older brother, suspiciously eyeing its glamorous skyline across the East River.

The COVID-19 pandemic only accelerated a trend that began more than decade ago, when young urban professionals (remember them?) and families began streaming eastward over the Brooklyn, Manhattan and Williamsburg bridges. What began in uber-trendy Williamsburg has now spread across most of northern Brooklyn, turning Greenpoint, the original “downtown” Brooklyn (known locally as DUMBO), and even most of the once-dicey Bushwick and Bedford-Stuyvesant neighborhoods into desirable places to live – all packed with fabulous restaurants, shops, green spaces, things to do, and places to be.

If you’re weary from negotiating the big (and otherworldly expensive) Broadway plays, restaurants and jam-packed museums, consider the north side of Brooklyn for a few days. Remember, you’re still just a $2.50 ferry ride from the bright lights on Broadway. 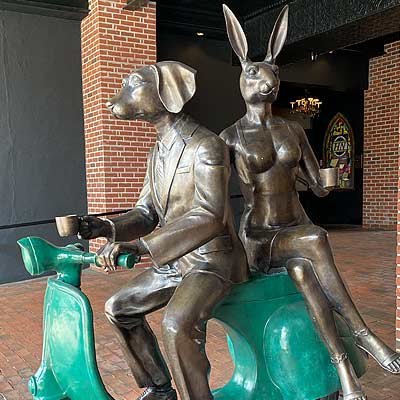 We chose quirky-yet-classy Harry Norman Hotel, walking distance to most of our destinations, yet far cheaper than the rows of fashionable chain hotels closer to the East River. It’s set on the edge of a neighborhood of fast-evolving film and TV production studios and movie lots (many network crime shows are actually filmed in Brooklyn, much of which still resembles the Manhattan of earlier generations). The Norman is around the corner from one of the greatest Old World bakeries in the five boroughs, Syrena. This heavenly old establishment even looks like a movie set, resplendent with shelf after shelf of fresh-baked delights from a dozen Middle Eastern countries. Each morning, the line is stretched out the door in typical Brooklyn fashion – sharp three-piece suits alternating with stained work coveralls – of people loading up for the day. Poets even write odes to their almond croissants.

Thus fortified and accompanied by our two Brooklyn converts, Van and Katie, we undertook the daunting task of exploring this northernmost section of the borough, particularly the area known informally as “Little Poland.” Polish language signage — shops, pharmacies, coffee shops, dentists, grocery stores, travel agencies, laundromats and some businesses we weren’t quite sure what was being advertised — still dominate many streets.

The most Polish experience of all was at the glorious St. Stanislaus Kostka, praised as perhaps the most beautiful Gothic church in greater New York. Inside is extraordinarily lavish, with clouds of pink and cream and mountains of fresh lilies surround a stunning, soaring, multi-faceted golden altar. Masses alternate between Polish and English and on Sunday mornings, ancient and shawled Polish women troop reverently through the doors, while the equally ancient men sit across the street, smoke, drink coffee and speak and laugh in the old tongue.

I take that back: the most Polish experience came at the legendary Karczma Polish Restaurant at 136 Greenpoint, the oldest Polish restaurant in town. Decorated like the set from the Polish version of the old TV show “HeeHaw,” Karczma’s cheery waitstaff pile on luscious heapings of stuffed cabbage, pierogis, kielbasa sausages and dreamy blood sausage. The full bar has Polish, German and Czech beers on tap and we never even made it to dessert. 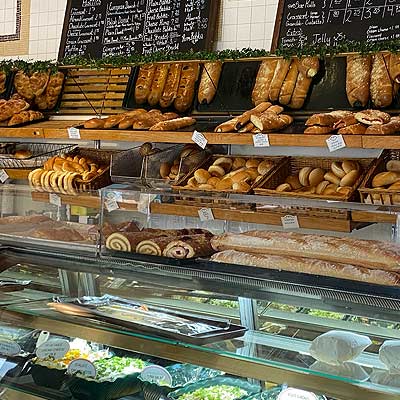 Greenpoint is a foodie paradise, a United Nation’s-worth of international cuisines in just a few blocks. Among our favorites:

– Café Colette (79 Barry Street): chic French-inspired cuisine with a divine Croque Monsieur (be sure and add a deliciously evil poached egg on top)

Manhattan Avenue is Brooklyn’s busiest, most bustling thoroughfare, packed with every shop and restaurant you can imagine, including small specialty grocers, butcher shops, bakeries and flower shops — all within handy walking distance. Also on Manhattan is the famed Peter Pan Bakery and Pastry Shop (727 Manhattan), frozen in time like a Humphrey Bogart movie in the 40s and now a pilgrimage for Marvel Cinematic Universe fans — it’s the setting for the emotional final scene of Spider-Man: No Way Home. 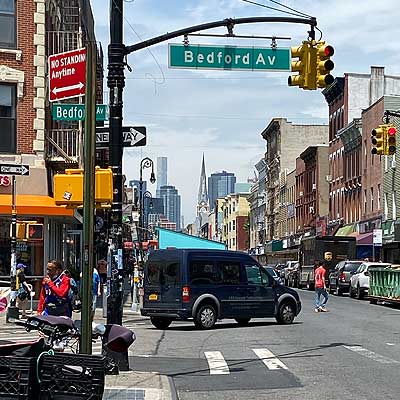 If you need to walk off the saucer-sized doughnuts and egg creams from Peter Pan, north Brooklyn’s two biggest parks are nearby, McGolrick and the considerably larger McCarren. These are proper tree-shaded parks, packed with families and exercise enthusiasts day and night, year round. It seems that every other Brooklyn resident has a dog, and all of them end up at McGolrick and/or McCarren. Despite the heavy usage, they’re both lovingly maintained, festooned with rhododendron beds and lined with well-worn benches, so whether you want to read (everybody carries a book or Kindle), toss the Frisbee with Fido or just watch the chipmucks play kiss and slap, you’ll find your spot. (Also in walking distance are several lovely parks facing the East River.)

What to do? Van and Katie took us on an eye-opening ferry ride ($2.50 for a day pass, best bargain on the East Coast). After bouncing back and forth between Brooklyn and Manhattan a couple of times, our ferry then zipped south around the southern tip of Long Island and past idyllic Governor’s Island, Coney Island (which will get its own ferry stop next year) and Neil Simon’s Brighton Beach to Rockaway and its pristine beaches and back! The top deck of the ferry has spectacular views of Manhattan at dusk and when a brief, but dramatic, shower drove us inside, we were welcomed by a full bar.

You’ve no doubt heard of the massive, much-celebrated New York Botanical Gardens and Bronx Zoo but if you’re not up for equally massive crowds, a quick Uber/Lyft will take you to the Brooklyn Botanic Gardens, which are nearly as impressive. It takes a full afternoon or more explore this unassuming jewel, with long avenues lined with everything from cherry trees to roses or peonies, entire sections given over to different seasonal flowers, long walks under a thick canopy of trees right out of a J.R.R. Tolkien novel, an informative enclosed arboretum (with centuries-old bonsai trees), the organic, vegetable-heavy Yellow Magnolia Café, a plot dedicated to plants mentioned in Shakespeare’s plays and the first Japanese garden in the U.S. Save for the Sakura Matsuri Festival in the Spring when the cherry trees blossom and crowds converge, you can find quiet, contemplative spots everywhere, in part because the Garden borders the even larger Prospect Park to the south and the Brooklyn Museum complex to the north.

The Brooklyn Museum, the second largest in New York is an impressive monolithic-looking structure on a hill that overlooks much of the city. Again, if you’re tired of fighting the jostling crowds across the East River at the Met or the Museum of Natural History, we’re told that you’ve got plenty of elbow room here. Justly famed for the biggest Egyptian Collection outside of London, both the sections devoted to the Impressionists and Early American Art are equally peerless. An exhibit of the work of Andy Warhol was the focus while we were there, with an emphasis on his relationship with the Ukrainian Catholic Church.

Part of the fun of the Botanic Gardens and Museum is, literally, getting there — you’ll pass through historic neighborhoods like Prospect Park and Crown Heights that you’ve heard about (or seen in movies) all your life, lined by gorgeous, lovingly tended brownstones with equally stunning window flower boxes.

The most fascinating neighborhood adjoining Greenpoint is Williamsburg, where yuppies and Orthodox Jews meet. Williamsburg is one of several fiercely independent enclaves (along with Crown Heights and, further south, Borough Park) dominated by the different kinds of Judaism — Hasidic, Lubavitcher, Satmar. The streets are dominated by kosher delis and restaurants, synagogues, schools and shops and – mostly – families dressed in traditional clothing. The different kinds of hats and head coverings, even within a single block, are remarkable; kashket, hoiche, kippahs and yarmulkes dominate and — in certain areas on certain days — the distinctive fur shtreimel hats can be seen a block away. Several groups and individuals offer walking tours (except on the Saturday Sabbath, of course) and it’s high on our list for our next visit.

In fact, just plain walking is one of the attractions in Brooklyn. Each street, each block is radically different, though the homes in Greenpoint tend to be on the side streets. Some sections look virtually unchanged since the beginning of the last century. You’ll find off-beat bookstores (including the friendly and jam-packed Comic Book Station on Eckford), chocolatiers, the ubiquitous coffee shops, small ethnic and organic grocery stores and the tiny Film Noir Cinema (122 Meserole), a 54-seat art-house that also shows indie and foreign films, as well as “Double Indemnity,” “The Big Sleep” and “Kiss Me Deadly.” The last blocks before the ferry took us by a Whole Foods, a lively Mexican bodega, an ecology-friendly cleaners and a Mandarin language immersion Montessori school.

At our savvy guides’ suggestion, on our last night we walked up bustling Greenpoint Avenue, which ends at the WNYC Transmitter Park on the East River and the most magnificent views of Manhattan we’d ever seen. The sights and sounds of the city are magnified here in a way that actually being in the city canyons can’t match. We watched as a skyscraper transformed its lights into a yellow and blue tribute to Ukraine. We could see a small flotilla of boats anchored on the river as the crews watched a showing of “The Blues Brothers” on a giant screen. Smells from Paui Gee’s Pizzeria and Di An Di’s Vietnamese restaurants on Greenpoint drifted up the pier. A few seagulls scolded us.

Marilyn Monroe once famously said, “I’ve fallen in love with Brooklyn. I’m going to buy a little house in Brooklyn and live there. I’ll go to the coast only when I have to make a movie.”

I’m not sure I ever got it until now.