Wendy Michelle Davis loves the outdoors. That is evident in the way she lives her life and in the way that she makes art.

Most of her paintings depict something found in nature. Flowers. Birds. Pine cones on a branch.

“It’s like bringing a piece of [nature] to my canvas and to the inside,” she said. “It’s bringing something like a flower — that’s very temporal and fleeting in its beauty — and making it lasting and something that myself or anyone can have forever.”

Davis grew up in Elk Grove, California, where “art has been a part of my life since I can remember,” she said. “I’ve always loved art since I was a child and would always find ways to create art, whether it’s a pile of old computer paper or pencils and crayons.”

She earned her bachelor’s degree in English at Simpson University, where she was a member of the soccer team, and went on to earn a master’s at Concordia University in Portland, Oregon. She has taught English as a second language all over the world, including a stint in Laos, in Southeast Asia. And most recently she taught that subject as an adjunct instructor at McLennan Community College.

She was also an ESL teacher in Abu Dhabi, working with students up to fifth grade.

“I loved living in a place where it was just a mesh of cultures and people,” Davis said. “Abu Dhabi brings in all kinds of cultures because they recruit from all over the world, and they pay well.”

Even though she was teaching English, Davis was still able to show her art. She had pieces on display at the Fairmont Hotel for several months and also had a show at the The Art Hub in Abu Dhabi.

In Waco, where she has lived for three years, Davis does her painting at Maker’s Edge Makerspace, on Austin Avenue, in a studio space sponsored for her by Creative Waco, “which is huge,” she said. “It’s really helpful.”

She uses acrylic paints instead of oils, she said, “because I have a fast pace when I paint. I paint the quicker brushstroke, and oils are just slower. It takes longer for them to dry. They’re toxic, and they’re a lot messier than acrylic. So I just like acrylics. I think you get the same effect.”

In addition to her passion for art, Davis enjoys hiking — where she often finds and photographs scenes that she later paints — as well as hosting dinner parties, reading, listening to live music and playing tennis. She leads a couple of different United States Tennis Association leagues at the Waco Regional Tennis and Fitness Center. 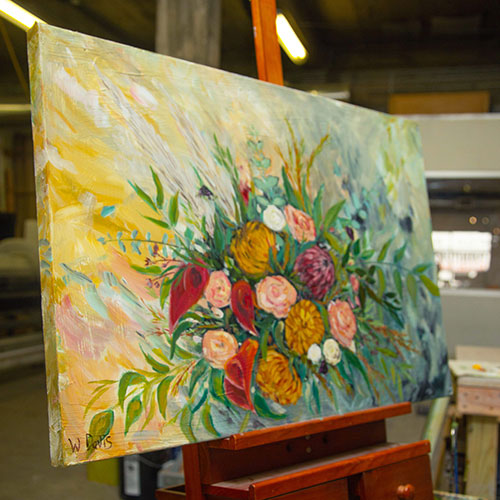 Besides teaching English, Davis has also been working as a floral designer for Wolfe Florist in Waco. In fact, she gets much of her inspiration for paintings of flowers from the work she does at Wolfe. But she’s making a transition out of both teaching and floral work to devote herself full time to art. She has a few pieces on display at Cultivate 7Twelve on Austin Avenue in Waco, and her art can be seen on her Instagram page, wendy_michelle_davis; on her website, wendymichelledavis.com; and at her Etsy store, WendyMichelleDavis.