Thomas Csorba grew up in Houston and now lives in Dallas, but his new record has plenty of Waco connections. He wrote most of the songs on the new album while he was a student at Baylor. He graduated with an English degree in December 2019 and can recall exactly where he was as he was writing.

“I lived in a little back house there in Castle Heights, just across the street from Pinewood [Coffee Bar],” he said. “And I have some specific memories of sitting there in probably 300 square feet, a little garage apartment, and watching some of these ideas come to fruition. I’ve gone back recently and listened to some of the voice memos, the initial 30-second recordings of some of the songs that have now made it on the record, and you can hear the garbage man come down the alley. It’s really a trip thinking back to that time and getting to make those songs.”

Csorba has some fond memories of his time at Baylor, specifically in an American poetry class with Dr. Julia Daniel — “Poetry is kind of my jam,” he said — and in Dr. Richard Rankin Russell’s class on the modern British novel.

“He was the last professor I had in my last semester,” Csorba said. “And some of that stuff is out of my comfort zone. But he did a great job at sparking my interest in something I wouldn’t have otherwise read.”

Csorba said he quickly learned — in a poetry-writing class with Dr. Chloe Honum — “that I’m not very good at writing poetry. Obviously, there’s some similarities [to songwriting]. You’re using a similar part of your brain. But the form is so much different than I think I realized. But the great thing about being in the English department was I was constantly being fed really great art.”

Like fellow musicians and other creatives, Csorba is finding it challenging to get his art out to fans during a pandemic. Under normal circumstances, he would be touring — something he’s done since he was 16 — in support of the album, but now he just has to get the word out about his new music.

“I think you make the art and the record that you believe in and surround yourself with the right people that know how to bring it to the people and hope that it stands up,” he said. “I’m already working on the next record. I don’t feel like I have time to get hung up on how many streams I’m getting on Spotify and how many likes I’m getting on an Instagram post. It’s like, I’ve got work to do. I’ve still got records and songs to write, you know?”

He runs a lean business, consisting of himself, a manager and a publicist, so he can experiment with merchandise available on his website. If he wanted to experiment with selling coffee cups emblazoned with his name or photo, he could invest a couple of hundred dollars and do that. One of the bestselling items he’s made available is handwritten lyrics to his songs, especially those to songs that aren’t available online.

For $40, a fan can pick a song and “I’ll sit at my dining room table, write it out, write them a thank-you note and send it their way,” he said. “It’s a cool, special kind of deal. Honestly, it’s been a big chunk of the merch income these days. I feel like a lot of people really want something unique like that.” 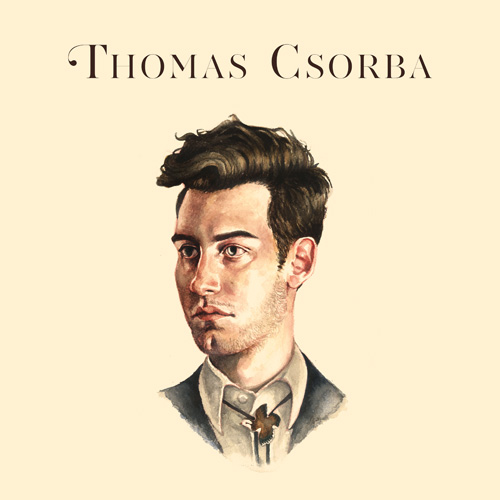 Thomas Csorba’s self-titled album will be out September 25. He’s recorded plenty of music before, but “it really does feel like a debut,” he said.

“It really is the first time I walked into the studio with, OK, this is what I want to do — at least to this degree — and that was to make classic American music and to make a record that people don’t want to skip a song all the way through. That’s what we set out to do, and in my eyes, that’s what we did.”

The album and merchandise are available at thomascsorba.com.