He grew up in Waco, graduated from Robinson High School then McLennan Community College and is now a three-time Grammy-winning music producer who has worked with a list of big names that reads like the awards show red carpet who’s-who.

Larry D. Griffin Jr., who goes by Symbolyc One (S1), knew that music was his calling at a young age, and he pursued it with a level of determination that has taken him to recognition as one of the top music producers in the industry.

He has a mindset that has taken him to the top of the music industry all while staying true to his roots, his upbringing and his faith.

And now he’s written an inspiring memoir detailing his life’s journey so far and what it has taken for him to pursue his dreams. “Pray. Focus. Plan. Execute: A Memoir by S1” was released in January.

In one chapter, he talks about going to concerts right after moving to Dallas, before he had an established career. At an Erykah Badu concert he was so moved by her music, he envisioned working with her one day while watching from his seat in the balcony of the Bronco Bowl.

“I have to work with her somehow,” Griffin writes. “As I spoke, it felt so real to me, although I didn’t have a clue how this would happen, since she had no clue who I was. But I knew that I wanted to work with her and make music that impacted people the same way she made me feel that night.”

It took a few years, but eventually he got a phone call from her and they began to work together soon after.

“I believe that in that moment right there [at the concert], God was already working things out for me,” Griffin said. “It was just a matter of me playing my part and doing what I need to do and control the things I can control which is just putting in the work, making sure I was focused and making sure I had a plan and was working that plan.”

Griffin will be in Waco February 22 for the premiere of “Blood, Sweat & Beats: The Waco Hip Hop Story” where he will be part of a Q&A panel with filmmakers, including director Lindsay Liepman. 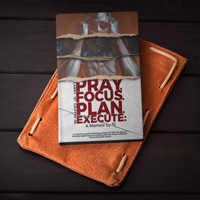 “I want people to know my story, but more so I want people to just realize that they can accomplish their goals as well,” Griffin said. “There’s no difference between me and anybody else. It’s just a matter of me recognizing that principles work. But the only way that we can have any type of success or achieve anything from the principles is we have to work them consistently, every day.”
You can purchase a copy of the book at symbolycone.com. The e-book is available through Amazon, Apple Books and Barnes & Noble.
The audiobook
is also available at audible.com.