Skcoobaveli Trevino was mad. It was early in June, and the world had been dealing with the COVID-19 pandemic for a couple of months. There were riots around the country and peaceful protests in Waco following the death of George Floyd. And then Frankie Gonzales went missing. Community members joined law enforcement in searching Cameron Park before the 2-year-old’s body was found in a dumpster.

“So when that happened, I probably slept four hours. When I woke up, I felt like I needed to do something, man,” Trevino said. “I woke up, and the first thing I saw was Frankie’s picture, that face. That’s a nice picture, man. That’s a good picture. It’d be nice to paint that picture. And I needed to release those emotions on something.”

In his backyard Trevino had a big board, about 6 feet by 4 feet, so he got to work painting that picture. In 2 1/2 hours, using spray paint, he re-created that photo of Frankie.

“I wish I had more time but also wanted to have it ready for the candlelight [vigil],” he said.

Trevino and his friend Sean Skellington loaded the painting into a truck and took it to the site of the vigil. They found an empty spot next to a tree and placed the board there.

“As soon as we put it down, there was a bunch of oohs and aahs. Then when I turned, we already had a crowd. And it was a big ol’ scene. It was a dome of people taking pictures and recording,” Trevino said.

Trevino has been interested in art since he was a youngster, when he was inspired by comic books.

“That art always amazed me because before I could even read, I could know the story by looking at the pictures. So that made me want to draw,” he said.

“Art’s in everything, from hair, from makeup, to the way a person speaks, learning different accents,” he said. “Comedy is also an art. There’s the art in music and the art of acting, and everything is art. I just try to be a jack of all trades, man.”

One of Trevino’s murals — a ninja turtle and a slice of pizza — can be seen at Slow Rise Slice House in Woodway. “I put the city in the background, the city silhouette. And then there was a little slow rise sun coming up,” he said.

Trevino’s often seen wearing a shirt with “Skcumbag” written on it, a term he’s come to embrace.

“It’s a reminder for other people to don’t judge a book by its cover,” he said. “They’ll look at me with my nappy hair, dirty beard and everything; it’s like, ‘We’ll sit them by the restroom.’ But now people see, ‘Hey, that’s the scumbag. We appreciate what you’re doing with the community.’

“If a guy like me can be in the Wacoan magazine or make beautiful paintings around town and get paid for them and have friends from different walks of life opening their arms and houses and businesses for a scumbag like me, then it doesn’t matter what kind of person you are. You can do this too.” 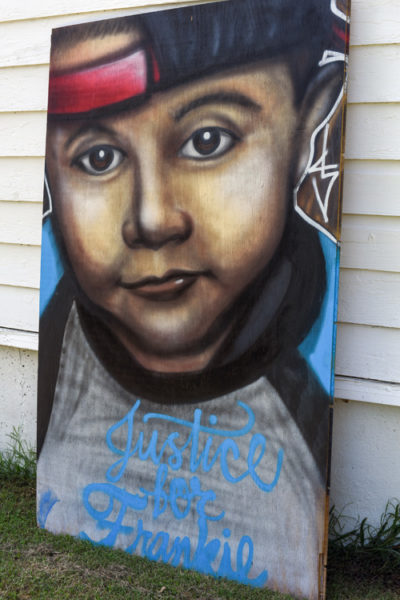 Trevino will be the featured artist this month at Skellington Curiosities in the Bosque Square Shopping Center, and more art can be seen on his social media platforms.

“Facebook’s my main squeeze right now,” he said. “And Instagram, I’ll post a couple of things here and there. But I’m really all over the place, you know, and, nobody knows what I’m gonna do next, except for me right in that moment. So I could pop up anywhere at any given time.”