In September 2002, a member of Carver Park Baptist Church asked the Rev. Thomas Brooks to put together a choir for a three-day women’s conference the church was hosting. Brooks put out the call for singers and had enough folks come together for performances at the conference. The choir was such a success that the members stayed together and became the Waco Community Choir, which is celebrating its 10th anniversary this month, and Brooks is still the group’s director.

Brooks came to Waco in 1985 to attend Paul Quinn College. After graduation, he taught in Waco ISD schools and at Texas Juvenile Justice Department for a number of years. He was born in Odessa and grew up in Shiner, San Antonio, Bastrop and Waco. It was when his family was living in Shiner that his grandmother “put me up to sing when I was 3” at New Jerusalem Missionary Baptist Church.

“So I’ve been doing it since I was little,” he said. “I have an extensive background in in singing I sang all through high school, went to San Antonio College, and started there studying under Mr. Theron Kirk, who was the director there and chairman of the music department. Then when I came to Paul Quinn, I was there under Dr. Beverly Garten, so musically, I’ve been around playing in churches and so forth. I was a voice major at one time.”

Waco Community Choir rehearses every Monday night, and, prior to COVID, had a robust performance schedule. That’s slowed down a bit, but the group recently performed with Waco singer Holly Tucker, this past July at a Sunday morning worship service at First Woodway Baptist Church.

Tucker, the church’s choir and Waco Community Choir collaborated on the CeCe Winans song “Believe For It.”“So blessed to have led this powerful song at my home church First Woodway with the Waco Community Choir this past Sunday,” Tucker wrote on her Facebook page after the service.

Brooks describes the choir as a family, and members of the choir agree. 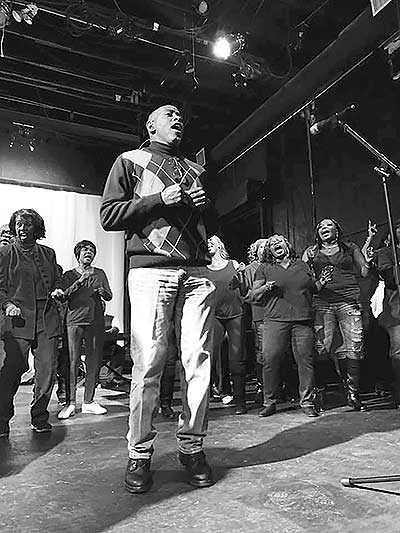 Brenda Shelton has also been with the choir for 10 years, and her friendship with Brooks goes back even further, to her days singing R&B.

Brooks, who has an eye disease called retinitis pigmentosa, which gradually causes vision loss, is able to single out choir members during rehearsal, just from hearing their voices.

“If this person is not singing OK, he knows he knows every single voice in the choir,” Daniel said. “That’s a gift from God.”

Brooks said he learned he had retinitis pigmentosa when he was 25 – he’s 59 now – and having trouble driving at night.

“I went to see a doctor here in Waco. And he diagnosed it and sent me all over the world and made sure that his diagnosis was correct,” he said. “I don’t let it stop me. I keep moving. That’s what I encourage. You can’t let a disability or an impairment steal your joy. The rest of me works, so if that’s the sacrifice I have to make at this particular juncture, then that’s fine. I believe that that God will heal me, just like just like Jesus heals in the New Testament. I believe that my healing is coming. Praise God.”

“We’ve done quite a bit of rehearsing trying to prepare for our own recording project,” Brooks said. And he has another single – his second – that will be released on digital platforms in the next few weeks. He may also make a few CDs of the song available “for older people who don’t download,” he said, laughing.

The upcoming single will be “Whole Armor of God,” Brooks said.

“It just encourages people to put on the whole armor, so that whatever’s trying to upset you or derail you, you’re not derailed by that,” he said.

“And whatever you’re doing, stand strong, knowing that God is your protector, God is your supporter. And in actuality, when you put on the armor, God will fight your battle, but you got to be there, you got to stand up, you’ve got to put forth some effort as well.”

One of the choir’s songs available digitally is “I’m Better Than That,” which was co-written by Brooks and the rapper Malcom Collins, who goes by MxC Spoken Word. Collins is also a featured performer on the song.

“I listen to all types of music to get ideas,” Brooks said. “If I’m going to reach the younger generation, then I have to speak to them in a generation voice, so I have to know what they listen to, how it affects them, what the music is saying, or what the lyrics are saying. And then I kind of learn to flip the script.”