Josh Barnard has often considered moving to Austin or Nashville, cities that place a premium on live music and tout themselves as music-friendly places. Instead, he’s chosen to stay in Waco — close to his family — and carve out a music career here. He owns Rabbit Hole Recording Co., a studio where musicians can enter “with just a raw song and an acoustic guitar,” Barnard said. Barnard then puts on his producer hat, helping the musician write an arrangement for the song. Or Barnard will write the music and bring in session players and an engineer to record one song or an entire album.
He also does live production work, setting up and running sound systems for events and festivals.

“We’re involved in pretty much anything that revolves around music,” he said.

And Barnard is a musician himself. He often performs as a solo artist, performing his own songs, and he is the lead guitarist and vocalist in the trio The Standards, along with bass player Jason Carter and drummer Trevor Davis. Barnard also owns Barnard Music, which offers lessons and band camps to young musicians in and around Waco.

“I had a lot of great instructors growing up, and I recall sitting in those lessons thinking, ‘Oh, this is interesting,’ and I could see myself sitting on the other side helping somebody achieve a similar goal,” he said. “Coming into adulthood, I was trying to figure out how to make a living and keep an instrument in my hands all day, every day, because that’s the only way as far as I can tell to be as good as I aspire to be.”

One of Barnard’s musical heroes is Townes Van Zandt, a legendary singer-songwriter who died January 1, 1997. Barnard had an opportunity meet Van Zandt’s son, J.T., who owns Van Zandt Fly Fishing Co. in Rockport, Texas, on a fishing excursion a few years back. In planning the trip, “I [had] no plans on telling J.T. who I am or what I do. I [didn’t] want him to know that I have anything to do with music. I just want to hear him talk,” Barnard said.

“It turns out, fly-fishing is really hard. I didn’t realize that. So I piss this guy off immediately, by not being good at fly-fishing and kind of wasting his time. He read me like a book.” Barnard said. “I felt like he knew everything about me within the first couple hours — and I hardly said anything — but nailed down some issues that I was dealing with in my personal life. I was probably 25 years old. I was struggling, I was in a spot where I was struggling with writing songs. And he just told me a lot of things that I really needed to hear. And I broke down crying at one point, coming back to the boat dock, I’ve just taken in the whole day.

“Fly-fishing, I’m completely fascinated with it. It’s an art form, very similar to music. J.T. really helped paint a picture of why and how it was. There’s just so much finesse, and there’s a craft that you really have to hone and you can’t fake your way into it, you have to earn it. It’s the same way that you can’t fake your way into songwriting.” 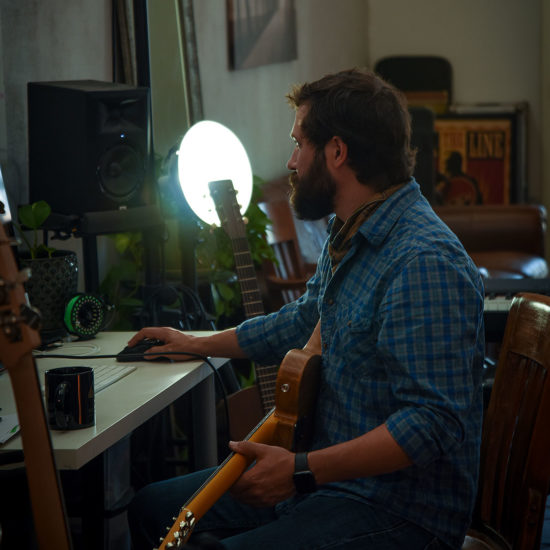 Barnard joined some cover bands, “but I always wanted to be on the Texas music scene, playing original music,” he said.

To make ends meet, he worked in construction and then at a boat shop, until a co-worker said, “Man, if your passion is music, you just need to go do that.”

That’s when Barnard started teaching, meeting with students from noon to about 8 p.m., then sitting down for practice sessions from about 9 p.m. to 3 or 4 in the morning.

“I did that religiously for a year, and then I’d go play gigs on the weekends,” he said.