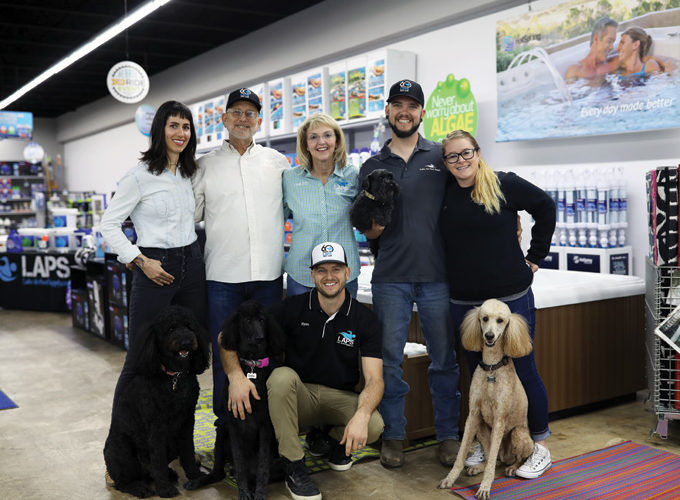 As Lake Air Pool Supply enters its 60th year, they want to express their sincere appreciation and heartfelt gratitude to the people of Central Texas for all the wonderful years in business. This year will be full of celebration while reflecting on where they have been and refocusing their vision on the future. When LAPS was founded in 1959 by Bob & Alice Hollingsworth, it was called Lake Air Pools, Inc. All pool construction operations were run out of their home in Robinson. By the early 60s they had moved the business to Dutton Avenue directly across from the old Floyd Casey Stadium. At this location, they began the service department to run alongside the construction team. As business picked up and the demand was apparent, they opened up their first retail location in the Southgate Shopping Center on South Valley Mills. It was at this time, in the early 1970s, that, after a dinner meeting at the old Black Angus on the circle, Lake Air Pools began its partnership with BioGuard chemical company. After almost 45 years they still sell BioGuard almost exclusively! In 1982, Charles and Anabell Schraeder, along with Spencer and Delores Johnson, purchased the retail and service departments and in sticking with the family business name, created Lake Air Pool Supply. By 1985, they relocated to their current location on Franklin Avenue. In April of 2006, David and Charlotte Schraeder-Jordan purchased LAPS. Then in 2011, LAPS further expanded to include a hot tub department featuring HotSpring Spas. In 2016, the store underwent a complete remodel and last February they opened a hot tub warehouse just down the block. The LAPS family legacy now spans three generations, has twelve service vans on the road and 28 employees, including husband and wife and father and son teams.