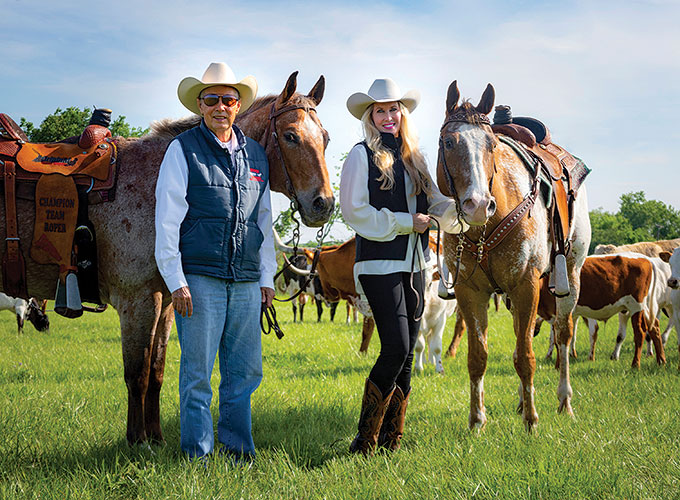 Pursuing Excellence for All Time

Johnson Roofing was born out of Margaret and Jack Johnson’s home-building, lumberyard, and cabinet-shop businesses, founded in the 1930s in downtown Waco. Margaret was the backbone of the operation, while Jack handled sales and performed the work alongside their employees. Their son, Bill, was born in 1941. Christianity and excellence were, and continues today, to be the foundation on which the Johnsons live their lives.
In the mid-1960s, after Bill graduated from Baylor University, a massive hailstorm hit Waco. Jack and Bill hauled shingles in a horse trailer and helped people get their roofs back on, while Margaret held down the office. That’s when Johnson Roofing ignited, moving its corporate headquarters adjacent to the family’s JMB Appaloosa Ranch. Bill also became involved in the Roofing Contractors Association of Texas (RCAT), a statewide trade association. For many years, the Johnson family vacationed in San Antonio during the annual RCAT Conference.
Under Bill’s leadership, Johnson Roofing continued to serve residential customers. Commercial projects significantly increased in the 1980s. During that time, Bill was named president of RCAT. By the 1990s, Johnson Roofing became one of the largest roofing contractors in Texas, where it remains today, and Bill received RCAT’s top honor, The Curtis Blackwell Memorial Award, for significant contribution to the roofing industry.
Bill’s daughter, Sherri Johnson McDonald was exposed to roofing her entire life, but she never expected to work for, must less, run Johnson Roofing. When Hurricane Ike hit in 2008, that changed. Sherri went to Houston to help her dad set up an office, and she was selling for Johnson Roofing. She came back to Waco, and never left. She became Johnson Roofing’s Business Development Manager earning her dad’s trust to advance up through the ranks.
In 2018, Sherri was named the president of RCAT making her only the second woman to lead the association in its 45-year history. Sherri and Bill are RCAT’s sole, parent-child past presidents.
Sherri is now Johnson Roofing’s third-generation CEO while Bill serves as Chairman of the Board. With projects spanning from South Texas to Oklahoma, Johnson Roofing opened two offices to serve the North Texas region and the South Texas region. Sherri also launched Johnson Roofing University (JRU), a training program that encourages the development of the company’s 120-plus member Field Team.
The goals are simple at Johnson Roofing: 1. Everyone goes home safely to their families every day and 2. Excellence in all work. The company is celebrating its 80th anniversary this year.