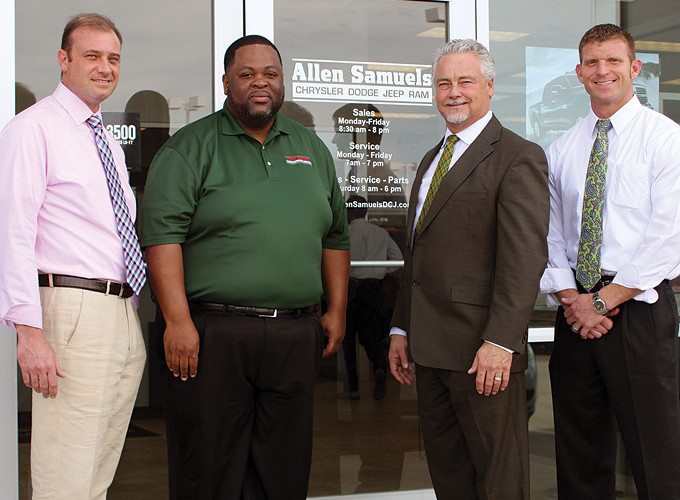 Come by… Let’s be friends!

Doing business the right way…That’s the Allen Samuels way. Since his first dealership some 25 years ago in Waco, Allen Samuels has revolutionized the automobile industry by creating a model for customer service, buyer satisfaction and community involvement. With dealerships in the state of Texas and a brand new one in Mississippi, the Samuels brands include Dodge, Chrysler, Jeep, Ram, Fiat, Chevrolet, Hyundai and Mercedes Benz. The Waco Dodge Chrysler Jeep Ram dealership opened in 2009 on Valley Mills Drive and relocated to its new state-of-the-art location two years later. Located at Loop 340 and Highway 84, it’s one of the highest performing stores in Texas. Ted Teague is the General Manager and leads an award winning team of highly trained sales associates and service technicians. Allen Samuels was awarded the Fiat franchise for Central Texas and opened at the current Dodge location. In 2012, Fiat received its own new Fiat Studio building. Now, more changes are in store. Fiat Chrysler announced that a select group of dealerships would be partnered with the famed Alfa Romeo brand and Allen Samuels was selected as one of only 79 Alfa Romeo dealerships in the USA. Additionally, groundbreaking for a brand new location for Alfa Romeo Fiat took place April 1st. The dealership will be located at the corner of Loop 340 and Bagby across from The Marketplace. This past fall, Billy Martin was named General Manager of the Alfa Romeo Fiat store. Billy is no stranger to Central Texas. As former GM of Allen Samuels Chevrolet in Waco and later in Corpus Christi, he’s totally familiar with Waco and the Allen Samuels philosophy. For decades, Allen Samuels has extended the well-known invitation; “Come by… Let’s be friends!” It still stands today and is the way they continue to do business.