Mark and Jenni McCollum live in Houston but spend enough time in Waco that they felt justified in buying a downtown condo. The two-bedroom unit in the Kress Lofts served its purpose, giving the McCollums and their children a landing spot for Baylor football weekends and Mark’s frequent trips to town to fulfill his duties as a Baylor University regent.

But when grandchildren entered the picture, it was obvious they needed a bigger space. Their son, Matthew, a real estate broker, helped in their search for a spot large enough to host all the family. The first criteria, Jenni said, was a tree big enough for a swing. Their house in the Memorial area of Houston had a tree swing that the grandchildren enjoyed, but with the condo, “I couldn’t put a swing on the parking lot,” Jenni said.

After a couple of years of looking, a house in Crawford came to their attention. A house with an oak tree in the front yard that can hold two swings. The house was built in the early ’80s and had just two owners since.

The McCollums sold the Memorial house in Houston and downsized to a patio home there.

“There were a couple of times we actually tried to come see [the house in Crawford], but we’re only available on weekends,” Jenni said. “All we could do before that was peek over the fence. One time we drove up here, and Mark and my son got out of the car and they were looking in and were like, ‘Oh, look over there. Look over there.’ I could just tell they were so in love with the land. And so the one day we finally were able to get in, we walked in and I just kind of stood in this room and all of a sudden I went, ‘I think I can figure it out. I think I can make this work.’ But honestly, whatever we did do, the house seemed to be secondary to the view and what we could see on this land.” 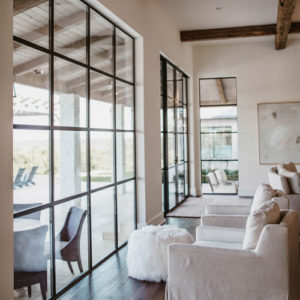 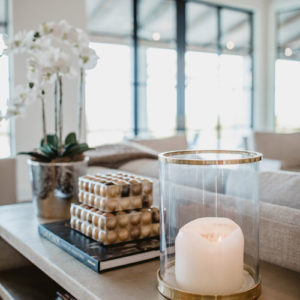 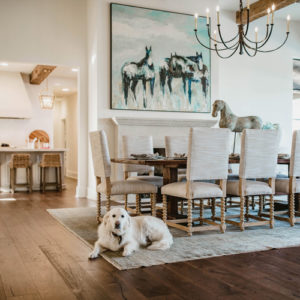 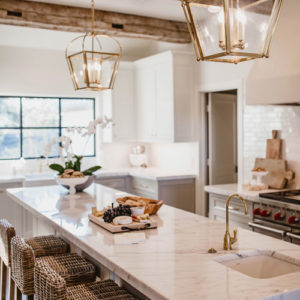 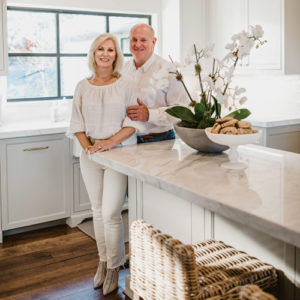 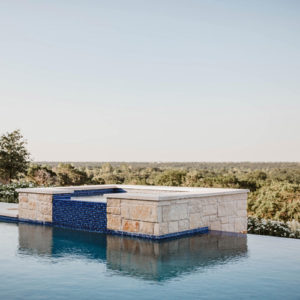 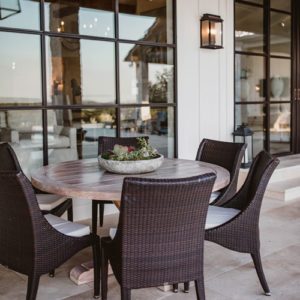 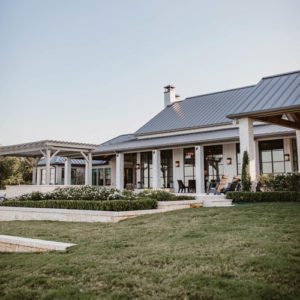 “This room” is a spacious living/dining combination that is abundant with natural light, from the large all-glass front door to the opposite wall of windows that overlooks the patio, pool and a view that extends for miles.

On a clear day, the Texas Farm Bureau building can be seen in the distance, as well as the water tower near China Spring High School and a water tower on the other side of Lake Waco. On a clear night, the lights of the Waco Regional Airport are visible.

Beyond the patio, a sharp drop-off leads to the Bosque River, and when Jenni drinks her morning coffee on the patio, she watches mist rise from the water.

And while the view was impeccable, the house itself was not. It was built in the ’80s and hadn’t been updated, thus “it was a total redo,” Mark said.

“Jeff Irwin with LakeHill Builders [in Waco] came out and started working with us about what to do. It was so massive; there was a point when Jeff was like, ‘You know, I think it’d be easier to bulldoze this thing and start over.’ But the house has good bones. And we loved the layout. The character of the house itself was good.”

The most significant change to the house’s main room was taking out a stone fireplace that dominated the back wall of the house and blocked a significant portion of the view. Now, thanks to Jenni’s love of symmetry, there’s a fireplace at either end of the room, and that back wall is comprised mostly of glass.

“That was quite an undertaking to take out that really big fireplace, but the views were just so worth it,” Jenni said.

The modern farmhouse-style home is appointed with light-colored, but child-safe, furniture, much of which was brought from the downtown loft or the house in Houston, including a dining table that seats 10.

“We sit at that table so much more here than it ever got used in Houston,” Jenni said. “Just since we’ve been here one year, we’ve had so many holiday meals and family meals at that table. It’s been so wonderful.”

Jenni had help with the house from her Houston designers, Amy Munger and Elizabeth Munger Stiver of Munger Interiors. They worked with Heritage Restorations on the beams on the living room ceiling, wood that was reclaimed from a Canadian barn built in the 1800s.

Even though the McCollums didn’t change the footprint of the house, they increased the number of bedrooms.

“What we were really wanting more than anything was enough bedrooms for everyone to feel like they had their own space and their own bathroom,” Jenni said. “So we really were pleased to end up with six bedrooms, and it was a three-bedroom house to begin with.”

The house originally had two garages. One of those was converted into a three-bedroom suite so the McCollums’ son and his family could stay in their own space. An office off the front entryway is now a bedroom and bathroom used by their daughter on her visits. There’s a room with four bunk beds, and then down a hall, the master suite now contains what Jenni and Mark call their “morning room,” with a couch, TV and coffee bar. That space was previously a workout room, Jenni said.

“It’s really wonderful when we’re all gathered. Everybody’s got a space to retreat to, and yet we’ve got this one central area for the family,” she added.

Matthew McCollum and his wife, Courtney, are both Baylor graduates. Matthew owns Elm Fork Realty in Lewisville, and they’re the parents of four children: Audrey Kate, 7; Leighton, 5 — “She would want you to know she’s going to be 6 in October,” Jenni said — and twins Jackson and Sloane, 3 1/2.

Mark and Jenni’s daughter, Maddie, graduated from Belmont University before going to Culinary Institute Lenotre in Houston. She now runs her own baking business, Maddiecakes, in Houston.

Mark and Jenni both graduated from Baylor in 1980. She earned a degree in secondary education and then received her master’s degree in educational psychology from the University of Houston in 1982 and worked as a school diagnostician.

Mark received a degree in accounting and is a CPA. He is also president and CEO of Weatherford International PLC, a multinational oilfield service company. He has been a Baylor regent since 2011.

Since they moved into their Crawford home about a year ago, Jenni, Mark or both of them have been at the house three out of four weekends every month, she said. Jenni and her mother and sister were at the house for most of March and April looking after Jenni’s father, who broke his hip and was undergoing rehabilitation in Waco.

In addition, Jenni hosted the grandchildren during spring break this year, and they all enjoyed Cameron Park Zoo, Mayborn Museum, Ridgewood Country Club and Urban Air.

“I figured out all the grandma stuff around to take the kids and let them enjoy when they’re here,” she said.

Mark and Jenni are planning to build a dock on the river below their property so the grandchildren can fish and have a place for a boat. Now, the young ones are content to ride with Pop — that’s what the grandkids call Mark — in the Polaris down the steep driveway to the water.

“When the kids and the grandkids are here, they love just exploring the property,” said Jenni, who is known as Gigi to the grandchildren. “We’ve got 23 acres here, and they love going down to the river at night with flashlights and seeing if they can find critters. They’ve camped down there before.”

The view from the patio overlooks the 3,192-acre Delmar Ranch in nearby Bosque County. Other neighbors have cows on their property, and Jenni said one of the grandchildren’s favorite activities is to stand on patio chairs and try to spot the cows through the trees and brush and foliage down below.

Mark and Jenni replaced the original pool — complete with 12-foot depths and a diving board — with a smaller infinity pool.

Kevin Hetherington of Trimmers Lawn Care and Irrigation did much of the exterior work, Mark said, including trees, landscape and hardscape, plumbing, a water well and irrigation.

They also tore down a gazebo that blocked part of the view. It was replaced by a pergola under which four deck chairs are perfectly positioned to take in as much of the view as possible.

“Last night, it was 98 [degrees]. It was cool enough, so we sat out here and watched the moon come up. It was unbelievable,” Mark said.

“It was a beautiful moon last night,” Jenni added. “It’s really been everything we dreamed of. It’s really cliché to say a dream come true, but it really has been a dream.”