When Kim and David Littlewood purchased a sprawling brick house in Regency Park, near Lake Waco, you might say they were coming home. Though they had not lived in the neighborhood before, they both grew up in Waco proper and shared two homes inside the city limits before moving to the suburbs when their daughter was in high school. But they longed to return to an older, established, wooded neighborhood in town. And that’s just what they found in a home tucked back from the street — a home they’ve admired from more than 20 years.

“We love Waco,” Kim said. “We love old homes and the privacy of large, old trees. And this house has all of that, plus it’s in a great neighborhood. It just seemed right. With some upgrading we were sure we could make it exactly what we wanted.”

So David, president of TFNB in McGregor, and Kim, a dyslexia specialist for Waco ISD, transformed a two-bedroom, two-bath house constructed in 1955 by noted local builder William A. Badger into a three-bedroom, four-bath home with plenty of living and entertaining space. But the couple didn’t take lightly the prospect of renovating a home with such history. 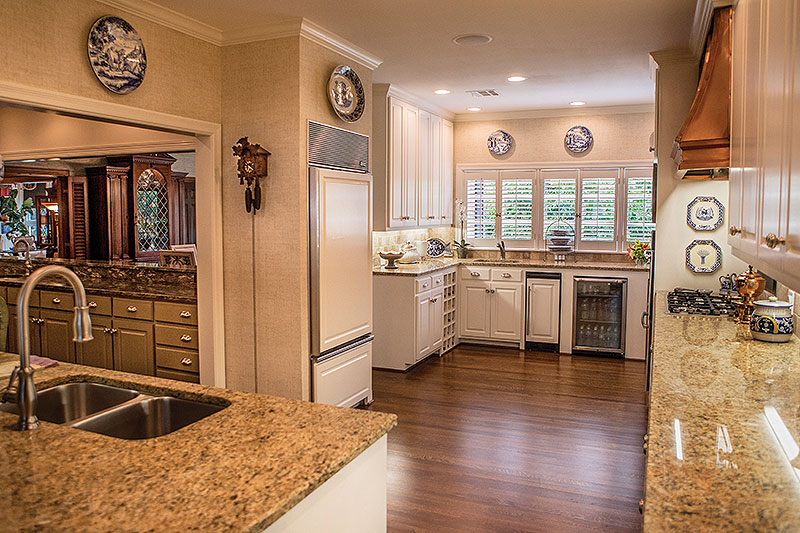 “This house was built impeccably, from every brick on the outside to imported wood accents on the inside,” David said. “We definitely wanted to preserve the craftsmanship of this home while giving it some modern features.”

It’s no wonder that what drew the Littlewoods to this home was the older, dark wood feel. Kim grew up in the Cottonland Castle on Austin Avenue, the cornerstone of Waco’s Castle Heights neighborhood near downtown. Constructed in the early 1900s of local limestone and sandstone and accented inside with imported Carrera marble and Honduran mahogany, Kim and her family called the castle home from 1969 to 1982. She fondly remembers the feeling of living in an older home with a story — a history — and the Badger home brought back that familiar feeling.

“This home made me feel like a little girl again,” she said. “It’s quaint, even a little bit mysterious, like the home where I grew up. It’s got character, and I love that.”

Part of the charm of this home for the Littlewoods is that the front door is not immediately visible from the street. In fact, one must wind around the driveway and find the front door amid shady trees and a lush garden. At the time Badger built the home for his family, it was the only house in the neighborhood, and it faced what is now Fish Pond Road. As the neighborhood developed around it, the result was a very private entrance.
Surrounded by live oaks, red oaks and cedar, the inside of the home has always had a dark, rich feel, which the Littlewoods wished to retain, for the most part. But Kim explains that they added light in certain areas to give the home a fresh look.

“We lightened what we could without taking away from the richness,” she said.

First they lightened the exterior brick, transforming it from the original pink to white. The whitewash effect was achieved through a process called a slurry coat, whereby the brick is coated with a watered-down mortar to give it a white appearance.

“I think it turned out really well, though it probably surprised the neighbors at first,” David said. “We did this because we planned to add to the house, and with an older home we knew we would not be able to match the brick perfectly. It was important to us that the old and new construction look seamless. The slurry was a way to blend the two so that our addition looks like part of the original home.”

Inside the front door, the entryway is bright and retains the original brick tile floors and built-in wooden bookshelves, replicas of those in the Oval Office of the White House.

To the left of the entryway are the original two bedrooms of the home, both retaining the distinctive hardwood floors. Because one of these rooms was intended to be the master suite, it is quite sizeable, with a floor-to-ceiling bay window and a view. Now the space provides the Littlewoods a comfortable guest suite for visitors.

The decor is traditional, and the Littlewoods, who met at Richfield High School and have been married for 33 years, placed some of their family heirlooms and other cherished furnishings in the guest room. End tables belonging to David’s maternal grandmother flank the bed, and the first “nice” wingback chair David and Kim bought together offers a place to sit. 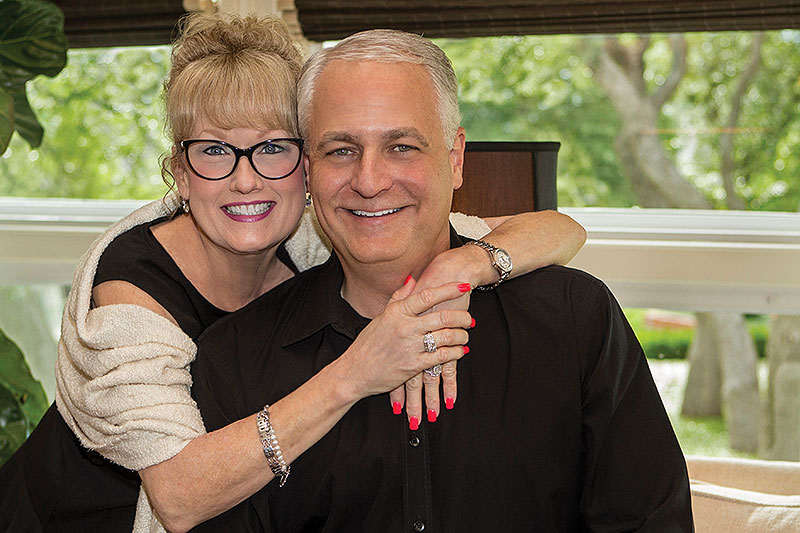 A previous owner recently updated the bathroom, but the Littlewoods added an Italian 1940s painted metal light fixture to make it their own. A second guest room has its own bathroom as well and houses another Italian light fixture.

The den is where the beauty and craftsmanship of the Littlewood’s home shines. The walls are adorned in rich black walnut picture-frame wood paneling, which Badger imported from Europe in the 1950s.

“We love this room,” Kim said. “It’s one of the most beautiful parts of the home. We would not have touched this wood for anything.”

Though the wood lends itself to a formal setting, the Littlewoods keep the space comfortable using eclectic furnishings, from a pair of vintage gold velvet wingbacks to a comfy oversized leather chair and ottoman to a sleek gray sofa. Gracing the walls is abstract artwork by local artist Richard Skurla, which David explains is Biblical in nature. And in a return to the traditional, a wooden secretary that belonged to David’s grandparents houses a collection of cut glass and crystal.

A marble fireplace adds warmth to the den, and guarding it is what Kim said is one of the few pieces procured from her childhood home. It’s a hand-painted fireplace screen featuring a wispy, almost ghostly, image of a young woman. Kim explained that the screen was in the breakfast room fireplace of the castle on Austin Avenue and that she grew up looking at it.

“There were hand-painted tiles of ships in a storm around it,” she said. “Very spooky.”
Just behind the den is a sunroom, which once served as a screened-in porch that didn’t get much use, Kim said. The Littlewoods added all new windows and brick floors, as well as floor-to-ceiling built-in wooden bookshelves and cabinets. Only one feature of the room remained the same: the skylights. Three large skylights with the original plantation shutters open and close with an old-fashioned hook kept in a corner of the otherwise modern room.

“We completely transformed this room into an extension of the den,” she said. “It’s got a great view, and we are in here a lot.”

The dining room features imported black walnut trim, which frames walls Kim wanted covered in elegant, natural grass-cloth wallpaper because “everyone’s home should have a room with grass wallpaper,” she said. A brass and crystal chandelier — original to the home — is a centerpiece.

To open up the home’s layout, the Littlewoods took out the wall separating the dining room and breakfast room and replaced it with a large granite countertop, connected to the walls.

“It feels like one room now,” David said, “which is great for entertaining. We can seat 10 in the dining room and more in the breakfast area, and it still feels like we’re all together.”

Off the breakfast room is what Kim calls the “man cave.” This room is decorated with lots of leather, rustic wood and horns. Next to the man cave is a full guest bathroom. 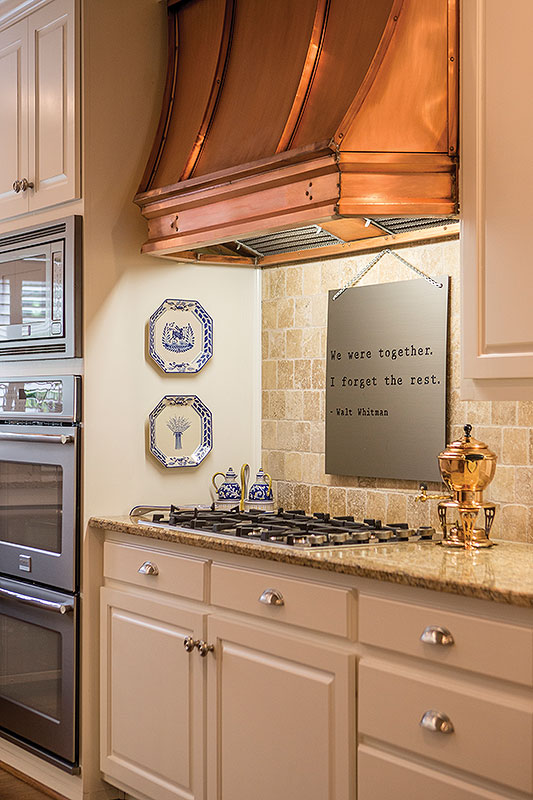 The kitchen was transformed into a true chef’s kitchen, complete with three sinks, three ovens, a Sub-Zero refrigerator and freezer, a drink cooler and lots and lots of counter space. The Littlewoods kept the stunning copper vent hood, which is original to the house and still a focal point of the kitchen.

“Anyone can gut a house,” Kim said, “but our goal was to honor the original craftsmanship of this home, and the vent hood is a perfect example of that.”

A completely new addition to the house, the master suite, located off the kitchen, seamlessly brings the home into the new millennium. Raised ceilings and multiple windows make the master bedroom light and airy. A combination of antique furniture and chic fabrics and textiles give the room a restful vibe while retaining the look and feel of an older home.

But there is nothing old-feeling about the master bathroom, which has all the amenities today’s homebuyers are looking for — two vanities, an open shower, a separate toilet room, a spacious walk-in closet and windows that provide natural light. 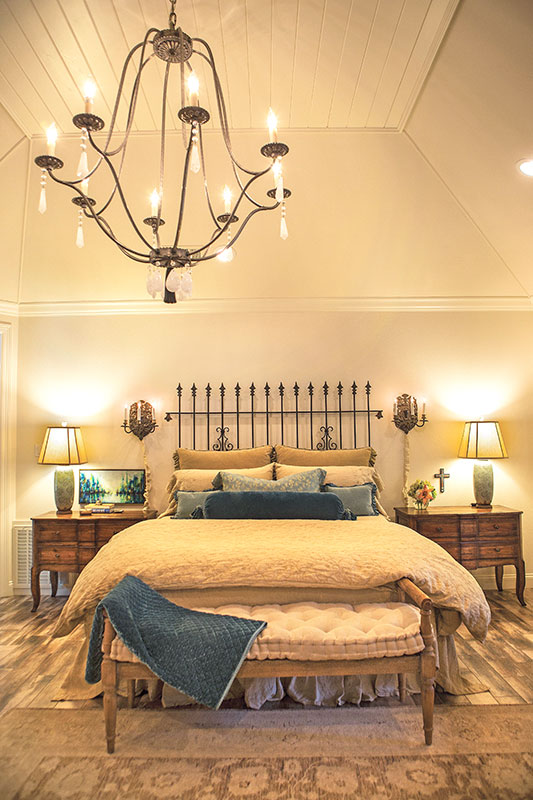 Off the master suite Kim wanted a screened-in porch where she could enjoy the beauty of the outdoors any time of year, rain or shine. The view is that of her lush garden under a canopy of hundred-year-old oaks with the swimming pool in the distance.

“I think what I love most about this house is the feeling of peace and privacy we have, right in the middle of town,” Kim said. “It’s something special. I think we’ll enjoy it for a long time.”