The life of a nurse can be full of memorable moments, whether it’s watching a mother give birth to her first child or walking alongside a family whose loved one is in hospice care, from the beginning of life to the end and at every step in between. We contacted seven nurses and asked them one simple question: What’s the most memorable moment during your time as a nurse? Some of the nurses have been in the field for nearly three decades, others for just a few years. They work in emergency rooms, in labor and delivery, for hospice organizations. They all love the work they do. 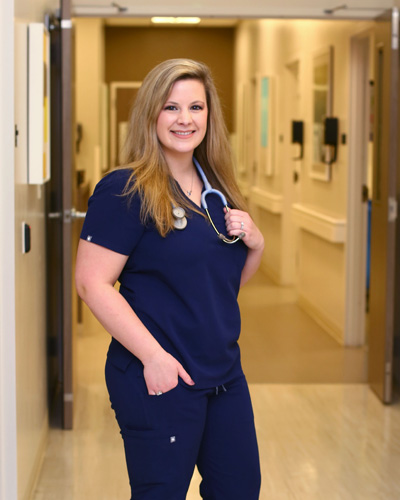 Shelby Potts is an RN with Premier ER & Urgent Care in Waco. She’s been a nurse for three years and also has a PRN position — working part-time or “as-needed” — with Waco Cardiology Cath Lab.

“It was Super Bowl Sunday, and I was at the YMCA. I was on the stair stepper, working out, watching ‘Grey’s Anatomy.’ There was a gentleman on one of the bikes in front of the stair steppers, and he collapsed. I took my headphones out, got off the stair stepper and walked over there. Of course, everyone kind of crowds around. My dad, [Erik Romanov], was on the treadmill just a few rows down. [The man] was starting to turn blue in the face. We moved the machine out of the way. We laid him on his back. Then there was a physician that worked out at the Y, and he came over. All within about 30 seconds he stopped breathing. He had no pulse. We performed CPR. And I remember in the midst of this — doing CPR, the physician was doing the rescue breath — I looked to my left, and there was a woman praying, which was totally just a God thing. After four rounds of CPR — and we had to shock him one time — we got him back. He just came to and was like, ‘What just happened?’ We asked him, ‘Do you know where you are?’ He’s like, ‘Yeah, I’m at the YMCA. What is going on?’ He had no clue what was happening. It was the craziest thing. We got him back before the EMS arrived. It was phenomenal.” 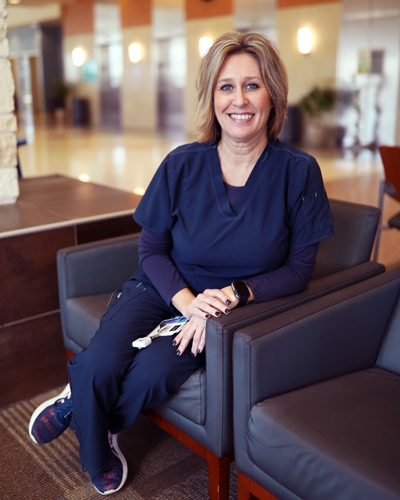 Lori Robb was born at Hillcrest, raised in Waco and has been a nurse for 25 1/2 years. She’s spent 23 of those years working in trauma. She is currently the regional director of trauma for Baylor Scott & White Medical Center – Hillcrest.

“When [the West explosion] happened, I was out of town. We were on the way home from [my daughter’s track] meet. It happened just before 8 o’clock at night. I’m about 40 minutes out still from getting home to Waco, and my phone starts ringing. As trauma leader, not only do I have the trauma program, but I have a lot of responsibility with our hospital’s disaster plan and response, with the regional disaster plan and response. And I’m on the state committee for trauma and emergency management. I fielded probably 20 phone calls in that 40-minute time frame. My best friend was riding with me, and they literally just dropped me off at the back door, and I didn’t go home until 9 o’clock the next morning.

There were a couple hundred people that were injured; we saw over 100. We had every ambulance stall full. We were triaging in the back of the ambulances. There were hundreds of [staff] that responded back to the hospital. You drill for those kinds of scenarios where you get a bunch of people, but you never know what it’s really like until it actually happens. And it actually happened, and it’s more intense than you can ever dream. And you feel really proud. You’re exhausted, but you feel really proud. It was truly a team effort from everybody.” 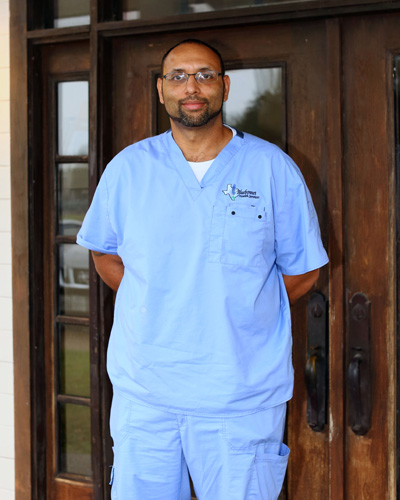 Lawrence Burnett is an RN at Bluebonnet Hospice, where he’s worked for five years, and has worked in the medical field “almost my entire life,” he said.

“This was in my first year [in hospice]. I had this little patient, and bless her heart, she didn’t have any family whatsoever. I remember she was passing, and she had nobody there with her. I kind of stayed with her until she passed. And I know it sounds silly, but that [was when I] really knew that this was the field of nursing that I wanted to be in. That was probably one of the most memorable moments because in other types of nursing I’ve done prior to that, I interacted with the patients, but it was mainly in and out, in and out, didn’t really build a good bond with them. But that’s when I really knew my calling as a nurse. Hospice is totally reverse from any other type of nursing that there is. You’re trying to make your patients better in every aspect in any other type of nursing, whereas I’m trying to keep my patients as comfortable as possible for whatever time they have left.” 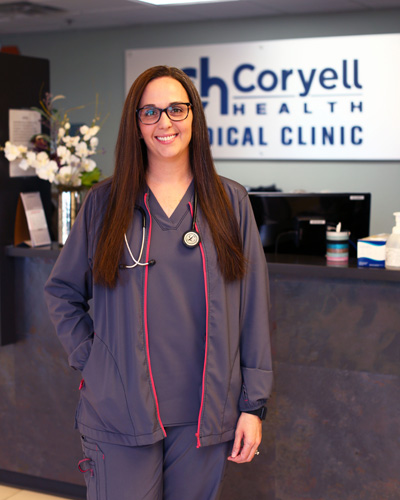 Lauren Shelton is an RN and care coordinator at Coryell Health in Gatesville. She’s been a nurse for 14 years.

“A lot of our success stories don’t just happen overnight. There’s one gentleman I have been working with for several years. When I first started working with him, he was one of our high-frequency [emergency room] utilizers. He has some medical issues, along with psychiatric issues, and he was just utilizing our ER more for primary care. So when I initially started working with him, he was in the ER literally 51 times that year. As we, as the care coordination team, worked with him, he has started accessing our primary care clinic. He comes in and gets his medications taken care of so that he’s compliant with those. And we’ve really just been able to educate him and engage him to where he’s not utilizing the ER for primary care. He’s actually coming to the clinic and seeing his primary care doctor and a specialist to manage his health. His ER visits decreased from 51 annually to one annually, and he has had no hospitalizations for his psychiatric disorders in the last year. He is very adamant about seeing his provider for any needs, and is a great success story for our program.” 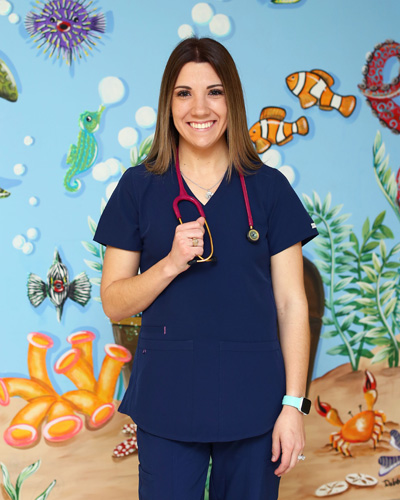 Tiffany Hrabal began her life as a NICU baby and is now a registered nurse at the neonatal intensive care unit at Baylor Scott & White Medical Center – Hillcrest, where she’s worked for a little more than 2 1/2 years. Her experience as a NICU patient “most definitely” led Hrabal to her current position working with Dr. Darrell Wheeler, who has known Hrabal, literally, her entire life.

“Being a NICU parent is a very stressful experience. One recently looked at me, and she hugged me and said, ‘Thank you so much for all that y’all do. Y’all were great. I really appreciate it.’ Her son had just been admitted. This was her first baby, and it was just a very stressful time. Appreciation from the parents is something that sticks out the most to me. He’s still trucking along. He’s still [in the NICU], but he’s well on his way to going home.
I was born 10 weeks early. I had a rare birth defect, fetal hydrops. I came out, and I wasn’t breathing. I wasn’t doing anything. I went like eight minutes without oxygen at the beginning of life before they got enough fluid off of my chest. I ended up with two or three chest tubes. I was intubated for a while. I spent two or three months in the NICU at Hillcrest. They were able to get me stable enough that they shipped me up to Cook [Children’s Medical Center in Fort Worth] because I had to have some surgery done. Then I was finally able to go home, and they told my mom, ‘We don’t really know what her outcome is going to be.’ They really didn’t give her much hope. They told her that they thought I would grow to be a full-grown adult but I would only have the mental capacity of a 6-year-old. They said take her home and love her and let God take care of the rest. God has definitely taken care of the rest, that’s for sure. It’s always been my dream to be able to work alongside the doctor that once saved my life, and now I am living my dream.” 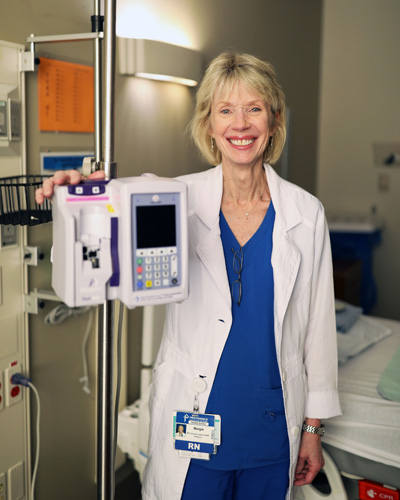 Margie Green has been a nurse since 2000 and has worked in hospice for the past 15 years. She’s with Community Healthcare of Texas, which, previous to this year, was known as Providence Hospice.

“It just sounds so morbid, but mostly I help somebody die with dignity. They have dignity in their pain and suffering. It just helps the family so much. That’s my memorable moment, but I’m blessed to have a lot of them. I was trying so hard to think of different people and different experiences — and some are funny. Laughing is good for us. [The patients] come to terms with their passing and, of course, you read each family different.
But one, in fact, my daughter married his grandson. And they were just getting to know us, and he went on hospice. I went out, and his daughter was there. I was talking, telling them all about hospice, And he turned to her and said, ‘Would you tell her that she doesn’t have to yell? I can hear her fine.’
I came to hospice when my dad [Woody Woodhal] went on it. He had lung cancer, and he died. And I just felt the Lord was calling me. I had selfishly thought, ‘Well, maybe I can bless some people in doing hospice.’ It’s the exact opposite. They all blessed me. I learn from their strength and their faith and their peace and their love for each other.” 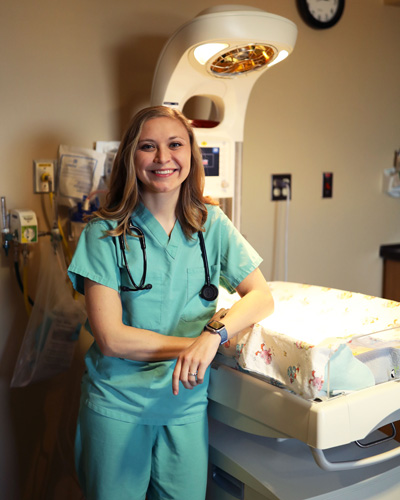 “I had just finished up my nurse residency program and was working nights on my own. My dad only takes call once in a blue moon since he’s now an administrator. I knew he’d be on call that weekend. Honestly, I was kind of dreading it, just because I know his standards for his kids are so high. I knew I had to know all the answers to every question he was going to have for me. I felt the need to prove myself. And all my co-workers were wanting to see the kind of interaction I’d have with him in the work environment. (Of course I call him Dad, because Dr. Becker is too foreign.) A patient comes in laboring. We give him the call, give him the updates. He comes up, and we actually deliver the baby together. That’s definitely a standout moment. I’ve only done one full-on delivery with him. I’m one of four siblings, and I’m the only one so far who has shared a passion for medicine with my dad. I love that we have that bond.”