When your entire career is defined by helping sick people get well, performing life-saving surgeries and building relationships with patients who depend on you for care, how can you possibly isolate just one story as your most memorable? “That’s an impossible question to answer!” Dr. Elizabeth Turnage responded when asked to choose one standout moment from her medical career, a sentiment that each of the other interviewees shared. Yet that’s exactly the challenge we gave her and seven other Waco-area medical professionals. Each of them reflected on their years of training, practice and patient care to offer one remarkable experience. These stories illustrate not only the power of modern medicine but also the great privilege and responsibility incumbent on those entrusted with our care and the reciprocal emotional impact of the doctor-patient relationship.

“I go back to what made me want to be a doctor in the first place. My mom worked for a local doctor here in Central Texas. I’d get off school in the afternoons and do my homework sitting in his office. When I was done with homework, I would make rounds with him in the hospital. I had my stethoscope before I had a driver’s license. And to put a stethoscope on and hear your first heart murmur as a 12-year-old, to have someone explain what that is — I can’t even begin to tell you what a memorable, impactful experience that [was for] me. He was a private practice physician in a small town, so if someone needed him, he was just a phone call away. That was always my ambition, to go to a place where my patients were a phone call away. So a combination of years of moments as a kid made the way I practice what it is here in Waco.” 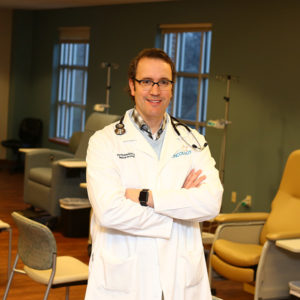 “What’s so memorable to me is the thoughtfulness and thankfulness of the patients, and it seems to be different to me in oncology. I’m repeatedly humbled when I see patients who are coming in to see me as a cancer doctor, facing life and death, really, and still thinking of others — not just family members, but they’re doing and saying kind things to me, our nursing staff, just thinking about others. And to me it’s been very impactful as a cancer doctor, and it’s really something that I didn’t look for or expect going into medicine. You think, ‘Gosh, if I were in that situation, I’d be worried about me,’ and that’s not what I’ve seen people with cancer do. That’s one of the reasons I love what I do.” 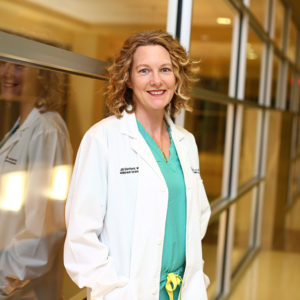 “Early in my training we still did overnight call every third night, and then we had to be at a meeting at 6:30 in the morning. I had a patient who was in the ICU for over a month and was completely stable: same vitals, same everything. We had vitals on the computer, but we had written charts, so you had to go to the bedside to read what happened. I had been up all night, and I was early pregnant, so I was exhausted. I had enough time to either walk across campus to the ICU to see this patient or to go get a coffee before our three-hour meeting. I looked on the computer and her vitals were exactly the same, and I was like, ‘I just can’t do it. I’m so tired, I need coffee. She’s fine, I’ve seen her every day.’ I took two steps toward Starbucks, and then I thought, ‘Danford, you can’t go and tell them that you saw her when you didn’t.’ So I went to her room — and she was gone. She had died overnight. But I was about to report that the patient was fine, status quo, and she was dead. The whole way back I just thought, it doesn’t matter how tired you are, it doesn’t matter how painful it is, it doesn’t matter if you’re pregnant or what is going on: you’ve got to be ethical. You’ve got to always do what you say you’re going to do.” 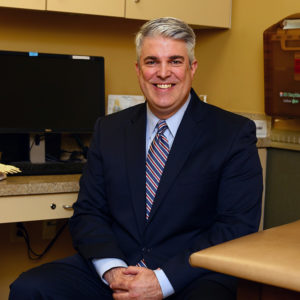 “We work with a lot of young athletes, and we all remember what it’s like to be a teenager. When your world kind of gets turned upside down — say you tear an ACL and you’re out for the season and things seem really bleak and it kind of feels like it’s over — I really love to encourage these kids and say, ‘It’s not over. This can be treated, and it’s good to be young. You’ve got a lot of life ahead of you.’ And even to encourage them and say, ‘You never know out of these circumstances what may happen — you may want to do medicine someday, you may want to do sports medicine someday.’ And sure enough, a couple of young people that I’ve done ACLs on years ago are now working in the medical field or working as physical therapists and rehabilitating young athletes. That’s maybe the most rewarding thing — to see young people [who] have a bad injury work to recover and move on. And to see them succeed beyond that, beyond high school, into college and going into the field of medicine — I love it.” 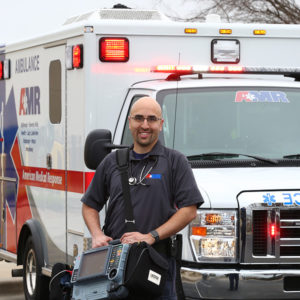 “We had a patient on a call who had been to the doctor several times before, and they couldn’t figure out why she kept passing out. She called 911 because she had passed out again that day and her episodes were happening more frequently. We assessed her on the scene and checked her vital signs. On the way to the hospital she felt like she was going to pass out again. Because we had her on the monitor, watching her heart rhythm, we were able to see exactly what was going on in her heart when she gets these spells. It was something you could only diagnose if it was happening right in front of you. We recorded the irregularity and printed it for the hospital. It was really neat on that call because we were able to present that information to the doctor at the hospital and it completely changed their care plan for her. Otherwise she was fairly healthy, so it was hard to detect what was wrong, but we were there at the right time and were able to help make a diagnosis.” 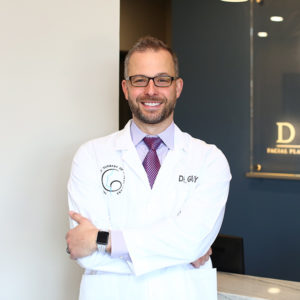 “One of my first rhinoplasties I did here in Waco was on a young man who came in and was having difficulty breathing through his nose but also didn’t like the appearance of his nose — it had been crooked, he had broken it. It was one of those things that I thought, ‘Hey, this is no big deal — the guy just wants his nose straightened out.’ So we did the surgery, and the day we took off the splint, this guy starts tearing up and crying and wants to hug me. It kind of took me for a loop: ‘Oh my gosh, wow.’ It was at that moment that you realize that some of the stuff we do, what kind of impact it has on people’s lives, even something that’s cosmetic. I know that seems trivial to some, but it can have a big emotional impact on someone. It’s one of those things that really makes you feel good: I can see it, he can see it, everybody can see it.” 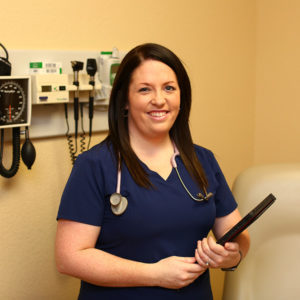 “June 26, 2018, I was assisting the [emergency department] nursing staff at the time of the explosion. When the explosion rattled the building, my initial thought was there was an incident at Fort Hood. I realized the explosion was on campus when I [saw] a large cloud of smoke coming from the back of the building. [Editor’s note: An explosion at a construction site area at Coryell Memorial Hospital in June 2018 killed three people and injured 13 others.] I knew remaining calm and getting everyone evacuated was my first priority. There were many patients and staff in the hospital, so I immediately ran to the inpatient area to ensure their safety. I met up with one of our hospital physicians and helped evacuate the first construction worker from the building. Several other construction workers [came] out of the rubble. Most of the men were burned, and we knew we needed to get them to a safe area out of the blazing sun. Typically a safe area would be inside the building with supplies, medical equipment and a controlled temperature. This wasn’t an option, so many people [worked] to find a safe place to set up a triage area. Many staff members ran back into the building to retrieve more supplies without even thinking about whether it was safe. The collaboration was not something that came from training, drills or written policy. It was survival, compassion and care for people.” 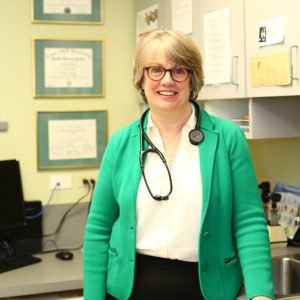 “A lady that I love dearly died a couple of months ago at nearly 80 years old. I’d been seeing her for 20 years, and when she first came, she felt terrible: everything hurt, it was hard to get up, it was hard to move. She’d seen several doctors and had been put on multiple medicines, including a couple of different narcotics. One of the things we know with narcotics is they make your pain fibers more sensitive; so when somebody’s on them for a little while, their pain really does increase, then they need them more — it’s a vicious cycle. We worked to find other ways to control her symptoms and get her off some of the medicines. She started going to water aerobics — she was 65 years old and got a bathing suit for the first time in 20 years. Over several months we got her off the narcotics, and this lady just blossomed. We went through 20 years of life together. She lost her husband and she ended up getting cancer, but up until the very end she made me laugh. In the summer she’d have on sandals, and she had each of her toenails painted a different color, so we always laughed at her toenails. She’s just a story of a tough lady with a good heart.”