David King bought a new faucet at Ikea. That turned into a bathroom makeover.

Over lunch at Torchy’s Tacos, he suggested a simple craft project for his wife, Elise. That evolved into a remodel of their entire kitchen.

“It escalated very quickly,” Elise said, laughing, about both of those projects.

David and Elise live in a condominium at Austin Avenue Flats. They have two bedrooms, two baths and a study spread over a little more than 1,000 square feet. They’ve been in their home for about a year and a half.

“We wanted to be downtown,” Elise said. “Coming from Austin, we loved the idea of being able to walk places. Walkability was a big thing for us.”

David and Elise were in Austin for graduate school at the University of Texas: masters’ degrees in architectural history and interior design for her; a doctorate of pharmacy for him. They both received undergraduate degrees from Baylor University.

David is the pharmacist manager inside Target, which is actually owned by CVS Pharmacy. Elise teaches interior design in the Family and Consumer Sciences department in the Robbins College of Health and Human Sciences at Baylor. She’s in her third year on the tenure track. They’ve been married for six years and live with their 6-year-old basset hound Lloyd. (Yes, he’s named after the famed architect Frank Lloyd Wright, “but Frank would have been too obvious,” David said.) 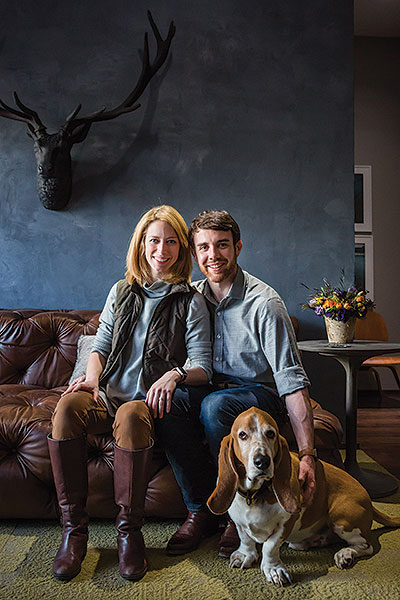 When the Kings were looking for a house, they wanted to purchase a condo in downtown Waco, but their options were somewhat limited. There were plenty of spaces for rent, but not many for purchase. They looked at another unit in Austin Avenue Flats, but it suddenly became unavailable, and they ended up buying from a fellow who needed out of the place quickly due to his upcoming wedding.

They liked that the building was constructed of concrete and steel and that it featured covered parking.

When the couple moved in, everything was taupe.

“It was everywhere. Literally. The walls. The ceiling,” Elise said.

“If it was a flat surface, it was painted brown,” David added.

They quickly changed that. They bought “gallons and gallons of gray paint,” but in a couple of different shades. One is off the shelf and the other is a custom mix. The living room area is a dark gray, but the color is softened by the material of the walls themselves. They’re covered in clay.

“I had seen it and said, ‘I want to do this,’” David said. “We had lived in so many units we couldn’t do anything to, and I love earthy, natural materials.”

As with all of the work in their home, Elise and David tackled this project themselves. It began with painting on a coat of white primer mixed with fine-grain sand. On their balcony that faces Fourth Street, David used a power mixer to combine “bags and bags” of clay and dye. Then they used a trowel to apply the clay to the wall in a layer about the thickness of a credit card. After the first layer dried — about a 24-hour process — another layer was added, and finally, they sprayed the wall with water and used another trowel to compress everything in place and remove any air bubbles.

“It took us a couple of weekends. You’re exhausted by the end of it,” Elise said. “It’s one of the more difficult things. We’ve done concrete countertops. We’ve done a lot of other things. The clay wall was the hardest.”

Elise was initially skeptical about the clay wall, but David pushed for it. And he’s not shy about standing up for the design elements he wants, even though he is married to an interior design professor.

David replied, “While I’m in the science field, a lot of my family is very artistic. I grew up with it.”

Elise said their biggest difference, aesthetically, is she tends to be “more simple with materials and colors, keep it a little cleaner,” while David, as he puts it, “could have a texture on every wall.”

For example, while David wanted an elaborate light fixture in the living room, Elise pushed for one with a more simple design — a large (more than 2 feet across and just about as tall) black bell-shaped pendant she bought from CB2, the more modern branch of Crate and Barrel.

“I fought her on the light, a little bit,” David said. “I couldn’t envision it. And I wanted something more ornate. Like she said, I’m more busy, and she’s more simple. I can’t imagine what I was envisioning up there now because it would have been way more busy.”

It was on a Christmas trip back from San Antonio that Elise purchased another large piece that commands attention: a painted, plaster stag head. It oversees the living room from its perch on the clay wall, above the couch.

“It’s from Restoration Hardware Outlet,” Elise said. “We were coming back from a holiday, and I said, ‘I’ll just run in. They’re having a sale.’ About 15 minutes later, I walked out with this thing.”

Then they had to worry about getting it home. The horns on the stag are about 4 feet wide, and they were traveling in Elise’s sedan.

“I figured out how to take it apart, thankfully. It was after Christmas, and the car was packed,” David said.

Elise said the stag and Lloyd shared the back seat on the rest of the drive home, “and Lloyd just glared at him.”

“We’ve gotten to the point where he, on certain things, doesn’t get it, but then he trusts me and most of the time it works out OK,” she said.

As for the large wall occupied by the stag, Elise said she didn’t want to simply hang a large, rectangular piece of art or — even worse — a big collection of smaller objects.

“The thought of poking a lot of holes into that wall with a lot of small pieces or covering it up. Neither one was very appealing,” she said. “Since the room itself is fairly long and narrow, I was worried that by having a large rectangular piece, it would actually enhance that feeling. Instead, I wanted something that felt bigger. I wanted you to be able to see through whatever it was, to some extent. Just not a solid piece of art or whatever.”

Her hesitation to add anything to the walls extends to the master bedroom, where a 10-foot-tall wall — gray, of course — looms over the couple’s bed. The wall is bare.
“That is by design,” Elise said. “I like the feeling of that big wall when you come in. To me, I like the feeling of walking in and having something that’s bold and massive. And with the scale of that wall, it’s calming.”

And David likes the wall, but for another reason.

“I work in a pharmacy, and there’s something everywhere. There are bottles and confusion and stuff everywhere. It’s nice to have just nothing there. Walk in and the lights are dim. It’s calming to us.”

The bedroom wall isn’t the only place Elise’s design background comes into play. In the kitchen, a pantry — gray with a white door — is aligned perfectly with the dining table, which juts out from the kitchen island, but is off-center. And those both are in line with the door leading to the small patio.

This has always bothered me, this pantry area,” said Elise, who describes herself as a bit of a perfectionist. “The kitchen, particularly when the cabinets were up there, just subdivided the whole space. When it was originally painted all the same khaki color, [the pantry] just sort of protruded out for no apparent reason. I wanted to isolate it, like, ‘This is the pantry.’ That’s why it’s painted a different color than the rest of the room, to try and identify it as something that’s unique and with its own purpose. And with the table, I thought it visually helped to reinforce and have something else aligned with it.” 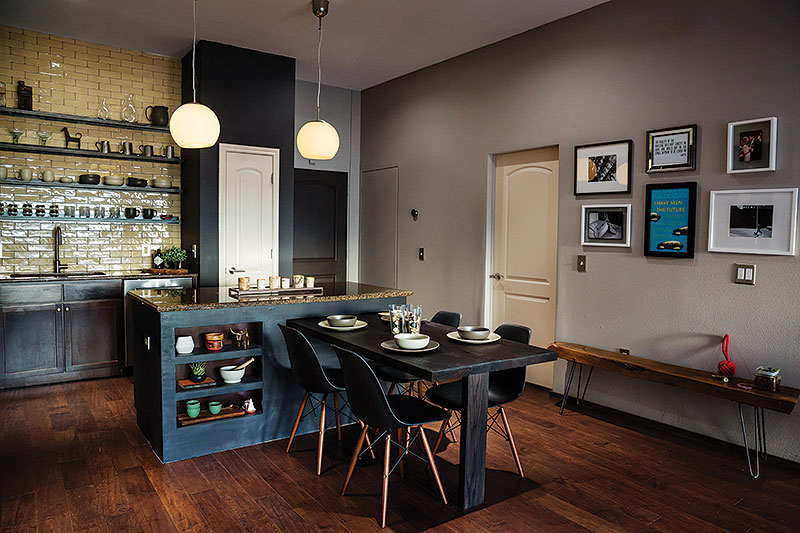 The couple built the table, which is nearly 5 feet long and almost 3 feet wide. It’s made from red oak, which they charred using a propane torch and finished with a coat of polyurethane. The table appears to emerge from an opening in the island, a design which echoes the three shelves next to it. The opening provides more structural support than if the table was flush with the island.

“The shelves are recessed slots, basically, [and] the table mimics that to some extent,” Elise said.

For their other project in the kitchen, the Kings had help from Cody Benton from Reckless Iron Works.

“When we tiled the kitchen walls we took out our upper cabinets, which had been closing in the space. We replaced them with floating steel shelves. I wanted a ‘blackened steel’ look, so we didn’t powder coat them. They’re more dimensional this way and have some variation in color,” Elise said.

David and Elise just finished redoing the guest bathroom, the project that began with the faucet from Ikea. It ended up including a new sink and cabinet as well as a freshly tiled floor and shower.

The master bath has remained largely untouched, they said, though David did add some under-counter lights that softly illuminate the floor along the cabinet. Similar lights adorn the three small shelves in the dining area as well as the cabinet tops in the kitchen.

While the Kings love their home, they make every effort to get outside and enjoy their neighborhood as well. David is a runner, and they both enjoy kayaking on the Brazos River. And they’re working to help build community, both downtown and in their building. Their immediate neighbors include Baylor students and faculty, some medical professionals, several attorneys and even a couple of families.

Within walking distance are places that weren’t even open when they first moved in.

“Dichotomy wasn’t here. The Hippodrome wasn’t re-opened,” Elise said. “It’s a completely different environment. During the day it was busy. But there’s much more of an after-5 environment now. You see cars and people milling about. In a year and a half, almost two, we’ve seen a big change, I think, particularly with the after-work crowd, people either coming here or living down here and going out and about and walking and enjoying what there is.”