You might have to be a longtime Wacoan to know there are lakeview homes in Windmill Hill, a neatly manicured West Waco subdivision of mostly patio homes that was established in the early 1970s. But there are just a few, tucked way back along the far edge on a street by the same name. And when one of them went on the market last year, Phil and Edana Croyle discovered everything they were looking for in a new house.

The retired cardiovascular surgeon and his wife, a former speech pathologist, said they are loving life as new grandparents and wanted an easy, more casual home with the space to welcome their growing family but that maintained a touch of elegance.

“We looked at a lot of homes with beautiful yards,” Edana said, “but we thought, ‘No yard.’ We definitely wanted to upsize to get a little more room, but we wanted to do that without having a big yard to take care of.” 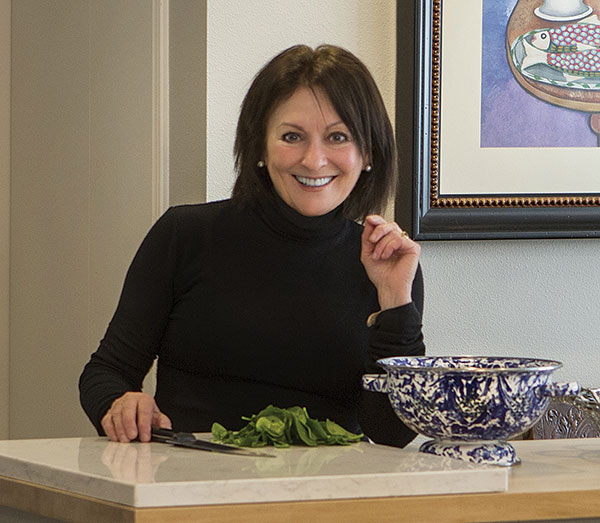 Set on a bluff overlooking Lake Waco, the Croyles found the perfect combination of a larger luxury lakeview home and easy maintenance, which they updated to make it even easier to maintain for an extended family of little children who like to run and play.

The Croyles have two daughters, Meredith and Mary. Meredith Dempsey, her husband, Peter, and their two children, Alex and Evie, recently moved to Waco from Germany — and renovated a house themselves, just off Lake Air Drive. Mary Farrell, her husband, Sean, and son, Cian, live in San Diego.

“We walked in and looked at the floor plan and the basic design of the house, and we thought, ‘This is pretty perfect,’” Edana said. “Upstairs, it’s got two bedrooms, two bathrooms and a big room for a playroom. The master bedroom is on the main floor, which is just the perfect setup for us.”

The traditional red brick house was built more than 30 years ago and has only had one other owner, so it was ready for a fresh, updated look. And Edana is no stranger to giving Waco homes a new look that fits her family’s personality and lifestyle. Over the years, they have made renovations — large and small — to homes on Lake Killarney Drive, Point Wood Circle in the Wood Lake subdivision and Sugar Creek Place in Woodway. Most recently, they called the Lake Air Tower their home but realized they needed something roomier when the grandchildren started arriving.

They bought the house in November 2015, started work in January 2016 and had moved in by March of that year.

“I thought, ‘What do we need to give the house a fresh look and make it more perfect for us?’” she said. “That’s when we came up with the idea to paint the brick white and add the stone wall.” 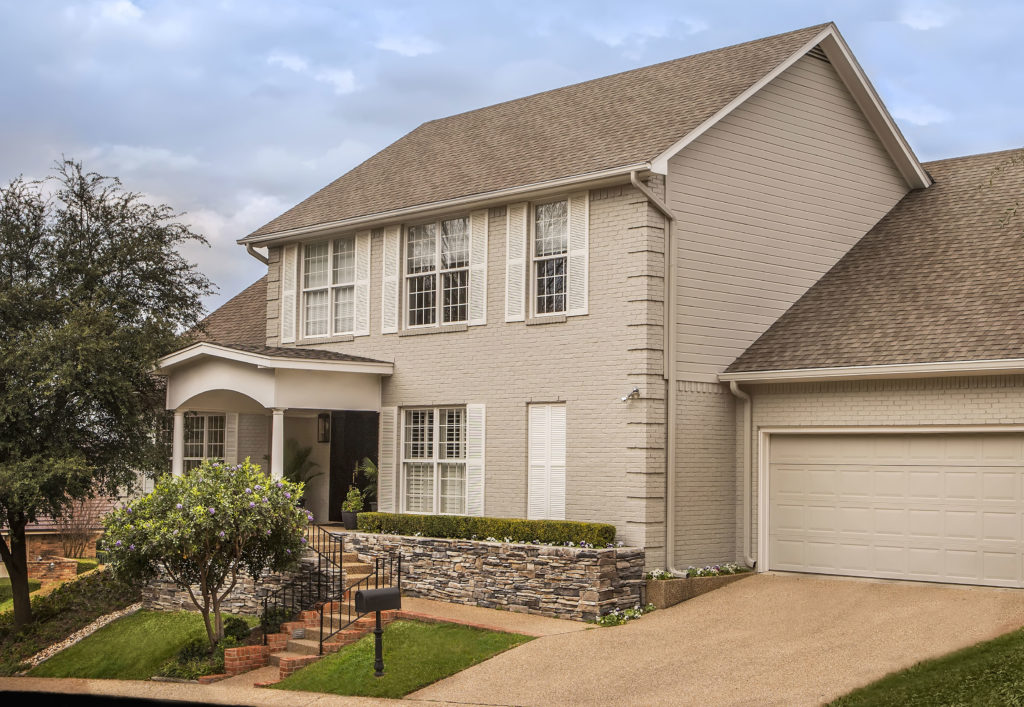 They ended up using a light shade of gray for the brick with white shutters. Along the bottom of the brick wall, wrapping around the front and side of the house, is a more modern-looking stone wall with lots of earthy texture. That and the paint — save for the red brick chimney — completely changed the view from the street.

“I just thought it would be cool to keep the red chimney,” Edana said, “as a sort of pop of color.”

At the top of the stairs leading to the front porch — remember, this home is on a bluff — is the shiniest black front door you’ve ever seen. And that’s by design, of course.

“The front door of a good friend has this beautiful look, and I knew it was something I wanted for our house,” she said.

Local painter Marlyn Whitney was commissioned with the job of applying the “Dutch Door Kit,” which is manufactured by Fine Paints of Europe and is available at an interiors store called Moxie in the River Oaks area of Houston. It’s a high-end enamel paint with a brilliant finish that is reminiscent of the doors in Holland, which are well-known for being beautiful and welcoming. Whitney described the process as “a challenge,” but the end result is quite distinguishable from your average front door.

Inside, the Croyles longed for casual elegance, open, not formal. They were looking for relaxed, beachy — or lakey, in this case — and perhaps a throwback to the days when they lived Galveston.

“I wanted casual, but luxurious,” Edana said. “I wanted that relaxed feeling you get looking out at the water but with touches of beautiful things, like a crystal chandelier.”

The front door leads right into the dining area, which leads to just about everything else, thanks to the way the Croyles opened up the floor plan by extending — almost to the ceiling — the entryways to each of the other rooms. They also opened a wall that separated the dining room and kitchen, so the lake is now visible from any angle of the downstairs common areas.

“We added molding throughout the main floor,” Phil said. “And we removed the ceiling fans from each room, which gives the feel of higher ceilings.”
New floors and countertops were next on the list.

“We wanted things that would really wear well,” Edana said. “We researched a lot and went with quartz countertops. I was thinking marble — everything I looked at and liked was marble. So we went for that marble look but with something not so high maintenance. We wanted something that was really carefree. You can set hot stuff on it, drip lemon juice, spill anything, and it’s no problem. We liked it so much, we put it in the master bathroom as well.”

The floors are a high-end vinyl laminate in Aspen Pine by Moduleo, which wears very well, Edana said.

To the left, off the dining room, is a living area that overlooks the lake through a picture window that extends nearly the entire length of the wall and offers a view from nearly anyplace downstairs. In the corner stands an armoire that the Croyles bought early in their marriage and couldn’t part with, even though it didn’t quite fit into any of the bedrooms. A bright white sofa and chairs doesn’t sound like the ideal situation for sticky fingers and afternoon art projects with the grandkids, but they are. 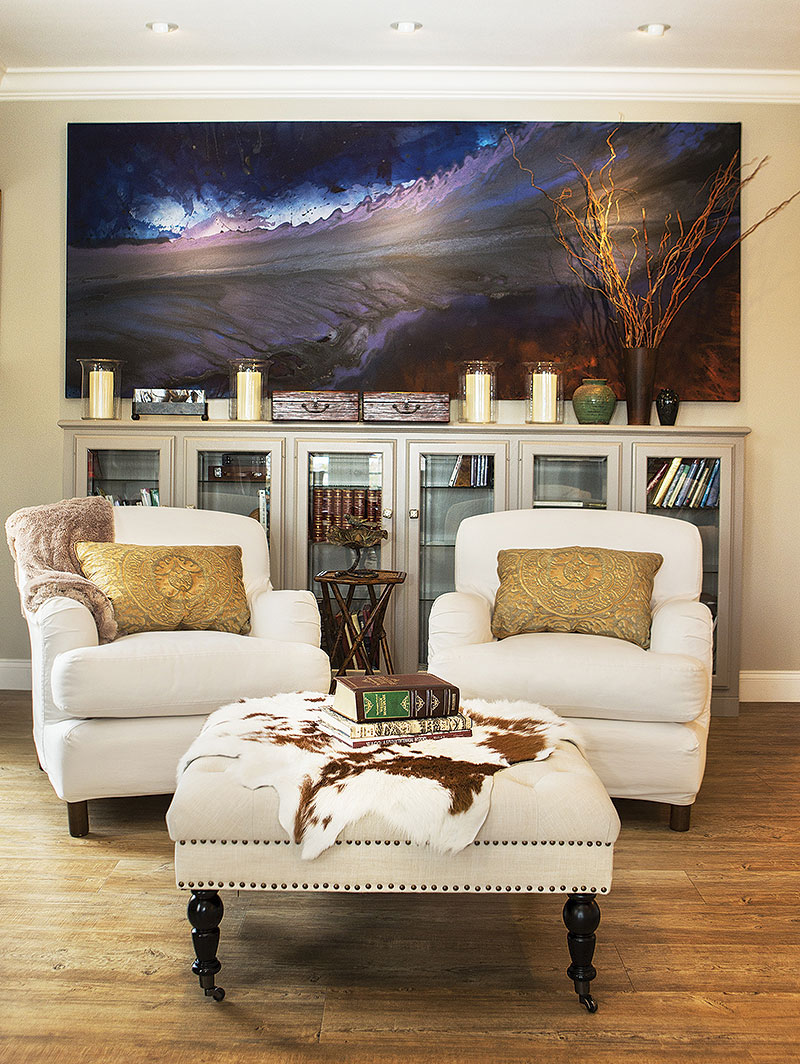 “All our white furniture is covered with washable slip covers,” Edana said. “You can spill on them or stain them and just throw them in the washer. I bought them online from Quatrine washable fabrics. They are so easy.”

Connected to the living room is an equally peaceful TV and fireplace room.

“One of the harder things they had to do was wire the TV through the masonry of the brick fireplace and chimney,” Phil said. “We kept the original fireplace and painted it. It’s a big fireplace and there’s no gas in Windmill Hill, so we converted it to electric.”

They moved the TV to make space for a built-in china cabinet turned bookshelf, which was repurposed from the dining room renovation.

“When we opened up the wall between the kitchen and dining area, they removed a bank of glass cabinets,” Phil said. “We kept it around and ended up using it as a bookcase in the TV room.”

The TV room opens up onto a wrap-around, partially covered patio with an electric fireplace that, of course, overlooks the lake. A large marble table is another repurposed element, which was once the serving top for that same china cabinet in the dining room. A wet bar — with a view — also sits off the TV room.

The walls throughout the house are bathed in Revere Pewter by Benjamin Moore, a light gray that calms and restores with its warm undertones. Paired with trim in Simply White, gray is the perfect backdrop for the couple’s extensive art collection.

The Croyles know what they like in the way of art — and it’s a diverse collection of various mediums purchased while traveling, gifted by friends and even created by their daughters. The centerpieces are two dramatic, abstract 9.5-by-4-foot paintings by Texas artist Joe Battle, which grace the walls of the living room and TV room. The living room also features a series of pieces that depict the four seasons, by French artist Sandra Jayat. These and other works of art collected through their travels seem to hold equal value to paintings and photographs by friends like Carol Crosthwait, Tommy Waggener, Brenda Marowitz and their daughters, if wall placement is telling.

The cabinetry throughout the house is painted in Galveston Gray by Benjamin Moore.

“We kept all the original cabinetry,” Edana said. “It was really nice and gave us some great stuff to work with in the cabinetry.”

Pewter-finish cabinet and drawer pulls in the dining room, kitchen and bathrooms are from Hobby Lobby, Edana said, but have that Anthropologie look.

The kitchen isn’t huge, but it’s plenty for two — and seems larger than it is because of the expansive view. It has a Jenn-Air stovetop and a substantial island, which the Croyles added. A large laundry and bonus storage room was made possible by a space that was once the dark room of the photographer who lived there.

The master bedroom is clean and white with warm wood accents, more art and a cozy electric fire feature on the wall. The master bathroom is spacious and features a luxurious corner shower and tile floors of Horizon Olympia Stone by Moduleo. The master closet incorporates an old dressing table that belonged to Edana’s aunt.

“It’s maybe 100 years [old],” she said. “Over that, we hung a mirror that also belonged to my aunt. When you look into the mirror, it reflects back into the mirror behind you and it looks like it goes on and on and on. I love the addition of a little chandelier above it.”

The stairway leading to the upstairs is lined with still more art and makes the trip to the second floor feel like anything from a vacation overseas to a trip down memory lane. 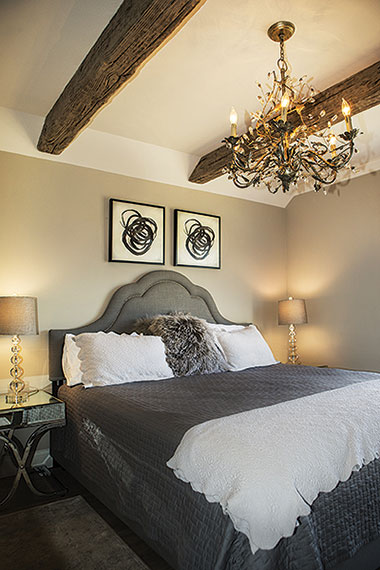 Two bedrooms, each with a full bathroom, provide ample space for guests and grandkids. One bedroom features an oil pastel by renowned Navajo artist R.C. Gorman and the other a tessellation created by daughter Meredith in a high school geometry class — each one seeming to hold equal value for the Croyles.

A third upstairs bedroom serves as a fanciful playroom and virtual wonderland for the grandkids. Designed for play — but with touches of elegant sparkle — cabinets of both new and vintage toys are only an arm’s length away from bringing a smile to the faces of little ones. And that’s a big part of why they chose the house.

“We just wanted a place that’s welcoming and easy,” Edana said, “and that’s what we’ve got.”