If planting a garden is believing in tomorrow, Susan DeWitt will be the first to say that her husband, Terry, is a true believer. While that might sound a bit existential for a guy who really just likes to take on a good challenge, the fruits of his labor in their ever-evolving garden have made life at the DeWitts’ both interesting and beautiful.

“I post pictures of flowers and these wonderful vegetables, and everybody says, ‘Oh, you have a green thumb,’ but, it’s Terry,” DeWitt said. “He’s the gardener and the one who takes on big projects. He loves a challenge. I love a little pot of flowers here and there, and he took it to a whole other level. He does that with everything in life.”

Whether it’s fishing in Alaska or brining and smoking a 22-pound ham, DeWitt said Terry, a private equity manager, is always up to the task.

“Sometimes it’s good, sometimes it’s not,” she laughed. “Terry likes being outdoors and working in the yard and has since I met him. He’s project-oriented and will research anything to death if needed. I just like flowers. So his interest in gardening worked out well for me.” It’s hard to say which season she likes best in the garden, said DeWitt, who works part time for the State Farm Insurance agency of Terry Strickland.

“Fall is so nice to get a break from the daily watering,” she said. “The humidity comes down, and it’s so nice and comfortable to entertain and dine outside, which we love. And spring is fun when our plants burst out into color after a dreary winter.”

But no matter the season, the DeWitts enjoy a panoramic view from a sun porch added in 2012 to take in the sacred outdoor space they created on the second of two lots in the Greenleaf neighborhood in Waco.

“The sun porch is where our swimming pool once was,” DeWitt said. “The pool needed updating, and once the kids left, a pool really didn’t make sense. So we filled it in and added this porch.”

The great room, constructed by The Alford Company, is functional and earthy with stained and stamped concrete floors and cedar beams. Floor-to-ceiling windows and glass doors give the feeling of being out in the garden before you’ve actually set foot in it. 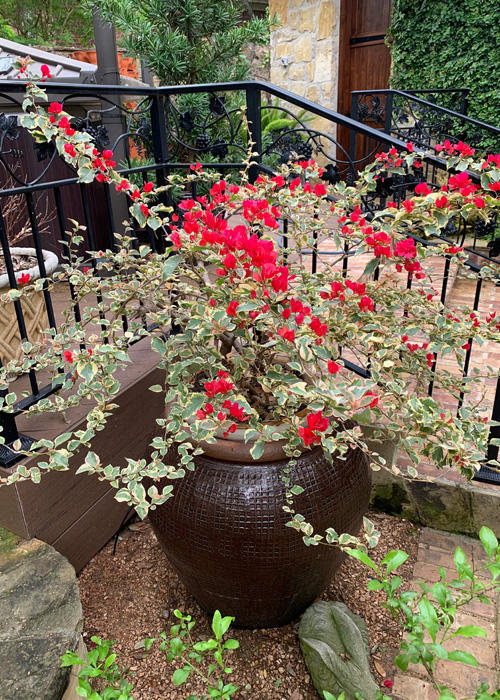 “There aren’t many days you can do it, but it’s great to open the doors and enjoy the fresh air,” DeWitt said. “This room is ideal for my indoor plants. It’s just the perfect light.”

The couple has always enjoyed the beauty of plants and flowers, but things really took off once they added on.

“I think the lemon trees came first,” DeWitt said. “Then heirloom tomatoes. They both are so delicious when home grown. It’s just a huge difference from store-bought fruits. Then Terry just decided, ‘I think I’ll try watermelon.’ And most of the time, he’s successful. I’ve learned everything I know about plants from Terry.”

As the harsh August sun beats down, DeWitt laments that the summer harvest season has passed and that the “ugliest” time in the garden is upon them.

“We had green beans, and we had so many tomatoes that I started making salsa,” she said. “But the tomatoes are gone. Once you start getting into the upper 90s for days in a row, the plants just stop flowering and kind of wither up.”

Even on the extra acreage of their urban neighborhood, there’s not enough natural garden space to grow all the things the DeWitts like to harvest and enjoy. So Terry researched and discovered the EarthBox self-watering container gardening system, which allows you to grow vegetables and plants on a patio or anywhere.

“We have about 23 of them,” DeWitt said. “They are large rectangular tubs, and you layer the soil and connect a hose to water from the bottom up. It keeps the bugs out and works so well. Terry likes to be totally organic. We don’t even spray for mosquitos.” 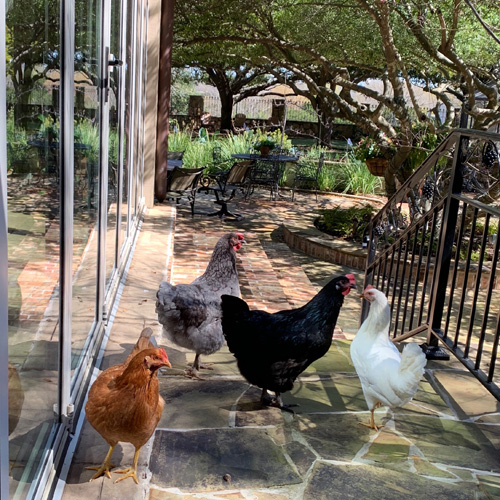 To keep with the aesthetics of the garden, Terry custom built attractive wooden cases to go around the tubs. The EarthBoxes are located in the center of the garden, the area where there is the most direct sunlight.

The 20-year-old Meyer lemon trees are planted in large terra-cotta-looking plastic pots on rollers to make transporting them to the greenhouse easy if the temperatures drop below freezing for more than a few days in a row.

“The lemons are green right now, but by about October they will start turning yellow,” DeWitt said. “They flower in the spring, and the blossoms have the most wonderful scent. Having the lemons on a self-watering system is really helpful because it cuts down on the constant daily watering.”

Another up-and-comer in the DeWitts’ garden would be the pear trees, which are trained and pruned in the Espalier method, forcing them to grow flat against a wall or a free-standing trellis. The fruit is taking shape right now on carefully manicured branches.

“I don’t like pears,” said DeWitt, “so I don’t really pay much attention to when the fruit will be ripe, but the trees are beautiful.”

A sizable glass greenhouse is mainly for storage, DeWitt said, but its height and unique shape make it a focal point in the garden. It was constructed by Texas Greenhouse Company in Fort Worth. 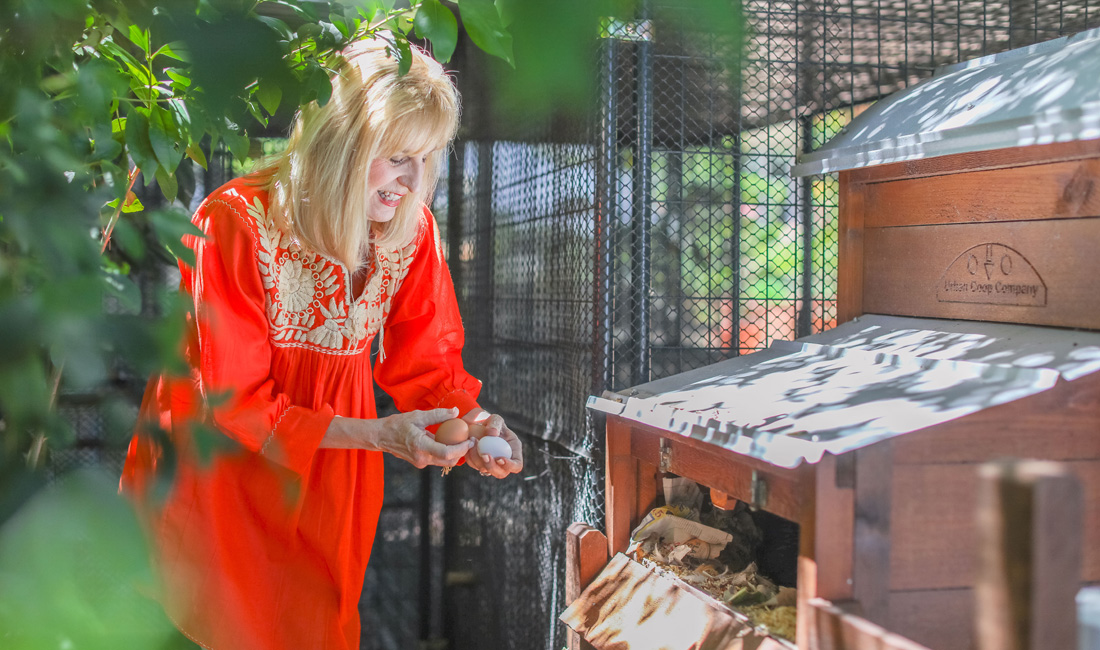 “It gets to be about 180 degrees in there during the summer,” she said. “It’s vented, and the vent system is attached to a thermostat so they open and close automatically with the temperature. We keep potting soil and supplies in the greenhouse, along with out-of-season plants that need protection from the cold.”

The joys of the DeWitts’ outdoor space goes far beyond the labors of the garden. It features a large hot tub with a Covana automated cover, purchased at Lake Air Pool Supply, which is perfect for soothing sore muscles after a day’s work. A fish pond, surrounded by colorful potted flowers and grasses, provides the peaceful sound of tranquil waters. And a stone bath house with outdoor shower makes a good place to clean up — and also looks like a little cottage in a secret garden.

Sharing their backyard garden with friends and family is one of the best uses of the space, DeWitt said. They have a fully functional outdoor kitchen, complete with Terry’s grill and smoker. Several seating areas provide room for both bigger gatherings and intimate conversations. They purchased the large dining table and chairs from The Casual Shop in Woodway. On chillier evenings, DeWitt said they enjoy lighting a fire in the stacked stone gas fireplace and gathering around it for warmth.

Make your way through a grove of oak trees, and you’ll find two novelties that are not often seen side-by-side: a seven-hole putting green and a chicken coop.

“We had this space that was too shaded to grow even grass, so we decided to put down turf — and thought why not make it a putting green,” DeWitt said.

The green was designed and installed by ForeverLawn Central Texas, located in Lorena. And no one loves running across the turf more than the DeWitts’ four chickens, as they take off for a flower bed full of dirt and bugs. 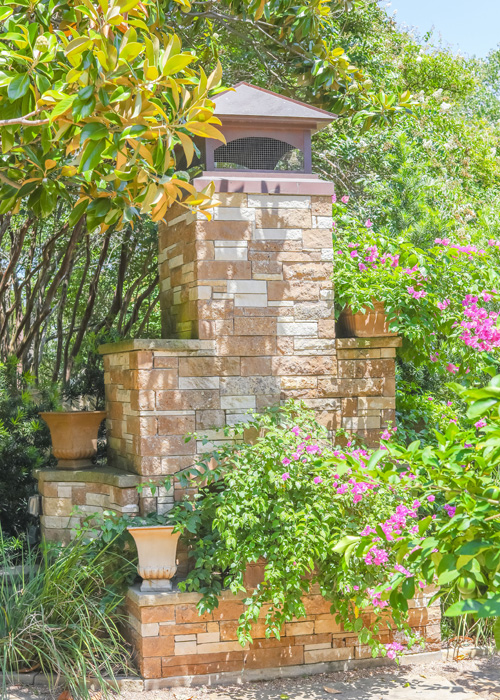 “The chickens were Terry’s deal,” DeWitt said. “I told him ‘You’re nuts,’ and now I just love them. I think they’re beautiful. They run around and dig and each lay about one egg a day. Each one lays a different color egg.”

Greenlife in Waco is the DeWitts’ go-to nursery for plants and flowers of all kinds — and also for landscaping. Greenlife owner Debby Boyd and her team laid the flagstone pathways that are found throughout the garden.

“A lot of my plants are really old,” DeWitt said. “For instance, this was a little croton plant that I grabbed at H-E-B to put on the table at Thanksgiving. I planted it because I just don’t throw anything away, and look at it now.”

DeWitt is sentimental like that. One of her favorite plants is a stunning Black Fang begonia that she’s had for years.

“My friend Jeanne Sadler gave me a cutting of her plant,” she said. “It’s a strange and unique type of begonia that shoots up these incredible pink flowers every spring.”

Nandina shrubs, elephant ear plants and native grasses fill in spaces around the garden, which is closed in by a Gatesville stone wall. An arbor covered in trailing vines leads to a heavy ornamental wrought iron gate that takes you to the front yard of the house. But why would anyone want to leave a place so full of life’s pleasures?