When Larry Groth joined the city of Waco as city engineer in the early 1980s, he would often find himself working past the normal 5 o’clock quitting time. On the days he left his office in City Hall in the early evening hours, he would walk to the parking lot, and his was the only car in sight — not only in the city parking lot, but in any parking lot, as far as he could see. No cars, no other people, no nothing. Just empty buildings. Some closed for the day, others shut down for years.

How times have changed. Downtown Waco is bustling and even more so on the first Friday of every month, when a couple of dozen businesses in the area stay open late and offer all sorts of incentives to draw folks into their shops and onto the downtown streets. 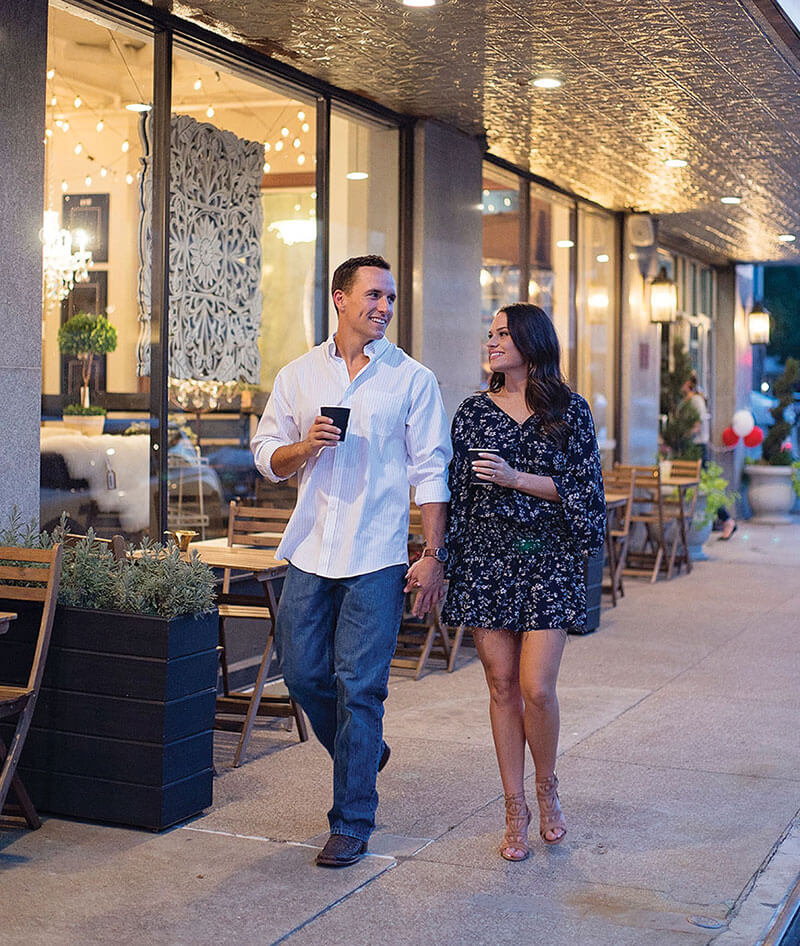 Ditch the car for the evening and enjoy the scenery downtown by walking to the different First Friday destinations.

First Friday Waco began in the spring of 2013, the brainchild of Peter and Summer Ellis, who own the Praetorian building at 601 Franklin Avenue. The building is home to Interior Glow, Anthem Studios, Bru Artisan Coffee Works and Summer Ellis Bijouterie, the showroom for Summer Ellis’ jewelry line.

“We had noticed after living in downtown, there wasn’t a lot of continuity between businesses,” Peter Ellis said. “We wanted to link arm in arm with fellow merchants” in an effort to bring more people to the downtown area. 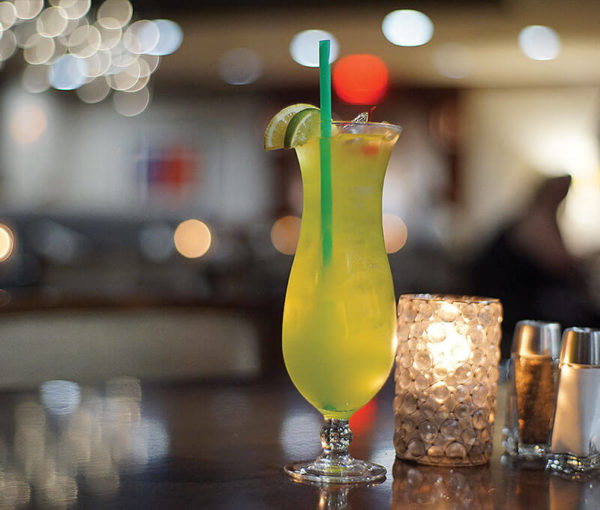 Food, drinks and music are just a few reasons to visit Downtown Waco for First Friday, whether it’s appetizers at Papillon Antiques, the “Mean Green” tropical rum cocktail at Brazos Grille in the Hilton or mellow tunes by Travis Tarver (shown below) at Interior Glow.

“We talked to other merchants, neighbors, residents, the chamber, other groups,” Ellis said. “There had been efforts at block parties, things like that, but none of them had really stuck. We wanted to give people a reason to see downtown as a destination and not just to go to Ninfa’s or another particular location.”

Ellis said that on the night he and Summer opened Anthem Studios about 300 people attended, so the potential was there. They decided to parlay that into an event that would also benefit other downtown businesses. Thus First Friday began, with Barnett’s Public House, the Waco Hilton, Papillon Antiques and a handful of others who “bought in from the beginning,” Ellis said. They committed to at least six months of First Fridays, hoping to catch the Baylor crowd before summer break and carrying momentum into the fall. Other merchants slowly came on board, with 10 or 12 taking part in those first few months, and now, more than two dozen businesses are part of First Friday. 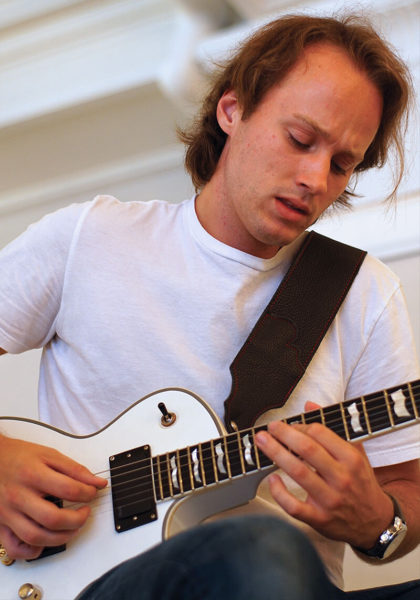 “First Friday always brings a nice flow of business in for us. We always offer some food and beverage pairing, a little bit of wine or beer that pairs with something we sell or focuses on upcoming cooking classes,” said Karyn Miller Brooks, owner of Gourmet Gallery at 502 Austin Avenue. “We really like to have local artists and artisans in, like Jonathan Homesley who makes our cutting boards. He makes cool cutting boards with a turquoise inlay. And Jerry Haynes, the fellow who makes ice cream scoop handles. They’re beautiful scoops that are green and gold. Last time, we had two chefs in, both local people. Next time, Dion Grisby will be here. He’s a Waco High student, and we’ll have some of his postcards here.”

The Waco Hippodrome offers trivia night for First Friday revelers, said Carina Yebra, who handles marketing and community relations for the theater. The trivia usually is themed around an event taking place at the Hippodrome. In September, for example, trivia questions centered around music from The Beatles and Michael Jackson, as well as tunes from the 1970s, ’80s and ’90s. On the Hippodrome stage during September’s First Friday was Yesterday, a Beatles tribute band, and a Michael Jackson tribute show is scheduled for October 31. 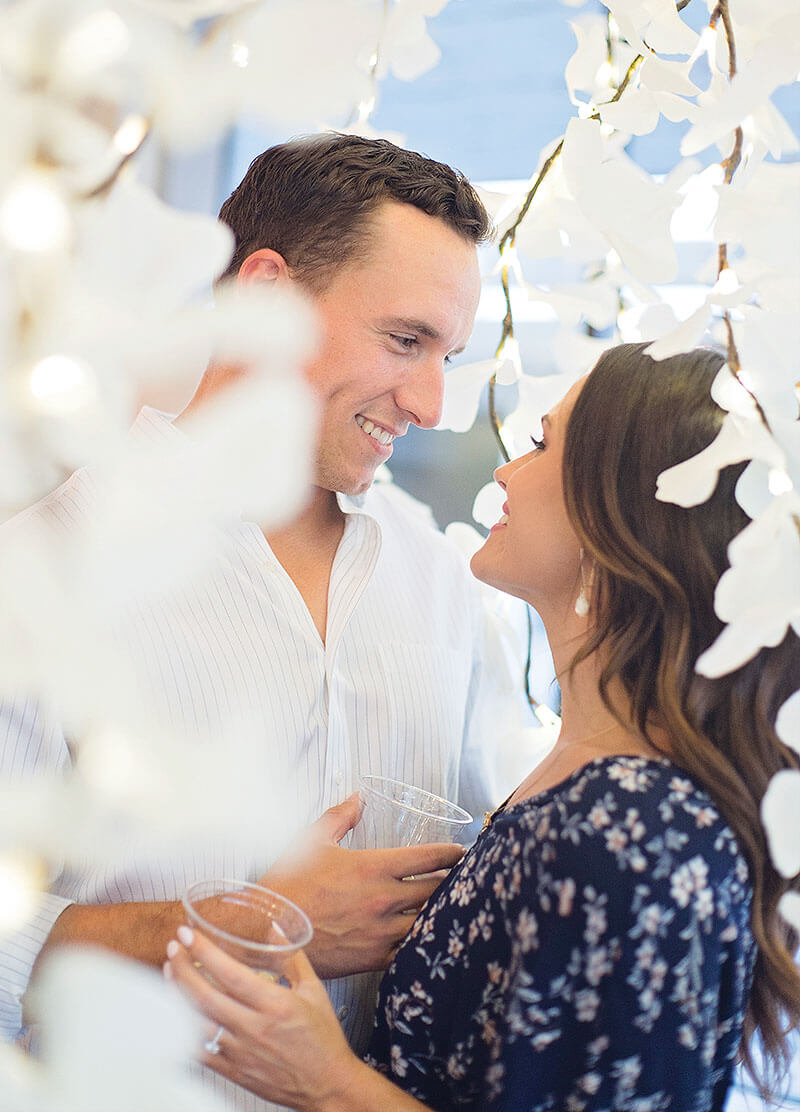 First Fridays make for a fun date night or a perfect girls’ night out. At the Praetorian building you can shop for exquisite home decor at Interior Glow and grab a cup of artisan coffee at Bru.

It’s been a big hit,” Yebra said. “We’ve had to turn people away” because the bar and dining area was full of folks taking part in the trivia contest.

The space at 712 Austin Avenue was buzzing during September’s First Friday event. It happened to be the closing night of the “Waco 52” exhibit, a collection of 52 pieces of art created by artists in and around Waco. In May, the exhibit was on display in the rotunda of the Texas State Capitol in Austin, and the pieces of art were also made into a set of playing cards. On hand at the event was Rebekah Hagman, who has christened the building Cultivate 7twelve but is keeping the focus on art. 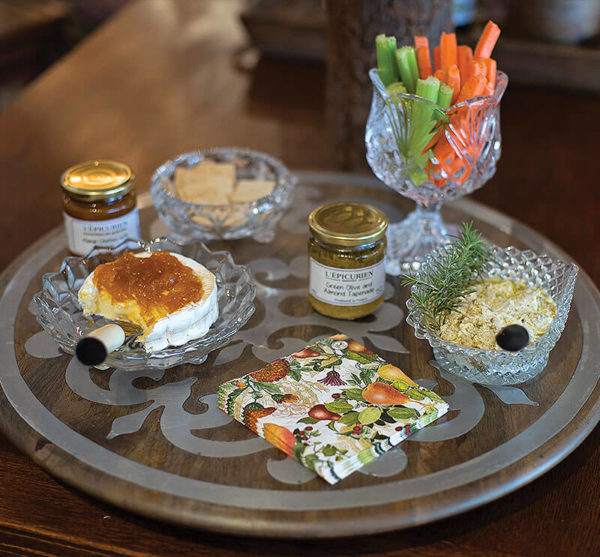 Papillon Antiques offers wine and appetizers, such as brie, spreads and crackers, for First Friday as people browse through the store.

“We’ll have our first exhibit opening on October 6, called ‘Transformation.’ Local artists have submitted work based on the concept of transformation and how they interpret it,” she said.

Hagman, who moved to Waco from California with her husband, Jeremy, in July, wants “to cultivate a space for the creative community of Waco, where artists can explore art and do art upstairs. And we want Wacoans to see what is produced in our city.” 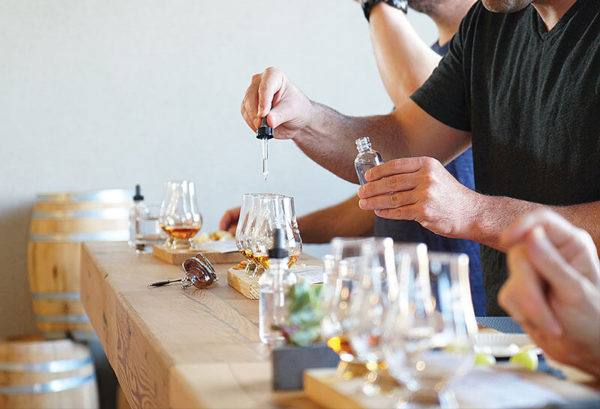 Try out new things while you’re out on the town. While most people think of pairing wine and cheese, the folks at Balcones Distilling offered a whisky and cheese pairing for September’s First Friday.

The Waco Hilton sees steady traffic on First Fridays, as it offers food and drink specials as well as live music in the lobby bar. In September, tunes were provided by longtime Waco musicians Greg Bashara on saxophone and Evan Klaras on guitar. 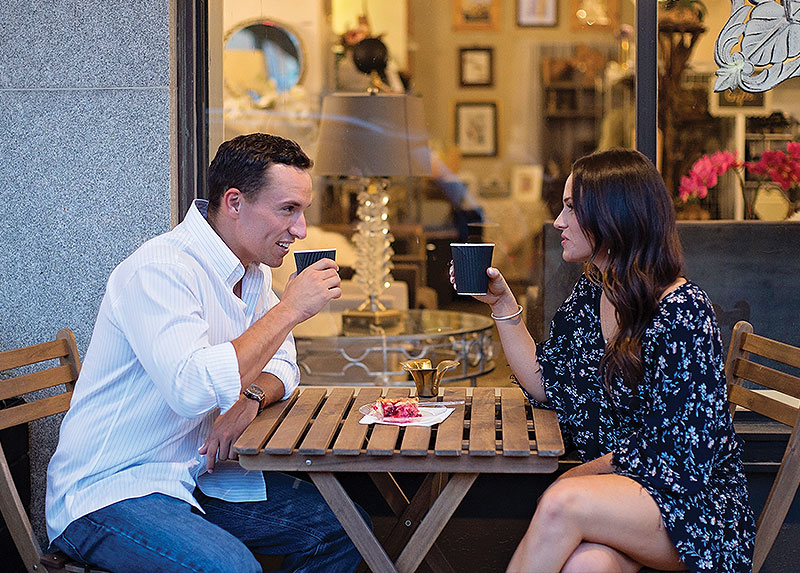 “We try hard to be involved with the community. We’ll have a local food truck or work with someone local. We’re open to families, not just adults,” she said.

Balcones offered whiskey slushies the past couple of First Fridays, “and they were a very popular event. We were very busy. We’ll probably do those again in the spring,” Fergusson said. In September, Balcones paired samples with cheese from Brazos Valley Cheese.

If you bought a flight [of whiskey] for $10, you got a cheese pairing for free. It’s really cool,” Fergusson said.

Ellis said downtown traffic has increased by about a thousand people each First Friday, and “that’s a conservative number. I wouldn’t be surprised if it’s much more than that.”

Ellis charges each participating merchant a small fee to help cover the costs of printing, marketing and advertising, and what he collects covers about half of what he spends. Thus, First Friday is looking for sponsors. Even businesses outside of the downtown corridor can help. Though those merchants wouldn’t be listed on the map printed on postcards and banners, they would still be listed as a Friend of First Friday. 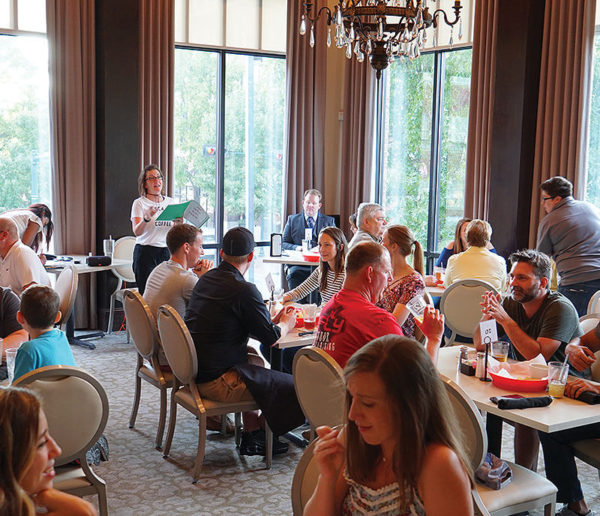 The Waco Hippodrome hosts a night of friendly competition with their well-attended Trivia Nights for First Friday. The theme often relates to an upcoming show, like September’s Beatles tribute concert. Satisfy your hunger with a dish from the Hippodrome menu such as a hamburger topped with a fried egg.

Ellis also said that as the event grows, he would like to see more businesses expand their hours on each First Friday. He hopes that more live music and other arts will become part of the scene and that foot traffic will increase enough where some downtown streets will need to be temporarily blocked off.

“There are lots of opportunities for artists and musicians to jump in with downtown,” he said. “First Friday is still in its infancy, in a sense. It’s going to continue to snowball forward.”

View this article on the digital edition