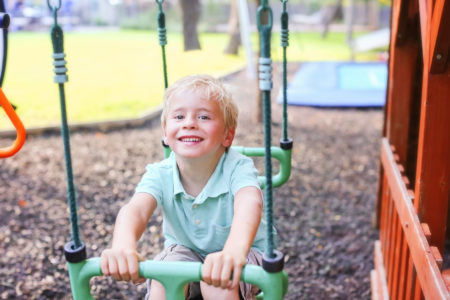 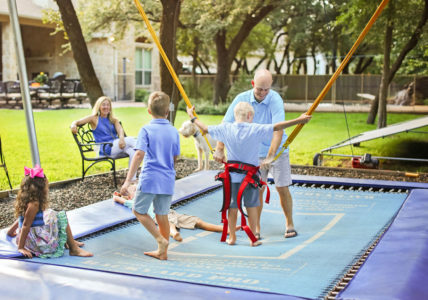 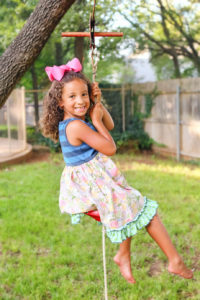 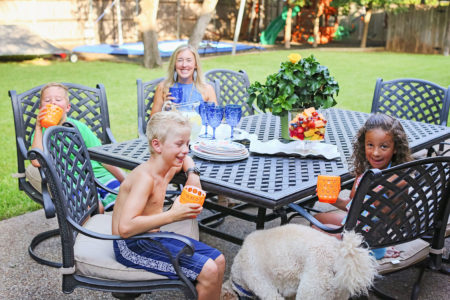 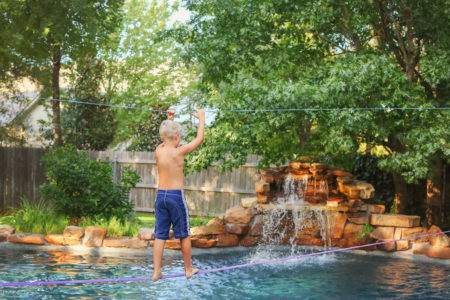 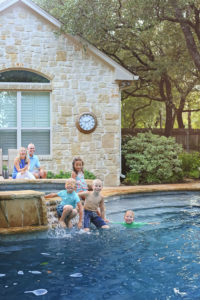 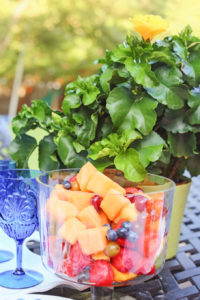 If a kid were to dream up their perfect backyard, it might look a lot like the Conner family’s. Catherine and Chad Conner have created pure backyard bliss for their four young, active children.

The Conners have one girl, Stella, 5, and three boys, Caden, 6, Grayson, 8, and Maddox, 10. The kids can be found on any given afternoon flying through the air on the bungee trampoline, jumping off the diving board into the pool, climbing on the playset, pretending in the fort, racing down the zip line or testing their balance on the slackline, which also goes out over the pool so they can fall off into the water.

The bungee trampoline is by far the most unique feature of this backyard. Inspired by similar setups in malls, Chad and his father built the structure, including the poles, harness and a hoist.

The Backyard Pro brand trampoline sits in the ground so the top is flush with the yard. And it’s not just for kids, either. The Conners host a variety of parties at their place, and Chad said adults probably enjoy the bungee trampoline even more than the children.

The backyard was a blank canvas of merely grass and trees when they purchased their home in 2010. Catherine said the trampoline was their very first purchase.
“He bought it before we even had any furniture,” she said with a laugh.

At that time, both Catherine and Chad had recently finished their residency training — Catherine is a pediatrician and Chad an orthopedic surgeon — and had decided to settle down in Waco. Chad’s background in gymnastics is what drove him to buy the trampoline first. Catherine knew she wanted a pool, but it wasn’t until 2013 when they had Aquanauts build it.

The boys were ages 6, 4 and 2 at the time. Just the logistics of getting the kids at that age packed and out the door for a pool day or other outing was enough of an impetus for Catherine.

“We needed it because I had three boys who had to burn some energy,” she said. “It was too hot to go outside, but they were running me crazy inside.”

It was around this time that Catherine and Chad began thinking of adding to the family again.

“After we had two boys, I really wanted a girl,” Catherine said. “But I wasn’t sure if I wanted to get pregnant again or if we wanted to adopt a girl. I got pregnant with Caden, and I was like ‘OK we’re done. No more boys.’ It wasn’t until Caden was about 2 that we started really thinking about adoption. We went through foster training, and then we got Stella in April of 2015 when she came to live with us. And then in May of 2016 we adopted her.

Another part of the family is their adorable dog, Tucker, who can be seen playing right alongside the kids. He’s a three-year-old multigenerational Australian labradoodle.

“It’s funny because it seems like the kids and him have similar personalities and energy levels,” Catherine said. “Our neighbor made a comment one time that he was the perfect dog for our family. He just adds to the excitement and energy level.”

When the crew dug the hole for the pool in 2013, the Conners had them dig one for the trampoline as well. It was then that Chad and his dad really got to work creating the fantastic contraption that stands today. They used large wooden beams to create the ledge for the trampoline to sit flush with the ground. Once it was in the ground, they put the poles up and built the whole bungee harness and everything.

“We did plenty of research online as well as the mall,” Chad said. The mall bungee trampolines were the original inspiration, but the Conners’ device is much, much larger.

Next, came the zip line and then a slackline over the pool.

“Originally we had it between two trees in the yard, but then Chad put it over the pool for fun. The boys loved it there, so it stayed,” Catherine said.

The Conners try to share the joys of their backyard whenever they can.

“We host different parties here for their soccer parties or with our lifegroup at church,” Catherine said. “We feel like God has blessed us with this, and we like to share it with others. We’ve actually had friends joke that we should do a birthday party business and rent out our backyard. You can’t get bored here, that’s for sure.”

The kids — and adults — all line up for the bungee trampoline first thing, the Conners said.

“They like to go high, and Maddox is always doing flips on it,” Catherine said. “Chad will pull their legs down and then let them go, and they go really high. They call it being launched into space.”