You’ve seen this episode on HGTV before: “We were just going to redo the kitchen and a couple of bathrooms.”

Susannah Schorlemer and her husband, David, moved to Waco from Houston in 2017. They fell in love with the town during their visits to see their oldest daughter, Blake, who was attending Baylor University. Blake has since graduated and now teaches at Live Oak Classical School. Her two younger sisters, Mary Frances and Louisa, go to Baylor now. The youngest sibling, Will, goes to Live Oak — he was actually in Blake’s Logic class last year. David is the chief financial officer for Basic Energy Services, an oil and natural gas company based in Fort Worth.

The Schorlemers home was built during the Great Depression in 1932. It was originally owned by the Walker family, and while researching the home’s history, Schorlemer discovered she had a connection to it through a friend from Houston. 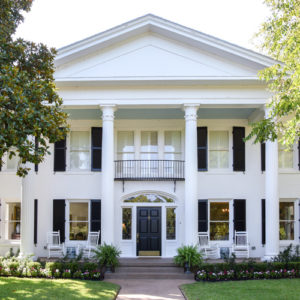 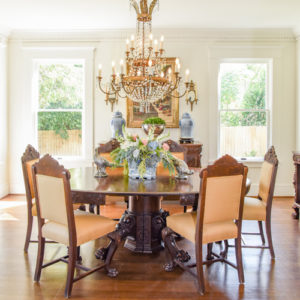 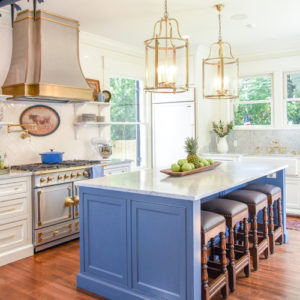 “I found an article in an old Waco newspaper that announced Betty Walker of Waco married Preston Moore, and I knew that to be my Houston friend’s parents,” she said. “I called my friend and asked her if her mother was from Waco because I think we just bought her childhood home. [Her mother] grew up in this house and rode her horse in Cameron Park every day before school. Her mother is 84 now and lives in Houston.”

The home’s architect was T. Brooks Pearson, who partnered with Waco architect Milton W. Scott to design the historic Waco High School. It’s a three-story Greek Revival with a white brick exterior, a symmetrical front facade featuring lots of single-hung windows and a grand porched entry with columns and a pediment, which gives the home its iconic temple-like appearance.

“We love old homes. We’ve restored several homes over the years, so it was fun to get a beauty like this Greek Revival,” Schorlemer said. “When we bought the home, we didn’t think that it needed a lot of work. We were just going to do some aesthetic things. Then when we decided to do that third floor, it changed everything.”

Initially a two-story, the Schorlemers decided to turn the home’s attic into a livable third floor. This required shoring up the walls and adding additional support for the floor as well as extending the staircase to access the third level.

“That revealed some plumbing things, some electrical, so we ended up re-plumbing and redoing all the electrical — doing way more than we anticipated,” Schorlemer said.

For the renovations, the Schorlemers worked with contractor Tony Lueck from Riesel, and throughout the process, they worked to remain true to the character and architectural elements of the home. One example of this dedication is in the intricacies of the new staircase. Johnny Hamel, another local contractor, completed the trim and carpentry for the staircase, which has elaborate details that seamlessly match the home’s original ones: custom handrails and balusters, dark-stained hardwood treads and dropped newel posts. Rather than just a conventional smooth ceiling, the underside of the staircase, which can be seen from the first and second floors, is embellished with paneling that mimics the wainscoting.

The third floor now has a small seating area with two twin bed nooks — perfect for the daughters’ friends when they stay over or just for use as a casual reading spot. They also added two bedrooms and two three-piece bathrooms. Blake currently lives in one of the rooms.

On the second floor is the master suite and two more bedrooms, one of which is Will’s. The Schorlemers reconfigured the master suite by flipping the bedroom and the bathroom. The bathroom was at the front of the house and now is at the back. The tile in the bathroom (and any other areas that were redone) was installed by tile setter Kyle Elwood and purchased through Daltile, but it actually comes from her parents’ ceramic tile factories in central Mexico.

Before starting his tile business, Schorlemer’s father was a builder. The two of them are currently working together to remodel and flip a house on Gorman Avenue. 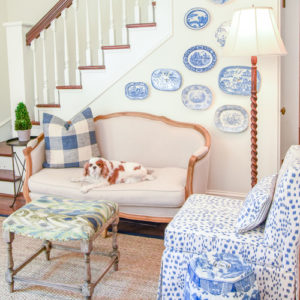 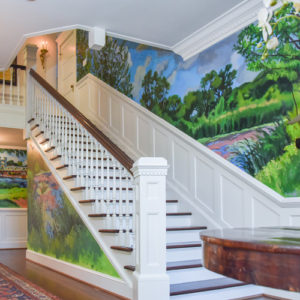 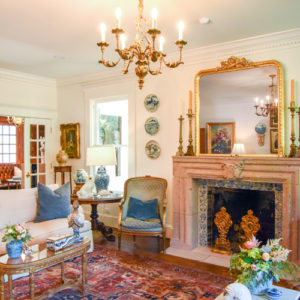 “It’s a cute little English Tudor cottage with a sloped roof,” she said. “We found this house and thought it’d be a fun project.”

Also on this floor are two doors tucked away behind the stairs. One opens to a back staircase that takes you directly to the kitchen, and one is a covert back passageway to the master closet.

The largest remodeling project on the first floor took place in the kitchen. Schorlemer has the home’s original blueprints that show a very compartmentalized space — a small entry room off the back door, a galley kitchen and stove and a room for the icebox. When they bought the home, the kitchen had already been opened up and dark wood cabinetry had been added by previous owners.

“We wanted it to be white and bright,” Schorlemer said.“And I wanted a pantry. It didn’t have a pantry.” A small room that was previously accessed only through the bar area now has a pocket door that opens up into the kitchen, and this became the pantry. Just off the kitchen is a bar area that has blue cabinets, open shelving, a bar sink and quartz countertops.

At the back of the house is a sunroom, which used to be a porte-cochere, but it had already been enclosed and French doors added when the Schorlemers bought the home. There was also a deck off the sunroom, but Schorlemer said they opted to remove that and instead built a gray flagstone patio and a large outdoor fireplace, complete with a wood beam mantel and a towering chimney. Similar to the new staircase, the fireplace was painstakingly designed to match the home’s exterior, including the white brick and the chimney’s step-out detail.

On the main floor, there’s also a formal dining room, the study, a half bath, the laundry room and the living room. The home doesn’t have the casual family room you might see in most homes, so Schorlemer said her living room needed to be multipurpose. At first glance, it’s easy to see how the family uses it as a space to entertain guests, but when Schorlemer explained it’s also the place they hang out and watch TV, the first question might be, “Where is the TV?” 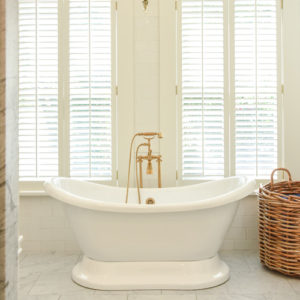 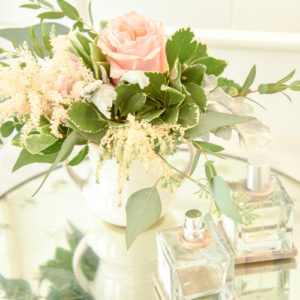 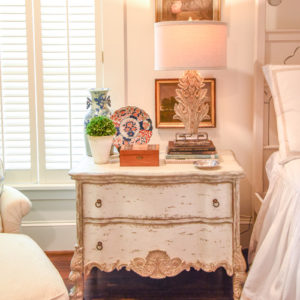 The TV is actually above the mantel and concealed behind a two-way mirror.

“[The tiles are] all biblical scenes, which is kind of fun,” she said. “My priest came over and helped me put them in order. There’s the Old Testament on the left and the New Testament on the right and the life of Jesus across the top.”

Besides the charm of an old home, the surrounding woods of Cameron Park also drew the Schorlemers to the home. “We just love being in the park and close to the river,” Schorlemer said. In fact, they love it so much, they decided to bring the river inside by commissioning a landscape painting from local artist Sean Oswald. Along the walls of the foyer and staircase is a continuous mural that depicts various views of the Brazos River area. 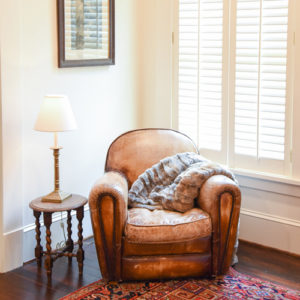 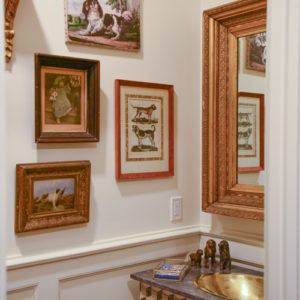 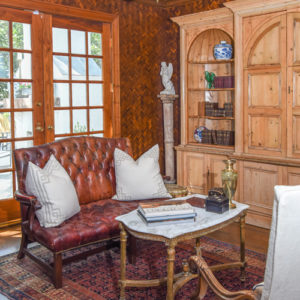 The left side of the room is a view from Cameron Park East, and on his Instagram page, Oswald shared, “Here you are standing in the grass beneath the canopy of the trees, and the limestone cliffs are in the background. This image was meant to put the viewer into a place of smallness in relation to the cliffs.”

The mural is one of Schorlemer’s favorite things in the home, and she said she really enjoys being able to stand in her entryway and see the park peeking through the home’s windows while simultaneously being surrounded by the outdoor scenes painted on her walls. 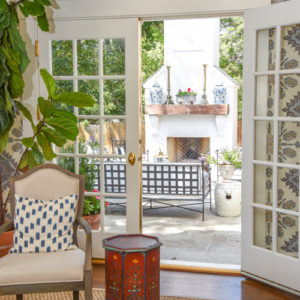 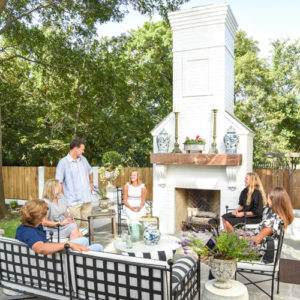 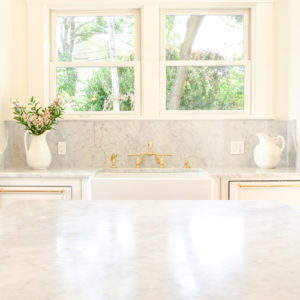 Schorlemer describes her aesthetic as traditional but eclectic, so when it came to light fixtures, accents and furniture for the home she spent a lot of time antiquing at the LaSalle Shoppes in Waco as well as shops in Clifton and Round Top, where the family has a second home. She also regularly hunts for home decor locally at Lane’s on Austin Avenue, James & Reid Home Antiquities, Honey’s Home and Style and Home Shack.

“I like different time periods and different countries,” she said. “I just like beauty, you know? So, I can appreciate all different styles. I have a mother who just had beautiful homes, so I learned an appreciation for beautiful things from her.” 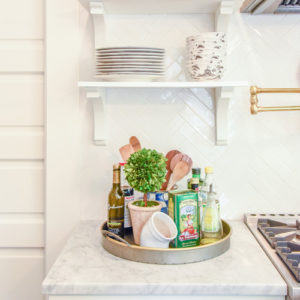 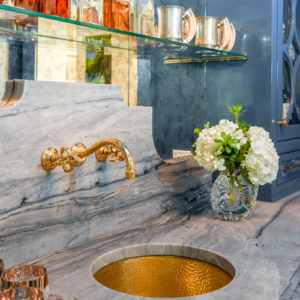 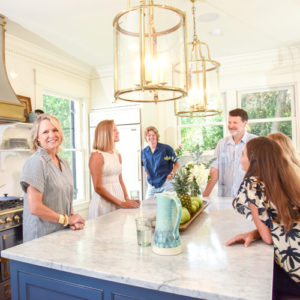