When Kimberly Nielsen built her house in Woodway she had big plans for her home office. It was going to be located off the kitchen and dining room, and she would be able to work from home, running the two Genie Car Wash locations that she owns. She would swivel around in her chair and watch her three dogs — Murphy, Joy and Bentley — play in the backyard or watch the action on the tennis courts just beyond her fence.

It didn’t quite work out that way. The home office is there, but it’s usually Nielsen’s children who are on the computer. But that’s OK with her.

“I had a big dream,” she said. “I go to work a lot, and I can get a lot done when it’s quiet and the phones aren’t ringing and people aren’t coming into my office. I would go to the office a lot at night, and my kids would complain about that. I thought I would build a home office. This is my home office, which is not my home office. It’s my children’s office. There’s a computer upstairs, and they have their own space, but this is where they do all their homework. My kids are always just around and want help with homework. In the evening this is where they live — and at the [kitchen] island.”

Nielsen has been in her new home for about a year, and she built it with her children in mind. She wanted a space that was comfortable and welcoming for her three kids — Katy Lou, a senior at Midway High School; Maggie, a freshman; and Lane, a seventh-grader at Midway Middle School — and their friends.

“It needed to be kid-friendly, where kids want to hang,” she said. “I always have a house full of teenagers.”

Katy Lou said her mother is “definitely” a cool mom, and the door is always open for her friends.

The large wooden dining table can seat 10 comfortably, with its two white slipcovered end chairs, four ladder-back chairs and one long bench. Even more people have gathered around the table on occasion, such as in June, after Katy Lou and other youth from First Baptist Church of Woodway returned from a two-week mission trip to Africa.

“When Katy Lou got back from Africa, we had some people over, and they all shared their stories. We dragged chairs up, and we all squeezed around,” Nielsen said. “We quite often fill [the table].”

If folks aren’t gathered around the kitchen table, then they’re congregated at the large island in the middle of the kitchen. A six-burner cooktop and double ovens are on one side of the island, with white cabinets hiding countertop appliances. 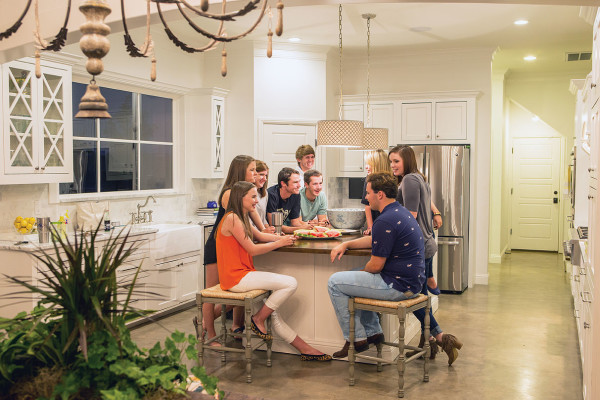 “My kitchen is where I spend the most time,” Nielsen said. “I love to cook. It’s the hub of my house.”

Most nights you will find Nielsen and her children dining on some variation of meat and potatoes, with chicken and fish often finding their way into meals as well. And most of the food is prepared on the stovetop, with Maggie, who inherited her mother’s love of cooking, pitching in. Nielsen admits that she doesn’t grill very well.

“I need to master grilling,” she said.

A six-panel window above the sink dominates the opposite wall, drenching the kitchen with natural light. That’s a common theme throughout the house. Most downstairs windows are without shades, allowing light to reflect off the white furniture and polished concrete floors.

“I want my house to be really bright. I have all these windows, and as you see, I don’t really have any coverings. I do in the bedrooms but not anywhere else,” Nielsen said.

The concrete floor wasn’t in the original plan for the house, but Nielsen accepted it — and its lower cost — to allow for upgrades elsewhere.

“After I got through pouting for a while, I said, ‘If I have to have them, I want them really light.’ When the guy came to stain them, I said, ‘I want them as light as you could get them.’ When he came back to polish them, he loved them. He loved the outcome of them,” Nielsen said. “The upkeep is beautiful. I have three dogs, one who has a lot of hair. Kids in and out. It’s indestructible. It’s super easy to keep. If you have a vacuum or dust mop, it’s golden. They are so easy to maintain. I have fallen in love with them.”

Ease of maintenance was a factor in choosing furniture as well.

“All my furniture is white, and I love it,” Nielsen said. “It’s the easiest to maintain. All you need is Clorox. Everything is white. Everything goes in my washer. It’s all pretty easy maintenance.”

The home has two laundry rooms, one on the main floor and the other upstairs. The lower laundry room is in Nielsen’s closet.

“It’s the best thing ever. I never have dirty clothes,” Nielsen said.

The master bedroom is just off the home office and is furnished with white linens and a few splashes of pink. The adjoining bathroom — “I do have blinds in here,” she said — features a large glass shower and a soaking tub. 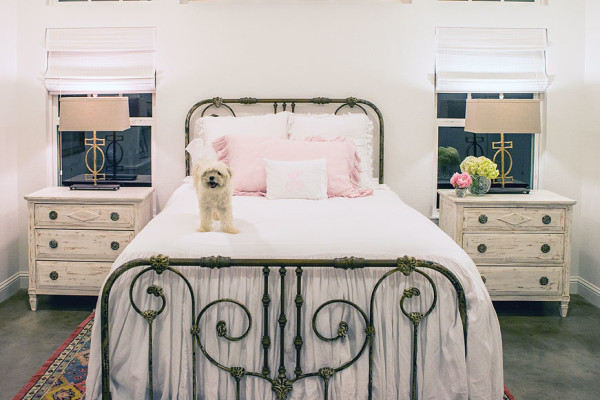 “I’m a bath kind of girl,” said Nielsen, who grew up in the Grapevine area and moved to Waco to study business at Baylor University.

The upper floor is the domain of the children, with two bedrooms and two bathrooms. Nielsen said she considered building a four-bedroom house, but with her oldest child leaving soon for college, she decided on three bedrooms. And it really wouldn’t have mattered if she had added another bedroom — the girls would have ended up together anyway.

“They’ve always shared a room. Even though they’ve had their own rooms, they shared,” Nielsen said.

“I wanted my own closet, but I didn’t care other than that,” Katy Lou added. “I love my sister’s company.”

The bedroom has matching beds and bookcases, and the girls share a bathroom. The ceiling is large enough for two ceiling fans and a large brass fixture with four candle lightbulbs. Along with most other of the lighting fixtures in the house, it came from a source in Atlanta, Georgia.

Nielsen said the girls’ room is her favorite in the house because of its view, with the neighborhood visible from windows on one side of the room and the development’s tennis courts and beyond visible from the other.

“You don’t realize that this area is so hilly,” she said. “We sit up on a hill. Because [the girls are] upstairs, they can see both ways. It’s really pretty, with big windows on both sides of their room.”

Maggie, Katy Lou and their friends often take advantage of those windows, but not just for looking through. They often climb out and sit on the roof of the lower level.

“We hang out on the roof a lot, right out of our windows,” Katy Lou said. “Is that weird?”

“You can see the stars perfectly out here,” Katy Lou said.

Lane’s bedroom and bathroom are also upstairs, as is the home’s second laundry room. The children are responsible for washing their own clothes there, and that’s the only space that Nielsen says she wishes was different.

“None of them like their T-shirts dried,” she said. “When you’re drying T-shirts for three people, I didn’t really take that into consideration, just the flow of three people doing laundry. With three teenagers, that’s a lot of dirty clothes. So I should have done that differently.”

Other than that, Nielsen loves the place her family has called home for about a year now. But truth be told, she really had no desire to live in an area of new homes, like where she lives now. Her last two houses had been in older, established neighborhoods in Waco. She was in what she called an “old, little cottage-y looking house” in Castle Heights for five years.

“I loved the house,” she said. “It was a great, great house, great neighborhood. There are a lot of good memories in that house.”

But when her family outgrew that small space, they moved to a much larger house on Wooded Acres Drive. Nielsen was in the Wooded Acres house for about eight years.

“The style of that house was a lot different,” she said. “The house was pretty open. It had a lot of color in it. It wasn’t all white.”

But the biggest difference, she said, was the amount of work the yard required. The house was on a little more than a half-acre.

“I had a really sizeable yard with lots of trees,” she said. “It was lovely and made for a really pretty yard. But it was lots of yardwork and upkeep. We did lots of raking.”

When she decided to build, Nielsen said she drew the layout and elevation of the house that she wanted, but it was kind of a rough sketch. Her dad took her drawing, improved on it a bit and turned it over to an architect.

As far as the style of her house, “I just wanted it to be really clean and simple,” she said. “We vacationed in Florida on the beach, and I love this style of the homes there. They’re similar to this in some ways. I love it there, and I love that kind of style. That’s where I got my inspiration.”

Nielsen said her brother-in-law, who builds homes in Fort Worth, was the original contractor for the house, but she quickly realized that someone needed to be on-site daily. So she and her dad took over the duties. Her parents, Dale and Lou Mathews, live in Waco.

“My dad and I had a great time working together, and we worked really well together,” Nielsen said. “He can tell you where every wire is, where every pipe is — he can tell you all of that. I was more concerned with the aesthetics, what it’s going to look like.”

Still, “building is what people say it is,” she added, with the biggest challenge being finding “quality work and good labor.” For that, she would often call her friend Joanna Gaines to get names of folks to handle certain tasks.

“We had some hairy moments, but we got through it. It doesn’t seem so bad now, but at the time it did. It took awhile,” she said.

But, Nielsen pointed out, the longer the job took, the more money she saved. During the building process, Nielsen and her three children and three dogs lived with her parents and their two dogs.

“They live in a little bitty house,” she said. “It’s a lot of people, but we still love each other. We made it. The kids got in trouble for not keeping their rooms clean. That would be the worst hiccup. They still haven’t mastered the importance of making their beds every day.”
In their new home, Nielsen and her kids live a mile-and-a-half from their church, First Baptist Woodway.

“I chose [this area] because I wanted a smaller lot. I was going back to work in a full-time capacity, so I needed something more manageable,” she said. “It has the amenities. It’s pretty central, and my kids use the pool a lot. It had everything that we wanted. And it’s a friendly neighborhood.”